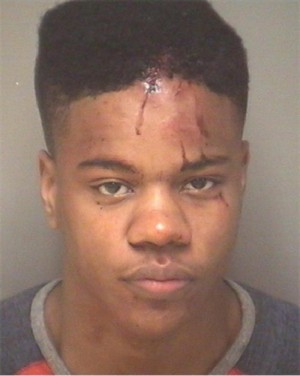 Martese Johnson, a 20-year-old African American, has been added to the already too-long list of victims of brutal, racial profiling by the police.  Unlike the stolen lives of Michael Brown, Tamir Rice, Ramarley Graham, Jessie Hernandez and countless other youth of color, Johnson survived to bravely tell the world that his Black life matters.

Johnson is a University of Virginia (UVA) junior and an elected representative to the Honor Committee, where he serves as vice chair for community relations at the school.  He was violently attacked by three white police agents of the Virginia Alcoholic Beverage Control (ABC) in the early morning of March 18 outside the Trinity Irish pub, adjacent to the campus.

In Virginia, there are 100 statewide agents who have been assigned full police powers to deter underage drinking and enforce liquor laws in the state’s bars and restaurants.  The campus administration requested that the agents monitor underage drinking mainly among fraternity houses, where women are routinely sexually assaulted during parties.

In this instance, Johnson was arrested on misdemeanor charges of “obstruction of justice” and “public intoxication” after he was refused entrance to the pub.

The co-owner of the pub, Kevin Badke, stated that Johnson was “cordial” and “respectful” and was not intoxicated when he was refused entrance to the pub because he did not verbally give the zip code that exactly matched that on his Chicago ID. (abcnews.go.com, March 22) Moments later, Johnson was attacked by ABC agents.

A video was taken of Johnson, with his head bloodied, forced to lay on his stomach with three police officers’ knees on his back, and being handcuffed.  He said repeatedly, “I go to UVA,” and, “This is racist,” as horrified onlookers saw the assault.  Johnson was so badly hurt that 10 stitches had to be applied to his head.

As the images of the police assault went viral on social media, especially on Twitter under the #BlackLivesMatter, at least 1,000 angry students spontaneously gathered outside of the bar in solidarity with Johnson.  The protest mushroomed to such a degree that an emergency meeting was held at Newcomb Hall on UVA’s campus between mainly Black students, local police chiefs and even Virginia’s Secretary of Public Safety and Homeland Security Brian Moran. The students wanted to know why three white ABC officers brutalized Johnson.  When they did not get the answers they sought, more than 100 of them stormed out of the meeting shouting “Black lives matter!”

The students marched to the African-American Affairs Office across campus, chanting “No justice, no peace! No racist police!”  Johnson was marching with them and spoke at their rally.

Not an isolated incident

Aryn Frazier, an activist in the campus-based Black Student Alliance, stated at the same rally, “These incidents are not isolated.  Not in Charlottesville, not in New York and not across the nation. Instead, they are products of a very sick justice system. Though what happened to Martese is horrible, it has been a problem in Charlottesville long before this. If we don’t do something right now, we are going to have it long after.” (Washington Post, March 20)

What happened to Johnson is part of the ongoing racist legacy of the UVA, which was founded in 1819 by Thomas Jefferson, a slaveholder.  The school was built on the backs of enslaved African people.   In 2007, the university’s governing board approved a resolution of “regret” for the school’s superexploitation of slaves.

But as the treatment of Johnson shows, the legacy of white supremacy is alive and well on UVA’s campus and in the Charlottesville community.  For instance, in 2004, the Charlottesville police asked Black men to “voluntarily” provide their DNA samples as part of a search for a serial rapist.

Black students also point to the double standard of treatment by the police and the media, as in the cases of two missing youth.     Hannah Graham’s case gained much notoriety.  She was a white student who was missing for five weeks in 2014 until her body was found.  A similar case in 2012 concerning a missing local Black teenager, Dashad “Sage” Smith, has gone virtually unnoticed.

Due to the pressure of the growing protests by Black students and their allies, the school administration has called for an investigation of the ABC’s intimidating tactics.

The Johnson incident brought to light what occurred in April 2013 with another UVA student, Elizabeth Daly.  The ABC confronted her at gunpoint for supposedly illegally transporting beer. It turned out to be sparkling water.  She won a lawsuit against the ABC and was granted $200,000.

Black students, who are about 6 percent of the UVA’s 16,000 undergraduate student population, have complained of being racially profiled in the bar area known as the “The Corner” and also in the fraternity house section.