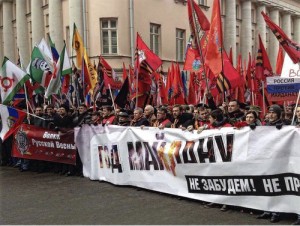 Moscow march against fascism in Ukraine

Moscow — As I arrived at the Hotel Metropol in Moscow, directly across from the entrance to Red Square, I saw the AntiMaidan demonstration being set up to commemorate the one-year anniversary of the neofascist coup in Ukraine, whose social support came from regressive demonstrations in Maidan Square in Kiev.

Nearly 100,000 people marched in Moscow, representing various political forces in Russia, including the Communist Party of the Russian Federation, Russian veteran organizations, Greens and Nightwolf Bikers, among many others. Their aim was to send a message that a “Russian Maidan” or a color “revolution” orchestrated by Washington or a Western non-governmental organization would be resisted. It was a show of strength among what could be referred to as patriotic Russian elements.

I went to Moscow as part of a small delegation of peace activists from the United States. Our goal was to demonstrate that among working people of all countries, cooperation is possible and in our best interests. The other delegates were Óscar Hernández-Santoyo of Milwaukee, an immigrant rights activist with “Youth Empowered in the Struggle,” and Joe Iosbaker, of the Rasmea [Odeh] Defense Committee and the Committee to Stop FBI Repression.

In the last few years, the mouthpieces of the Pentagon and State Department and their obedient media have once again begun hyping up the imaginary threat of the great Russian bear in the Kremlin, endlessly plotting the demise of the so-called “Land of the Free.” As Russia has begun to get back on its feet after the overthrow of the Soviet Union and the abolishment of socialist measures during the turbulent 1990s, it has once again started to stand up for itself and its allies. Russia’s defense of Iran and Syria from U.S. imperialism, while based on self-interest, is nevertheless very much appreciated by these countries as well as by anti-imperialist activists around the world.

With the Russian government refusing to be pushed around at will by the U.S., it is facing “consequences.” Since 1990, NATO has expanded into 12 countries in Eastern Europe and the former Soviet Union, most of thom are former members of the Warsaw Pact, which was the military alliance of the Soviet Union and its allies. NATO is thus encircling Russia militarily and politically. The goal is to intimidate and apply pressure on Russia, just as the U.S. did to the USSR decades ago, which had a significant role in the USSR’s dismemberment.

The result is a game of chicken between the world’s largest superpower and its NATO military bloc on one side, and Russia on the other. Russia’s large military is designed to defend Russian territory. The U.S. Armed Forces, on the contrary, stretch across a myriad of bases littered around the entire globe. Should Washington’s aggressive stance lead to conflict between two nuclear powers, it could mean the end of humanity.

Our host during our stay in Moscow was Alexander Ionov, president of the Anti-Globalization Movement of Russia. This is not a homogenous organization representing one ideological current. Some of its members subscribe to Korean socialism and some are “Putinists,” that is, champions of the Russian president, among other tendencies. The underlying current among the membership is staunch opposition to Western imperialism and the belief that all nations have the right to self-determination.

On the wall in the group’s office are framed photographs of Hafez and Bashar Al-Assad of Syria, Kim Il Sung of socialist Korea, Hugo Chávez of Venezuela, Fidel Castro and Che Guevara of Cuba, Moammar Gadhafi of Libya and Omar Torrijos of Panama — all political leaders that U.S. imperialism has demonized.

In Donbass, the southeastern region in Ukraine that is in revolt against the Kiev regime, the U.S.-armed and -directed Ukrainian army indiscriminately bombs the civilian population. In the last year, an estimated 6,000 people have died in the fighting, many of whom are noncombatants.

While in Moscow, I visited a hospital where seven Ukrainian children are being treated for injuries sustained in the shelling. One was a 10-year-old boy named Vanya, who is a famous case. One day when Vanya and his five-year-old brother were playing outside in the garden, the junta’s shelling struck their home, bringing it completely to the ground. Vanya’s brother died, and Vanya’s legs were blown off, he lost one arm, and he was entirely blinded by shrapnel.

We visited others whose conditions were not as serious, but whose lives will be forever altered by this conflict that they had no responsibility for starting and had no say in. The head doctor at the facility has publicly called for Ukrainian President Petro Poroshenko, President Barack Obama, German Chancellor Angela Merkel and Russian President Putin to conduct their negotiations over the conflict near Vanya’s hospital bed, so they can be aware of the human toll at stake and to highlight who is bearing the brunt of the suffering.

Most of the attendees at the Anti-Globalization Movement conference held in Moscow in late February were young and belonged to the organization. Besides our U.S. delegation, there was a speaker from Iran and a Venezuelan Embassy representative. The declaration of the conference, which this writer had a role in drafting, was based on mutual cooperation among the various peoples of the world. This understanding shaped the character of the event.

From what I could see and ascertain, the Russian government does not seek conflict with the West, from which it can gain nothing. The sanctions imposed on them — which also affect the economy of the European Union countries — are mutually harmful to all parties, with the exception of a miniscule grouping inside the NATO sphere. The Russian ruling capitalists themselves, at this present stage, are primarily interested in commerce, and even German imperialists lose business because of the sanctions.

Russian capitalists are in no way capable of, let alone interested in, landing on U.S. shores or bombing U.S. cities as they are portrayed in the Western media. To believe such tales, one would have to be completely ignorant of the balance of forces vis-a-vis NATO. Russia does not have bases stretching across the world. It does not have troops in Mexico and Canada. The vast majority of Russia’s army is behind Russia’s borders.

We hope to further cultivate a relationship among the Anti-Globalization Movement, the Russian people and ourselves. To stop U.S. leaders from plunging humanity into a nuclear armageddon, we will be vocally on the side of those defending themselves from reckless imperialist aggression.

Tom Michalak is an activist in Detroit with the national youth group Fight Imperialism, Stand Together (FIST).