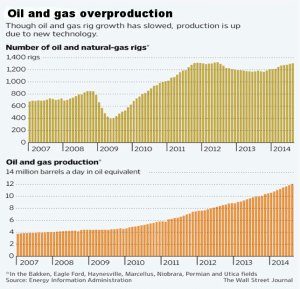 The big business media have been crowing recently about the fall in the prices of crude oil and gasoline. They promote the idea that this will help workers and play a part in reviving the economy.

Big business economists, on the other hand, are buzzing with concern that the fall in crude oil prices represents a world capitalist downturn that will threaten the anemic recovery taking place in the U.S.

What the economists know is that the drop in oil prices is a symptom of capitalist overproduction. The oil and gas industry was chasing after superprofits when, before last June, crude oil was still priced at $115 a barrel and gasoline was $4 a gallon.

They have been deep drilling and hydrofracking for oil and natural gas everywhere, from farmers’ fields to the melting Arctic Ocean, in order to cash in on high prices. When the smoke cleared over the last few months, the world was awash in oil and gas, but the world capitalist economy had begun a slowdown.

“Much of the improvement in demand has been driven by refiner profits and purchases of crude to keep in storage, rather than an increase in fuel use by consumers,” says the International Energy Agency. (Bloomberg News, March 18)

What the economists know is that the decline in the price of oil and gas is a sign of creeping global capitalist overproduction, which can lead to a decline in profits, production cutbacks, further lowering of wages and more layoffs — if not a full-blown economic crisis. They are worried that after trillions of dollars of government economic stimulus, with virtually free money given to the bankers and bosses at close to zero interest rates, there is no economic boom and no rise in inflation. This is what would happen if there were a normal recovery.

The drop in oil prices cannot be isolated from the general decline in commodity prices globally. According to the International Monetary Fund Indices of Primary Commodity Prices of March 12, commodity prices have dropped not just in oil, but in a wide array of nonfuel commodities over the last four quarters.

For example, China had its slowest economic growth in 24 years in 2014. Its oil imports for January declined by 8 percent from the previous month. The Market Realist of Feb. 24 revealed: “An unexpected fall in most of China’s commodity imports indicates that the largest economy in the world is still losing momentum.”

Seven years after the global financial and economic crisis struck the capitalist world, and five years after the so-called “recovery,” capitalism is still at a dead end — stuck in a condition of mass unemployment, wage suppression and slow-to-no growth. The decline in commodity prices flows from the global capitalist slowdown.

The 19 eurozone countries and Japan are struggling to keep out of recession. U.S. capitalism is struggling, unsuccessfully, to get into strong growth mode. Russia is in a recession. Brazil, the seventh-largest economy in the world and the largest in Latin America, has slowed down to an almost no-growth quarter. South Africa grew only 1.5 percent in 2014. Indian capitalism is struggling to hold onto its 7.5 percent growth rate, while poverty stalks hundreds of millions there.

It is hardly any wonder that commodity prices are sliding, as global capacity for production expands and global demand from the workers and the middle class contracts.

The IMF has revised its estimate of world economic growth down for the year 2015. The March 12 report shows a decline in prices in the last three to four quarters in every economic category: agriculture, food, vegetable oils, meat, agricultural raw materials, metals, etc. Prices declined in everything from copper to iron ore, coal, lumber, cereals, lamb, sugar and cotton.

This is a sure sign of growing capitalist overproduction — decline in the ability of the masses to buy the products they create, competitive pressure on the capitalists to hold back price increases in order to protect market share, and growth in the ratio of unused means of production and services.

Why price declines are a threat: the Marxist view

What Wall Street and the bosses are worried about is that the slowing increase in prices, which means slowing inflation, will turn into an absolute decline and trigger a global crisis.

If prices begin to decline, the bosses are deprived of the ability to raise prices in order to sustain their profit margins. If they can’t do it by raising prices, the only ways left to them, as capitalist exploiters, are to lower wages, speed up production, cut benefits or get rid of workers. Instead of raising prices, they lower costs. And the only cost they control and can lower is the cost of labor. If they take losses, they will shut down altogether.

For  workers it is best to understand the danger from the point of view of working-class economics: the Marxist labor theory of value.

What are prices and how are they set? The capitalist sets the price. There is no guarantee that the commodity or service will be sold at that price. But here is how the price gets arrived at.

Under normal conditions the boss, or multinational corporation, sets the price in order to get back all the costs of production or service plus a profit. The profit consists of the unpaid labor time of the workers.

In creating new products, the workers add new value. The value the workers need to live on is created in just one part of the work day.  But the workers must work the whole day — or the whole week or whole month, depending on the working arrangement.

The boss then sells everything created, pays the workers their wages and keeps the rest of the money, which includes the value of unpaid labor. That surplus value goes to the boss when the product is sold for a profit.

The boss must also pay the other costs of production, beside wages. These costs cannot be gotten around: materials, technology, shipping, etc. The prices of these products have been set by other capitalists and cannot be changed. So after selling all the commodities, whose value has been created by the labor of the workers, the boss must pay off all the vendors who sold him things. What is left over is the profit — or the value, in money, of the unpaid labor of the workers.

But suppose the price set by the boss to bring a handsome profit is too high to find buyers. Suppose the workers and the middle class cannot afford the price set by the boss. Then the boss has to drop the price. But the boss still has to pay off the landlord, the bankers, the vendors, etc. If the price is so low that it eats deeply into profits and the boss has to use up what was supposed to be profit or surplus value, then costs must be lowered. Wages have to be lowered, workers have to be laid off or, in drastic cases, the whole enterprise has to be shut down.

This is why the capitalists fear “lowflation” as they call it, or falling prices that squeeze their profits. And workers should be concerned about this threat to their own class interests even more.

The Toronto Globe and Mail of Jan. 23 summed it up: “The bottom line, economists say, is that the global economy still has excess capacity. While many economies, especially in the developed world, shed substantial capacity during the recession’s deep downdraft, there is more capacity to produce than there is demand for that output. The IMF estimates that the world’s advanced economies are still operating at about 2.5 percent below their capacity — and chronically below-normal global growth means demand hasn’t been sufficient to close that gap.

“The continued overcapacity has meant little need to hire more workers. The International Labor Organization reported this week that the global labor market still hasn’t fully recovered what it lost in the 2008-09 crisis. It said global employment is 61 million jobs below its long-term trend line, reflecting the gap that opened up during the crisis and has never closed. The global unemployment rate of 5.9 per cent is still above pre-crisis levels (5.5 percent in 2007), and the global labor force participation rate remains below pre-crisis levels, indicating that an additional nearly 40 million people worldwide have abandoned looking for jobs entirely.”

The international workers’ movement must prepare to resist a new round of attacks signaled by creeping capitalist overproduction. The fall in commodity prices may be a harbinger of just such an attack.