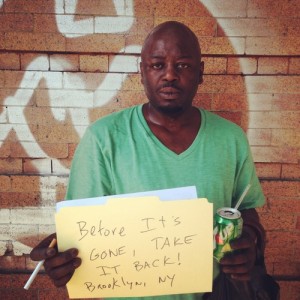 Brooklyn, N.Y. — Residents of the Fort Greene, Bedford-Stuyvesant and Clinton Hill neighborhoods of Brooklyn are facing a crisis of gentrification. On Feb.22, organizers with “Before It’s Gone, Take it Back: Documenting Brooklyn, Fighting Gentrification” (B4G) met with 60 residents of the area to launch a web-based and direct action “This Is a No-Eviction Zone” campaign.

The resident-led group “Equality for Flatbush” initiated “This is a No-Eviction Zone.” Its six-point platform calls for Brooklyn residents to stand with their neighbors “against foreclosures, forced evictions, buyouts and price-outs” by supporting and/or participating in “lawsuits, letter-writing campaigns, picket lines, rent strikes, eviction blockades, lobby days and other tactics to hold corporate developers and greedy landlords accountable.”

The platform also calls on residents to support and patronize “businesses that are essential to low-to-middle-income people in my neighborhood” and “to pledge not to allow the NYPD [the New York Police Department] to unlawfully harass or violate the civil rights of my neighbors or myself. … Studies have shown that gentrification and police harassment go hand in hand.”

Flyers, stickers and window signs in Spanish, Urdu, Russian and English were distributed to the crowd.

B4G meetings are scheduled for other impacted neighborhoods in Brooklyn, including East New York on March 29 at 3 p.m., co-sponsored by Crystal House, an East New York project of the Malcolm X Grassroots Movement, and Flatbush on April 18, at 6:30 p.m., at the Third Root Community Health Center.

On March 17, the Brooklyn Pride Center is hosting a B4G organizing forum on gentrification for lesbian, gay, bisexual, transgender and queer Brooklyn residents. The meeting will kick off a 10-week series entitled “Documenting Queer Brooklyn: Before It’s Gone, Take It Back.”

A main goal of the B4G project is to launch a website hub — beforeitsgone.com — that would serve as a self-documentary art archive for Brooklyn residents to share stories celebrating their lives and resilience in the wake of gentrification. The site would also provide vital housing, legal and organizing resources to help keep Brooklyn residents in their homes. Currently, organizers are engaged in a series of fundraisers and a crowdsourcing campaign to raise $8,000 by May 1 in order to finish construction, gather resources and launch the site.

According to the “Equality for Flatbush” Tumblr page, gentrification is defined as a “concerted and deliberate effort to price out low-to-middle-income residents from neighborhoods by city government, corporations, real estate developers, and landlords in favor of renting, selling, and catering to people of higher and/or more

flexible incomes. We know from first-hand experience that the same unscrupulous property owners who use tactics to force longtime older tenants of color out of their rent-stabilized apartments will turn around and illegally overcharge incoming younger white tenants for the same apartment. For this very reason, we believe that all of us —

longtime and new residents, communities of color and white communities, low-income and middle-class people — have a stake in the urgent struggle to save affordable housing in Brooklyn.”

Victor Moses, a 24-year-old resident of East Flatbush and recent Morehouse College graduate, says: “I was born and raised in Brooklyn. My heart has been set on living and starting a family here, like my parents did. But with rents the way they are, I can’t manage that. That is something that I can’t and won’t accept — that’s why I fight.”

Katie Hydell, a 34-year-old special education teacher who is a new B4G organizer and has lived in Bushwick for the last two years, says: “I believe that affordable housing is a human right for all. It is time to show the people at the top that having all the money does not mean having all the power and we will fight until we win.”

Brooklyn residents can receive “No-Eviction Zone” signs, flyers and stickers, schedule a community meeting and get involved in the campaign by calling or texting Equality for Flatbush at (646) 820-6039 or en español (513) 445-8532. Emails can be sent to

The Equality for Flatbush project (E4F) is a people of color-led multinational grassroots organization which does anti-police repression, affordable housing and anti-gentrification organizing in the Flatbush and East Flatbush neighborhoods of Brooklyn. E4F was founded in June of 2013 and seeks to “organize our communities for social change and justice through street outreach, social media campaigns, political advocacy and direct action.”