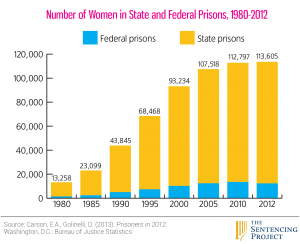 Women are the fastest growing prison population in the U.S. due primarily to harsh sentencing for nonviolent crimes and drug offenses. Over the last three decades the number of women incarcerated has mushroomed, though they account for less than 7 percent of the country’s 2.4 million inmates. This gives the U.S. the highest proportion of prisoners of any country in the world.

“There are now more than 200,000 women behind bars and more than one million on probation and parole,” reports the American Civil Liberties Union. “Many of these women struggle with substance abuse, mental illness, and histories of physical and sexual abuse,” as well as desperate poverty leading to crimes of survival. (aclu.org)

Another reason for the skyrocketing number of women in prison is the criminalization of domestic violence, which affects between 85 percent and 90 percent of women in prison. Child abuse and sexual violence put them at risk because their survival strategies often include illicit activity driven by threats of violence or coercion. Also, laws passed to help protect women victimized by male partners are subsequently used against them, as in the case of Marissa Alexander.

Alexander was imprisoned for three years for shooting off a gun to prevent an abusive ex-spouse from coming near her and their children. As of Jan. 27, 2015, she must spend two more years in house detention while wearing and paying for a surveillance ankle monitor. (See fact sheet about domestic violence on ­freemarissanow.org.)

If recent revelations about violent conditions at Attica prison in upstate New York or Rikers Island in New York City are horrific, women prisoners are forced to live in equally sordid, sadistic and punitive conditions, according to the 13 in-depth narratives in “Inside This Place, Not of It.” One of the women quoted a guard as saying, “As long as no one dies on my shift, I don’t care what you do to each other.”

Though the Hollywood stereotype is of prisoner-on-prisoner violence, that is not the case. Institutionalized abuse can be traced to the capitalist system itself, with the guards as front-line soldiers protecting ruling-class private property.

In the book six women discuss health issues: a forced, medically unnecessary cesarean; ovaries involuntarily, unknowingly removed along with cysts; no care for diabetes and cirrhosis; forced removal of a child following birth; no treatment for hepatitis C or mental illness; and misdiagnosis of HIV for which toxic drugs were taken for 17 years. In the last case, the prison refused to accept responsibility for the misdiagnosis!

Five of the women were raped by or forced to become sexual slaves of guards. At least three of them faced vicious retaliation by other guards when news of the secret relationship was exposed or the women brought charges against the guards. Retaliation continued when the women were transferred to other prisons.

But four of these women brought charges against their tormentors and stopped the abuse. Another woman reported such widespread opposition by inmates to invasive genital searches in Colorado that the state finally ended them.

Four of the inmates, who can only be heralded as survivors who found strength and self-esteem despite the system, are working to help others. As one summarized, “If I can help anybody avoid what I went through, that’s what it’s all about.”

One woman, a 16-year-old who received a life sentence for murder and became addicted to heroin in prison to numb her pain, but who eventually kicked her habit, started a program to help other juvenile offenders in prison. “Because of my case, my son [16] advocates … on behalf of youth getting a second chance. … Me and my son, we’re working together to change things.”

But the only way to really change things is to “tear down the walls” and the corrupt, criminal capitalist system that relies on racism and mass incarceration at home while waging wars aboard.