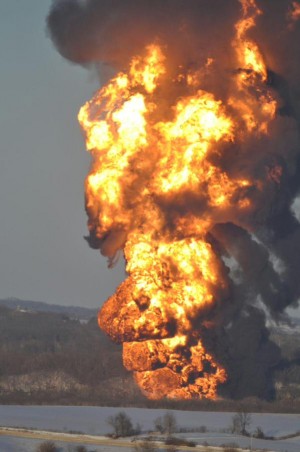 March 7 — In the past three days, two trains carrying crude oil derailed and exploded in North America, one March 5 in northwestern Illinois near the Mississippi River and one March 7 in Gogama, Ontario, the second such incident in Canada in three weeks. These wrecks follow a fiery explosion February in West Virginia and a January derailment in Philadelphia.

When a CSX train carrying 3 million gallons of North Dakota crude oil derailed in Fayette County, W.Va., on Feb. 16, huge fireballs shot hundreds of feet into the sky, houses burned and at least 2,400 residents were evacuated. The train had jumped the tracks, sparking a fire that lasted over three days and left area residents worried about long-term water quality in a nearby river.

No one was injured in a remote area of northern Ontario on Feb. 15 when a 100-car Canadian National Railway Co. train carrying crude oil derailed and caught fire. In 2013, however, an unattended crude oil train rolled into the center of Lac-Megantic, Quebec, unleashing a major fire that destroyed dozens of buildings and killed 47 residents.

Federal authorities from the Department of Transportation predicted that these dangerous derailments could become commonplace in upcoming decades. The DOT anticipated an average of ten incidents a year costing billions of dollars and endangering large numbers of people. Beating that estimate, there have now been five such incidents in 2015 in just over two months.

There are currently no federal regulations for oil extracted by hydraulic fracturing in shale regions. The oil contains extremely high levels of volatile components, including propane and butane, from chemicals used in the fracking process.

The energy industry has resisted demands to extract these components from the oil prior to shipping, claiming it’s too expensive. The more gaseous mixture happens to bring a higher profit for the energy industry.

Since 2008, rail shipments of oil increased from 9,500 carloads to around 500,000 in 2014. The oil trains travel through towns and cities unprepared to respond. There has been “no corresponding increase in safety preparedness plans,” according to the Center for Biological Diversity.

A study by the CBD released Feb. 19 estimates that 25 million people in the U.S. live in the one-mile evacuation zone near rail lines, which is recommended by the U.S. Department of Transportation. When a tank car containing crude oil catches fire, federal guidelines call for the evacuation of people living within a half mile.

The study raised concern that oil trains routinely pass within a quarter mile of streams, lakes, wetlands, reservoirs, the Hudson, Mississippi and Columbia rivers, the Puget Sound, Lake Champlain and Lake Michigan. The CBD called for a moratorium on “bomb trains” until safety can be ensured. (biologicaldiversity.org)

In Philadelphia alone an estimated 704,000 people live or work within a half mile of CSX and Norfolk-Southern rail lines that run through the region. These tracks are traversed several times a day by mile-long trains with over 100 cars, most filled with oil from North Dakota.

Most people in Philadelphia are probably unaware that their lives are at risk. Local officials say they can do little to regulate the railroads, which come under federal jurisdiction.

Between 45 to 80 trains carrying shale crude oil travel through Philadelphia each week. The majority carry the volatile North Dakota crude. Two oil-train derailments already occurred in Philadelphia — one in early 2014 when several cars skipped the track and hung precariously over the Schuylkill River; the second in January when a CSX oil train left the tracks in a rail yard in South Philadelphia near Interstate 95.

Neither incident resulted in explosions or oil spills, yet both served to expose the city’s glaring lack of any viable evacuation plan or campaigns to raise public awareness of the potential risk. On the contrary, what has come to light is city officials’ reluctance to disclose the schedules of oil-trains on “public security” grounds.

Philadelphia public safety officials say they have an emergency evacuation plan, yet denied a 2014 right-to-know request from environmental activist Mary Donahue, who wondered what “they don’t want the public to know.” (Phila.com, Feb. 22) Other activists have questioned whether there really is a plan.

A public hearing on the danger of train derailments in Philadelphia is planned for March 12.

North Dakota crude oil production is over 1 million barrels a day and 90 percent moves by freight rail. Even if the Keystone XL pipeline were to be completed, it has a capacity to move only 830,000 barrels a day.

Fracking for North Dakota crude oil is a billion dollar business, and railroads

have become the primary method of transport to expanding East Coast refineries. The two richest men in the U.S., billionaires Warren Buffett and Bill Gates, have controlling shares in BNSF Railway and the Canadian National Railway Co. In 2014 Canadian National had profits of $59.2 billion.

While the overall number of train accidents in the U.S. has decreased in recent years, the number of dangerous crude-oil train derailments has grown. The trains carrying oil are longer, heavier and more difficult to control or stop. The train that derailed in Ontario in February was over a mile long and weighed 14,355 tons.

In many cases the aging railway infrastructure, especially bridges, was never designed to carry such heavy loads. Class 1 tracks have a weight capacity of around 286,000 lbs., or 143 tons. The Federal Railway Administration does not keep data on bridge inspections, and most states don’t employ workers dedicated to inspecting bridges.

The railroad industry has called for tighter regulations, and is receiving greater scrutiny from some government agencies. But the refineries and the oil industry that own the cars have resisted making changes, including upgrading tank cars, because that cuts into their profits.

Many of the initial accidents were blamed on outdated DOT-111 tank cars that were never designed to carry volatile crude. Changes in DOT regulations due to take place in May 2015 require the use of newer, supposedly more resilient CPC 1232 models. However, most of the recent explosive derailments involved these “safer” cars.

Also, simply reducing the speeds at which the trains travel through heavily populated areas may not solve the problem. The train involved in the Lac-Megantic disaster was stopped at the time.

Concern for human life and the environment must be put before the greed of the energy industry’s drive for higher profits. Until the safety issue is addressed there needs to be a moratorium on train transport of crude oil. Unless these corporations take measures to address growing safety concerns, millions of people remain sitting ducks — potential victims of corporate greed, just waiting for disaster to happen.