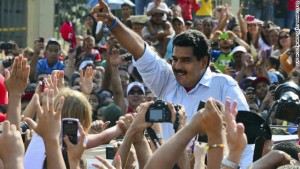 President Nicolas Maduro of Venezuela deserves the highest praise and support for firmly rejecting the latest round of U.S. pressures designed to undermine and topple the Bolivarian Revolution.

On March 9, the Obama administration announced more sanctions on Venezuela, calling the country and its leaders “an extraordinary threat to the national security of the United States.”

Such a declaration is not just an incredible, bold-faced lie. It is also the kind of language that allows branches of the U.S. government to step up their subversive efforts against Venezuela in very material ways — through economic sabotage, clandestine operations and outright military moves.

Maduro answered this attack, saying, “President Barack Obama, representing the U.S. imperialist elite, has personally decided to take on the task of defeating my government and intervening in Venezuela to control it.” He called it a “colossal mistake” and “imperialist arrogance” and saluted those Venezuelan officials facing U.S. sanctions as “heroes.” “I congratulate them,” said the former bus driver and union leader, adding that “it’s an honor” to be included on the U.S. sanctions list.

What is the Bolivarian Revolution anyway? It is a valiant effort by the Venezuelan masses and their leaders to break away from the domination of U.S. capital and reorient their country toward building cooperation with other nations in the region. It is a struggle to overcome the terrible heritage of centuries of exploitation, pillage of the land and extermination of Native peoples that characterizes all the Americas. It is a movement to unite all those who have been oppressed and exploited in order to establish new relations based on solidarity and mutual respect.

It was the election of Hugo Chávez to four terms as president, with mass support for his revolutionary plans, that opened the door for Venezuela to take on this role. For decades, this oil-rich country had been under the domination of the U.S. It was sharply divided between a small, very privileged class of well-paid servants doing the bidding of the imperialist oil monopolies, and millions of urban and rural poor, who lacked food, schools, medical care and any political input.

Chávez himself was hardened in his opposition to the sell-out governments when, as an officer in the military, he was called on to put down food riots in Caracas in February 1989. The Venezuelan people, even those in the capital city, were starving.

Today, the Bolivarian government’s subsidy of food prices, so everyone gets fed, is criticized in the imperialist media as a source of economic crisis. No, it is U.S. sanctions and the falling price of oil on the world market that have created difficulties for the Venezuelan people — that and the deliberate sabotage of the economy by counterrevolutionary elements who want to go back to the bad old days when the propertied classes lorded it over the masses. This elite has received all kinds of clandestine support from U.S. intelligence agencies.

Maduro’s charge that the U.S. has been trying to overthrow the progressive Bolivarian governments is no fantasy, despite constant U.S. denials and sugarcoating by the corporate media. Anyone interested in the details can readily find them on venezuelaanalysis.com, which publishes online extensive interviews with experts like former CIA officer Philip Agee, who describes in detail how such subversion works.

For example, the U.S. Agency for International Development — long known as a CIA front — has developed elaborate regime-change plans through its Office of Transition Alternatives. While always wrapping their bloody counterrevolutionary efforts in lofty terms like “promoting peace and democracy,” these documents, available through Wikileaks, confirm what Maduro and other Venezuelans are charging.

Now is the time! Be in the streets to support Venezuela and the Bolivarian Revolution!