Selma, Ala. — A jubilant, determined crowd of more than 100,000 people marched over the Edmund Pettus Bridge in Selma, Ala., from morning to afternoon on March 8 to mark the 50th Jubilee anniversary of “Bloody Sunday,” a key event in the Black Civil Rights struggles of the 1960s. 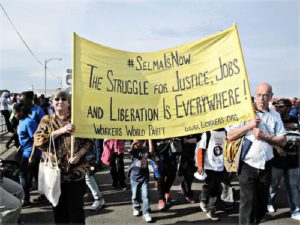 Represented was the complete breadth and depth of the Black nation within the U.S. — from revolutionaries to social clubs. People marched with their churches and with political organizations like the Southern Christian Leadership Conference and the NAACP. There were hundreds of Masons in formal black suits and white shirts and the Eastern Star women’s auxiliary in white dresses. There were contingents from historically Black colleges and universities, Black sororities and fraternities, and from Buffalo Soldier Motorcycle Clubs in New Jersey and North Carolina.

A huge GirlTrek contingent marched “for the health of our bodies, our families, our communities,” honoring the names of Nzinga, Harriet, Sojourner, Fannie Lou and Ella on the backs of their blue T-shirts. There was a group from Baltimore Bois, “working to create an alternative space for Black masculinity.” 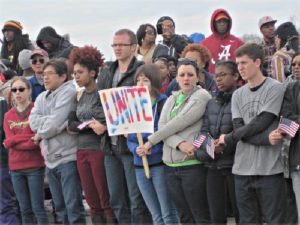 Representation of multinational working-class unity was strong, with many delegations present, including union machinists from Tennessee and Kentucky, local Montgomery workers with the National Association of Letter Carriers, Atlanta home-care workers building their “Raise Up for 15” campaign, and the Centro de Trabajadores Unidos en La Lucha (Center of Workers United in the Struggle), which is organizing fast food workers.

Nineteen busloads of United Auto Workers members from Detroit, Chicago and Greencastle, Ind., had come for the big rally the day before.

Other social justice groups marched, asserting solidarity and overlapping connections in struggle. These included an informal Muslim group carrying solidarity signs in Arabic, as well as Planned Parenthood, the Alabama Coalition for Immigrant Justice and a group calling for same-sex marriage rights.

Alabama has passed some of the most reactionary laws in the U.S. relating to immigrant rights and women’s reproductive access. Currently, the Alabama State Supreme Court is denying same-sex marriage rights in defiance of a U.S. federal court ruling.

Mary Stephens, a nurse from Macon, Ga., commented to USA Today that she would not describe the “Jubilee Weekend” as a celebration, saying: “It is a continuation of the fight we have had for the past 50 years, and more.” 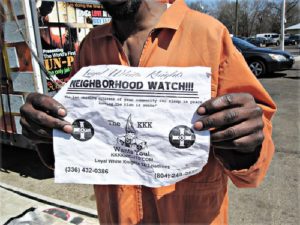 On “Bloody Sunday” in 1965, Alabama State Troopers and white supremacist vigilante squads brutally attacked a march over the bridge that was protesting the killing of voter rights activist Jimmie Lee Jackson. Stark images were seen worldwide of white police beating unarmed, nonviolent protesters with clubs, teargassing them and running them down with horses. The resulting wave of organizing, including the historic Selma-to-Montgomery march, built mass pressure that led to passage of the 1965 Voting Rights Act by the U.S. Congress.

Those rights have been steadily under attack in recent years. Important sections of the 1965 Act were voided by a 2013 U.S. Supreme Court decision in a suit brought by white voters from “white-flight” Shelby County, Ala. In speeches over the Jubilee weekend, former U.S. presidential candidate the Rev. Jesse Jackson said, “Selma was trumped and defeated by Shelby.” President Barack Obama and U.S. Attorney General Eric Holder conceded that voting rights were “under siege.”

Unacknowledged by these speakers is the increasing state repression of oppressed communities and against in-the-streets movement organizing.

In the fall of 2014, a full-scale police and military assault was launched against the African-American community of Ferguson, Mo., as people protested the killing of unarmed teen Michael Brown by a local white police officer. Protests against police racism and brutality subsequently spread nationwide and still continue.

Ashley Yates, a Ferguson activist with #BlackLivesMatter, commented to the Huffington Post: “Mike Brown is our Jimmie Lee Jackson. We’re still seeing this very real history living and repeating itself today. We’re seeing the tear gas. … We’re seeing people oppressed for standing up for their rights.”

Struggle in the streets

The struggle on the ground and in the streets continues — including in Selma.

In addition to legislative repression, the extralegal, white-vigilante Ku Klux Klan is still active in Alabama. On the morning of March 8, threatening Klan leaflets were discovered throughout Selma, including at a traveling display against prison expansion created by Michael O.G. Law of Philadelphia. The wheels of his truck were also sabotaged.

Robert Jones, the grand dragon of the Local White Knights of the KKK, admitted in an Al.com interview that the Klan left about 4,000 flyers in the Selma and Montgomery area over the last two weeks, with propaganda against immigration and “against King,” referring to Dr. Martin Luther King Jr.

A local group resisting this racist, divisive propaganda is Students UNITED, a multinational organization of students from elementary through college age. Their goal is to provide all Selma children, 60 percent of whom live in poverty, with more educational chances. With art and protest, they emphasize “UNITY” and explicitly denounce racism in Selma. They have participated in protest marches against a recent public memorial to KKK founder Nathan Bedford Forrest.

On Jubilee March morning, Students UNITED led a march of about 2,000 people to demand the renaming of the Pettus Bridge. Edmund Pettus was a Confederate officer, adherent of white supremacy and thought to be a Klan member.

Through the Jubilee weekend there was intense organizing for renewed, unified, grassroots struggle. At a series of workshops at the Brown Chapel AME Church, people came together to address problems of voting rights restrictions, immigration rights, pollution and environmental dangers, poverty and cuts/elimination of Medicaid, labor rights and lack of living wages, and the criminal injustice system. There were speakers on rights for lesbian, gay, bisexual and transgender people; unemployed people; and women.

The Rev. William Barber, president of the North Carolina NAACP, spoke for an “anti-racism, anti-poverty, anti–war agenda.” Rev. Barber is a leader of the “Moral Mondays” movement against austerity assaults on public services and needs.

There were powerful, militant attacks on the ruling class, and a call for building a people’s campaign for voting rights and against poverty.

The weekend was a momentous gathering together of mass movements — those who are in the streets now, together with Black Civil Rights and Nationalist “foot soldier” veterans who militantly fought and won against Jim Crow segregation.

In this gathering, people were striving for stronger unity and the possibility of tremendous motion forward. Their watchword was “March on!”

Minnie Bruce Pratt was born in Selma, Ala. Other contributors to this story were Dianne Mathiowetz, Jimmy Raynor and Anne Pruden.