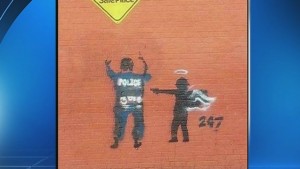 The mural was painted on the side of the Youthville building in Detroit.

The prosecution of two Metro Detroit youths, accused of painting a mural of protest against police brutality on a building in Detroit, continues with the next court date scheduled for March 17. Taylor Deramy and Marcellus Grey, both 19 years of age and African American, are currently charged with a felony, “malicious destruction of a building,” and could face 5 to 10 years in jail.

The mural was painted on the side of the Youthville building, a youth center whose mission statement says its role is to foster positive community ties for the youth of Detroit. The building is kitty-corner from the Detroit Police Department’s 3rd Precinct. The mural depicted a riot cop in a state of submission against the red-brick wall, being arrested by a silhouetted figure of a child-angel.

The stencil was sprayed, perhaps deliberately, under a yellow sign on the building that reads, “Safe Place.” The mural under the sign brings to mind all those slain by police nationwide. It reminds everyone how no place is a safe place when the systemic oppression of Black and Brown youth at the hands of racist authorities is commonplace.

The mural invokes the names and faces of Aiyana Jones and Tamir Rice, ages 7 and 12, and how they were suddenly taken from their families and community. Detroit Police Officer Joseph Weekley will not serve time for killing Aiyana, and Cleveland officers Timothy Loehmann and Frank Garmback have not been charged with Tamir’s murder — in spite of mounting evidence against them and global outcries for justice.

The racist double standard is in full swing against Grey and Deramy. This is hardly the first time youths have been reprimanded in a court of law for defacing or destruction of private or public property. In the past most cases ended with a slap on the wrist: probation and a stint of community service. When three white teens from Grosse Pointe Woods, Mich., sprayed crude, empty phrases on a building last year owned by billionaire Dan Gilbert, all received probation and community service.

Without permission, Gilbert ordered holes drilled in the walls of 1515 Broadway, a progressive coffee house and black box theater that for a time hosted the meetings of Occupy Detroit. This allowed Gilbert’s private security police to mount spy cameras. Cafe owner Chris Jasczak was outraged. No felony charges there!

The mural was painted over in short order, and there clearly was no “destruction” of the Youthville building. The motive was not “malicious,” but filled with compassion for slain children. Yet, in addition to facing wildly out-of-proportion felony charges, these two local artists have been billed as common vandals and instigators of anonymous insurrection by the local news. This case is obviously politically and racially motivated, emphatically so in light of national outrage over the epidemic of racist police brutality.

Seeing that paramount hypocrisy, one massively twisted limb on a rotten tree, Detroit activists are coming to court for the two youths. “Detroit FIST (Fight Imperialism, Stand Together) is in full support of all exploited and oppressed youth whose necks are pressed by the boot of the law,” said Tom Michalak. “As the authorities and their corporate masters continue to strike blows against the people, they are further creating the conditions in which a rebellion grows. We oppose any and all forms of oppression, and in every instance are on the side of the oppressed in the struggle toward liberation. We demand the charges against Taylor and Marcellus be dropped.”