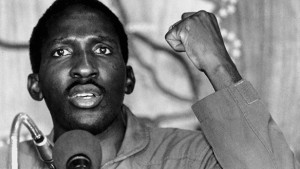 Captain Thomas Sankara, martyred Burkinabe revolutionary Pan-Africanist and Marxist leader, was assassinated in a coup on Oct. 15, 1987. Sankara, president of  Burkina Faso from 1983 to 1987, was only 37 years old.

Elections will be held later this year in Burkina Faso, a landlocked country of 17 million people in West Africa. It remains to be seen how well the parties committed to Sankara’s ideals fare in the process. Sankara’s views on self-reliance and anti-imperialism are essential during this period of escalating French and U.S. military intervention in Africa.

Sankara came to power during a critical period in the transition to a new phase of imperialist exploitation and oppression of emerging African states. The role of the International Monetary Fund, the World Bank and other global financial institutions was generating tremendous social restructuring and consequent political debate and struggle.

Born in 1949, Sankara grew up during the turbulent 1950s and 1960s when independence struggles swept many African states. He joined the Upper Volta military at a young age and was stationed in Madagascar where he witnessed a popular left-leaning uprising that toppled a neocolonialist regime in 1970.

During the 1970s, Sankara rose through the military ranks and was made an administrator of a training program for soldiers in the city of Po. In 1972, he went to France for further military training, and while there, he was exposed to Marxist ideas advocated by active leftist organizations.

By the 1980s, unrest had reached a boiling point in Upper Volta when trade unions and students engaged in strikes and mass rebellions. Several military coups took place, and Sankara’s uncompromising positions landed him in prison twice.

Left-wing elements in the military, backed by the popular will of the masses, liberated Sankara and made him leader of the National Council of the Revolution on Aug. 4, 1983. Although initiated by junior army officers, the change of power drew broad support from among the working class, youth and peasantry.

After coming to power, Sankara led a movement to rename the former French colony labelled Upper Volta to Burkina Faso, “land of the upright people.” The government’s program called for creation of import-substitution industries to curtail reliance on essential and luxury goods from capitalist countries; mobilization of youth and women to fight neocolonialism; and cancellation of the debt owed to Western imperialist financial institutions.

A March 5 Guardian article said that Sankara’s government “launched nationalization, land redistribution and grand social programs in one of the world’s poorest countries. During his four-year rule, school attendance leaped from 6 percent to 22 percent, some 2.5 million children were vaccinated and thousands of health centers opened. Housing, road and railway building projects got under way and 10 million trees were planted.”

The article continues, “Sankara declared war on corruption and embraced personal austerity, paying himself a salary of $450 a month, slashing the wages of his top officials and forbidding the use of chauffeur-driven Mercedes and first class airline tickets by his ministers and senior civil servants. He refused to have his picture displayed in public buildings, still a rare thing in the Africa of 2015, and was staunchly opposed to foreign aid, declaring: ‘He who feeds you, controls you.’”

After a four-year experiment in social revolution, Sankara was overthrown in a military coup led by Blaise Compaoré, his government’s deputy. After Compaoré seized power, the government moved rapidly toward the West, honoring international debts and abolishing Sankara’s anti-imperialist and Pan-Africanist foreign policy.

Compaoré emerged as the head of state from a meeting where Sankara was assassinated on Oct. 15, 1987. He remained in power until a mass uprising in October 2014 toppled his pro-Paris and Washington-allied regime. Compaoré fled to neighboring Ivory Coast.

Burkina Faso’s courts have recently paved the way for the proper identification of Sankara’s remains. Mariam Sankara, the martyred leader’s widow, is demanding a broader inquiry into his assassination. An inquiry would have to examine the roles of French imperialism and the Ivory Coast’s neocolonial regime in the assassination and coup.

Sankara was buried without an official ceremony or an explanation of the circumstances surrounding his death. However, Compaoré has stated that he had no information on what happened to Sankara. However, he was in the meeting where the struggle erupted over the government’s future. Moreover, it was Compaoré who emerged as president after Sankara’s murder.

Sankara’s policies radically countered the French neocolonial system so prevalent then and now in West Africa. During the 1980s, Ivory Coast was led by President Felix Houphouet-Boigny, a proponent of the postcolonial system of economic and political integration with Paris. Tensions between Abidjan and Ouagadougou were then at an all-time high.

It continues, “On Oct. 15, during a staff meeting, a gang of armed soldiers, either led or ordered by Blaise Compaoré, Sankara’s closest friend and most trusted comrade throughout the revolution, assassinated him. His body was dismembered, buried in a makeshift grave and any mention of him was erased from public view.” (Facebook, Oct. 31, 2014)

During the uprising that toppled Compaoré last October, hundreds of thousands of people took to the streets, demanding Compaoré’s ouster.  Many demonstrators were youth and workers who wore T-shirts and held banners displaying Sankara’s image. He is not forgotten.