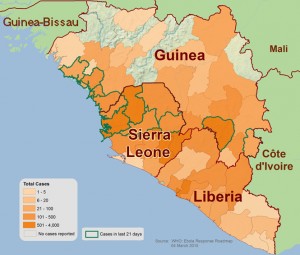 African leaders, health care professionals, international humanitarian organizations and others have praised the work battling the latest and most deadly outbreak of Ebola.

In Sierra Leone, Guinea and Liberia, the epicenters of the latest outbreak of the deadly pandemic, a dramatic decrease in the number of cases had been reported. The World Health Organization and the U.S. Centers for Disease Control and Prevention estimate that some 9,500 people have died of the 20,000 infected over the last year.

Nonetheless, even as borders reopen throughout West Africa and life returns to some form of normalcy, experts and leaders warn that vigilance is still required. An increase in new cases in Sierra Leone over the last several weeks in February has once again prompted concern.

According to WHO’s Feb. 25 Situation Report, the number of cases in Sierra Leone from December to the end of January were constant, with transmission widespread. In Guinea cases continue to arise from unknown chains of transmission. In Liberia, transmission continues but at very low levels, with only one new case reported in the week up to Feb. 22.

The new outbreak of cases in Sierra Leone is of unknown origin. It is suspected that the virus is being transmitted by workers in the fishing industry who have traveled inland to the capital of Freetown.

There were 14 confirmed new cases in Freetown the week ending Feb. 22, with additional infections discovered from what is described as unknown chains of transmission in the capital and other locations. So serious is the current threat that Vice President Samuel Sam-Sumana placed himself in quarantine after one of his security guards died from Ebola on Feb. 24.

Sam-Sumana’s office released a statement on March 1: “This virus has affected thousands of our people and has nearly brought our country to its knees. We all have a collective responsibility to break the chains of transmission by isolating the sick and reporting all known contacts, by not touching the dead. … We cannot be complacent. We must work together as a nation to end Ebola now.”

At the same time transmissions continue at very low levels in Liberia, with only one new confirmed case reported the week ending Feb. 22. Liberia, which has had the highest number of deaths, succeeded in bringing the number of confirmed cases to almost zero, while reopening schools as well as its borders with contiguous states.

Liberia has been a major partner with the Pentagon through the U.S. Africa Command. Thousands of Pentagon troops were deployed to the country at the height of the outbreak; many have now been withdrawn.

Ebola vaccine trials are underway in Liberia, where some 27,000 people may participate in a study to test the effectiveness of an experimental drug.

Although several Ebola outbreaks have been reported in Africa since 1976, originating in the Democratic Republic of Congo, then known as Zaire, the 2014-15 pandemic has been the most virulent, widespread and long lasting.

President Johnson-Sirleaf has discussed with U.S. officials the need to invest in medical, communications and educational infrastructure in Liberia. The West African state, which was founded by Africans who had been enslaved in the U.S. during the early decades of the 19th century, has been largely under the control of Washington for nearly a century through control of its rubber and mineral production.

The legacy of colonialism and neocolonialism has underdeveloped Africa, while European and North American states have grown wealthy as a result of the exploitation of agricultural commodities, mineral resources and labor. At present the Pentagon, the State Department and the Central Intelligence Agency are engaging in massive military and surveillance operations across West Africa under the guise of the so-called “war on terrorism.”

Instability is increasing throughout the region, and only a resurgence of anti-capitalist and anti-imperialist sentiment can move the people toward genuine independence and sovereignty.