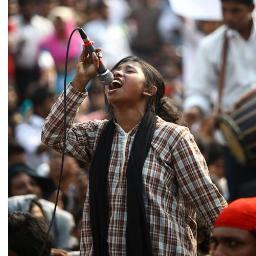 As I walked through the streets of Dhaka, Bangladesh’s capital, I became aware of so much suffering, especially for women. I saw a woman who was forced to leave her crying infant laying on a blanket alone on the sidewalk as she ran around frantically begging for money so that she could feed herself and care for her child. Another time, I saw a woman sitting in the street, crying and cradling her mother’s head as her mother lay dying.

Capitalism hurts all working women.  In the United States, sexism and patriarchy are highly prevalent, and women are faced with income inequality, violence, discrimination and harassment.  In oppressed countries that are superexploited by U.S. and other imperialist monopolies and by the local capitalists, such as in Bangladesh, life for women is a living hell. But in Bangladesh, the women are fighting back.

When I arrived in Dhaka, I witnessed this nightmare first hand. Women make up the majority of the homeless population. Women walked through the streets of Dhaka quickly and quietly with their eyes down. I later learned that this is due to the fact that women are often afraid of leaving their homes and walking around the city out of fear of being raped, which is something that happens every single day in the city of Dhaka.

The poverty and suffering that I witnessed are commonplace for women in Bangladesh, but women are not passive.

I heard Lucky Akter, general secretary of the Bangladesh Students Union, explain that “in Bangladesh, women struggle everywhere. The fight against patriarchy is in every sphere of life. Women are contributing to the economy but still they are suppressed. In this neoliberal era, women are considered as a commodity. Capitalism shows fake respect towards women.”

Speaking of history and current movements led by women, she added: “Begum Rokea (1880-1932), the legendary torchbearer of women’s education in our country, struggled against all social and religious dogmas that hinder women’s education.  In our Language movement (1952) and in the War of Independence (1971) girls from universities and colleges played a great role. Very recently, in the Movement Against War Criminals (2013) we, the girls, led from the front. All this activism through history has put impetus in women’s empowerment in our country.”

In addition, women from the Socialist Student Front of Bangladesh play a huge role in the struggle. One notable victory occurred in 1998.  A Jahangirnagar University student named Manik, who was a member of the student group of the Awami League, which was the ruling party at the time, held a celebration on campus. Believe it or not, he was celebrating the fact that he had raped his 100th victim.

A movement led by the women in the Socialist Student Front started what can only be described as a revolution in the student government of the university. After a long and difficult struggle, the movement had him expelled.  Nevertheless, not one of his 100 victims pressed charges, out of fear for their safety and of social stigma.

In Bangladesh, women make up 85 to 90 percent of the sweatshop work force. Women are working 10 and 12 hours a day, seven days a week, and are paid only between 30 and 38 dollars a month.  Everyday, they endure harassment and the threat of sexual violence, which is very common in these factories. They live in extremely cramped living quarters and struggle with illness and injuries as a result of their unsanitary and horrific working conditions.

Corporations based in the U.S. are thrilled with the massive profits they obtain through the horrific exploitation of the women of Bangladesh, and even fight to lower wages of the women who are already barely surviving as it is.  In 2013, there was a devastating factory collapse that killed over 1,000 women.

In the aftermath of this catastrophe, U.S.-based corporations such as Walmart and Gap refused to sign onto an accord that would require factories to have safety upgrades to avoid another disaster.

The U.S. government encourages and offers incentives to U.S. corporations to establish factories in Bangladesh, which they do in order to maximize profits.  The U.S. federal government even has its uniforms made in Bangladeshi sweatshops, while U.S. officials condemn poverty there out of the other side of their mouth.

Bangladesh provides a clear example of the way that capitalism and imperialism hurt women and further oppression. We must unite as the global working class to fight for socialism so that one day all women can be free.