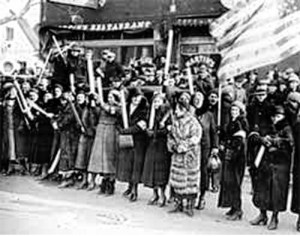 The Flint, Mich., sit-down strike achieved victory 78 years ago on Feb. 11, 1937. After a 44-day occupation of General Motors plants, the company was forced to recognize the United Auto Workers.

Critical to the strike’s success was the Women’s Emergency Brigade, formed by a striker’s spouse, Genora Johnson. ­Famous footage shows the brigade breaking plant windows with clubs when the police fired tear gas inside. This daring action kept the strikers occupying the plant from being suffocated.

This Jan. 29 the last living veteran of the brigade, Geraldine Blankenship, died. Below are excerpts from a 2007 interview conducted by this writer with Sister Blankenship:

My mother was born in Columbiaville and my father out close to Pinnebag. They met at a woolen mill in Yale. [Before they met] my mother got the girls to go on strike so they could get a five-cent raise a day. And she was only 15.

I remember [before the occupation] my dad coming home so tired that he couldn’t eat. He would just go and wash up a little, and he’d go to bed and fall asleep.

They used to have union meetings at our house before the strike — secret of course. I don’t know where the decision was made to go on strike, but it could have been in our living room.

My dad was the vice chairman of the sitdown at Fisher One. I remember my dad called home and said, “Well, we’re on strike, I’ll see you when it’s over.” We were rather scared, because we’d heard about how [the police] treat strikers. My dad had been on a picket line once and the police came in and [a striker] got whacked and it killed him.

My dad told my mother, “You know, some of these guys, their wives are threatening to leave them.” She said, “Jay Green, if you come out of that plant I will divorce you.” She was great, because she had led that little strike back when she was 15 years old, and she never forgot how important it could be to stand up to the company.

When the strike started my sister volunteered, she went up to the [union] office. She would work and she would walk out to the plant and then picket. Those were long days for her.

I was only 17 when the strike started. I helped my mother, because we had pickets [who] came up from Ohio. They stayed at our house. They actually slept in shifts. We’d get out of bed in the morning, and the pickets would come and take over our bed.

I heard about [the Emergency Brigade] of course and I signed up. They were a great bunch of gals. Yep, they were fighters. I mean, they would have done anything necessary to back up those guys. They did a lot: they cooked; they took food over to the plant. It was a lot of work and they had kids they had to take care of, too, so it was not an easy time for them either. And had it not been for them that strike would have been lost.

I feel proud of [my red beret from the brigade], and I wear it at all the union things. Not very many 17-year-old girls had opportunities to be in something that was that important.

On “White Shirt Day,” the annual observance of the sitdown victory, workers wear a white shirt to demonstrate they are just as important as “white shirts” — the bosses. Until 1977, when Genora Johnson Dollinger came with the National Organization for Women, the celebrations downplayed the role of women.

Of course I always go to White Shirt Day. Monroe [husband] and I went to the 40th anniversary. Genora got up and made a speech. But there was some controversy over it, too. There was a group from NOW up on the left hand side, right in front of the stage, and in the balcony. After that [Genora] joined NOW. She was a tireless fighter for women’s rights.

I told the head of Planned Parenthood here, “If you got anything that I can do, why, let me know.” I made me two trips to Washington for big marches, one in 1992 and the other one in [2004]. [At that one], I was afraid I couldn’t walk that far, but my niece’s son wheeled me around in a wheelchair. That’s something I believe in so strongly. No woman should have a child she doesn’t want just because some man puts one in her. No way.”

[Right up to her death at 95, Geraldine believed in justice for all people.] I wonder about a fellow; he didn’t want Blacks in the neighborhood, so he sold his house. I’d like to see him in a cardboard box. Well, I’ve always been taught not to be a racist.

[In 2012, 17,000 workers amassed at the Michigan State Capitol to oppose “Right-to-Work” for- less legislation. Then 92, Geraldine delivered greetings.]

Martha Grevatt is a 27-year UAW Chrysler worker and author of the pamphlet “In Our Hands Is Placed a Power: The Flint Sit-Down Strike.”