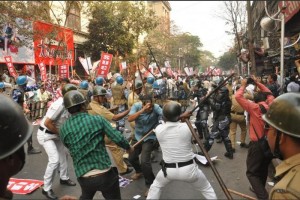 Under the normal rules of demonstrations of workers and poor people in Kolkata, India, people are allowed legal protests. Even “illegal” actions, such as peaceful civil disobedience mobilizations, are allowed in a stipulated area without police attack.

But when 30,000 people, young and old, men and women, were marching for workers and peasants’ demands on Feb. 5 in this West Bengal city, the police changed the rules at the last minute, and the streets of this densely populated city ran with the blood of the demonstrators. Making a vicious attack on them, police sent 35 people to the hospital.

The confrontation between the demonstrators mobilized by the Socialist Unity Center of India (Communist) and the rightist government has set off a series of protests and mobilizations. The SUCI(C) organization and its supporters have earned the solidarity of workers’ organizations around the world by standing strong against the attack.

According to a SUCI(C) news release, the group was marching to promote 18-point demands that included bringing down rising prices, withdrawal of the anti-peasant Land Acquisition Bill, reduction of prices of 108 essential medicines, fair prices for the peasants, banning commercialization of education, lowering price rates for power, adoption of appropriate measures to stop growing crimes against women, etc. These are all demands to improve the lives of the poor in the West Bengal state.

The release reported: “The 30,000-strong rally began its journey from College Square in central Kolkata towards Rani Rashmoni Road in Esplanade, the heart of the city. There were the protesters, the leaders and cadres of the Party, the supporters, sympathizers, periphery and the vast masses of common people, peasants and their families from the villages, workers from the industrial belts, middle class from the towns, students, youth, men, women, children with their parents, the old with their sons, daughters, relatives and neighbours. It was a vast mass, a surging wave of people effervescent yet resolute in fighting for their cause. Common people of Kolkata, in their turn, did not remain mere bystanders; they thronged on both sides of the street.”

The police used long batons known as lathi and targeted the heads and necks of the demonstrators, apparently trying to do as much damage to the people as possible. No one was arrested, but many were injured. A SUCI(C) volunteer lost one eye, one student can’t open one eye, another student’s hand has been fractured and many more have broken limbs. Despite the relentless attack, the demonstrators fought to hold their ground and make their demands known.

SUCI(C) announced: “News of this massive rally, police atrocity, and injury of the demonstrators spread rapidly throughout the state” and “in the next two months, the Party would organize deputations, rallies, squatting, block level mass law violation, road blockades and such other forms of movement and finally there will be a higher program like encircling Governor House in Kolkata.” n