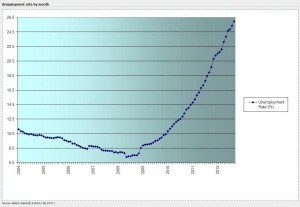 Feb. 16 — The eyes of both world finance capital and class-conscious workers and revolutionaries have been on Greece in its struggle against austerity.

The central focus of that struggle has been in Brussels this past week, with tense negotiations between Greece’s social-democratic Syriza government and representatives of the other 18 eurozone countries, their bankers and finance ministers.

Greek Finance Minister Yanis Varoufakis has been under intense pressure from the Troika — the International Monetary Fund, the European Central Bank and the European Commission — to request an extension of Greece’s bailout program, which carries with it harsh conditions of austerity. This same bailout program has brought about 26 percent unemployment and a 44 percent poverty level, while aggravating a 25 percent drop in Greece’s production over the last five years.

The Greek government has said it cannot and will not submit to this kind of extension. “Final” negotiations were supposed to take place on Feb. 16. It was expected that the negotiations would last into the night. Instead, the talks broke up after three and a half hours, when Varoufakis denounced the proposal put forward by the bankers. The two sides could not even agree on some perfunctory statement to paper over differences.

The bankers of Europe are true predatory lenders. They loaned money to the Greek government because the government owed money to the banks. So the bankers really made the loans primarily to bail themselves out. Furthermore, Greece owes 323 billion euros, equivalent to 175 percent of its gross domestic product. Everyone knows Greece cannot pay this debt. But the bankers want their money — especially the interest payments.

The debt was magnified by previous Greek governments whose dealings with Goldman Sachs and other banks were secret, fraudulent schemes to hide government debt by using credit default swaps and other financial sleight of hand. The Greek government was able to keep the borrowing off the books, thereby making its official debt appear within the limits allowed by the eurozone.

But when the financial crisis hit in 2008, the scheme fell apart. The Greek government debt turned out to be twice as large as was previously reported. The same types of financial schemes were cooked up by J.P. Morgan in Italy; other banks concocted similar fraudulent lending schemes across Europe.

This did not stop the European banks and the IMF from then forcing austerity measures on the Greek government in return for loans Greece desperately needed, partly because of bank fraud.

Now the new Greek government is in negotiations with these same financial predators, trying to get them to allow Greece to reverse the devastation wrought by the austerity measures dictated under the terms of the loans. Syriza took early bold steps by defying the Troika, putting forward a program of restoring the minimum wage, hiring 300,000 new workers, and giving food, health care and housing to the homeless and the poor. The Syriza government also announced that it would end the privatization of national assets and other measures that were conditions for receiving the so-called “bailouts.”

Syriza declared it would not apply for the last 7 billion euro due the government under the bailout because of the attached austerity conditions.

Syriza has backed down from its original demand that the debt be reduced by half and offered other concessions. It has tried to appear reasonable by pledging its loyalty to “Europe,” which means the eurozone run by the bankers. But the German bankers and their allies in the eurozone have been adamant. At best they have offered cosmetic modifications, but have not given an inch in their demands that Greece apply for a continuation of the bailout agreement, which is scheduled to terminate on Feb. 28.

Failure to renew would leave Greece in default to the bankers. No one knows how that would ripple through the financial system in Europe and beyond.

No sooner was the breakdown in negotiations announced than a new set of negotiations was scheduled; nevertheless, there may be a compromise.

But regardless of the outcome of these negotiations, there are a number of problems that will ultimately have to be resolved if the outcome is to be favorable for the masses in Greece.

One problem is that, given the relationship of forces between the Greek government and the other European imperialists, negotiations with the bankers by themselves cannot have a favorable result in the struggle against austerity.

The election of Syriza, its legal standing, its popular support and the justice of its claims are hardly sufficient to move the Troika and the bankers of Europe.

What is needed is a sharp escalation of the mass struggle in Greece in order to let the powers know that they are not dealing with government officials alone but with an aroused population.

The size of the demonstrations so far, relative to the population and relative to previous demonstrations in 2014 and before, shows insufficient mass mobilization by the revolutionary left and other forces. For example, the trade unions have had many general strikes in the past several years against austerity. If there was ever a time for a general strike to push back the bankers, the time is now. Such a strike would be greeted enthusiastically by the people — it would push the struggle forward and send a sharp message to Brussels and Berlin.

Right now the masses are very much in support of the Syriza government. They must understand  that so long as Syriza accepts the framework established by European finance capital, and is committed to abide by its fundamental regulations, there can be no break with the debt slavery the masses are suffering under. There can, at best, be a loosening of the chains of that slavery.

What Syriza is aiming at is a “new deal.” Its struggle to push back austerity must be strongly supported in the streets. But what is needed is to break the chains of debt slavery altogether. Slogans must be raised denouncing the debt, declaring refusal to pay, showing that the debt is illegitimate and is legalized robbery. Demands must be raised for cancellation of the debt or a lengthy moratorium and, of course, for dramatically raising the standard of living of the population as a whole in every way.

So long as the masses rely on negotiations to bring an end to austerity, they will be operating under illusions. It is the independent action of the workers, the students, the youth, the communities that can play the decisive role. The revolutionary left, while being alongside the masses in the anti-austerity struggle, must patiently explain the class truth to them about breaking with the European capitalist establishment.

Finally, breaking with European capital, with the euro and the European Union is easier said than done. It cannot be done without a monumental struggle. Preparations for such a struggle must be thought through now.

During the run-up to the election on Jan. 25, when Syriza won 36 percent of the vote, the right wing was passing out pictures of food lines in Venezuela and threatening voters with the prospect that if Syriza left the euro it would bring about economic disaster.

This brings up the need for the people to be prepared to defend against economic aggression, not only from the European bankers at large, but from their own capitalist class and their own bankers.

One of the things the European banks did to both Ireland and Cyprus during their debt crises was threaten to destroy their banking systems. Both countries gave in and signed structural adjustment austerity programs.

Under eurozone rules, the ECB can stop loans to private banks and central banks if they cannot ensure repayment. Right now the ECB has extended loans to hard-pressed Greek banks in the present crisis. But the ECB could turn the spigot off overnight.

If the Greek government tries to regain sovereignty over its currency and return to the drachma, and if economic aggression is launched by the euro bankers and Greek capitalists, strong defensive measures have to be in place.

For example, right now it is estimated that 2 billion euro a week are fleeing from Greek banks. Under these conditions it would be perfectly legitimate, as a defensive measure, to nationalize the banks. In fact, nationalization of the banks is in Syriza’s 40-point program. Instead of letting this demand lie dormant, it should be enforced in order to prevent the financial resources of the country from being drained by the rich.

There are many other measures that can be taken as a way of preparing to defend against economic aggression. Syriza has said it will make the notoriously tax-evading Greek corporations and the rich pay up. Untold millions of euros could immediately be reclaimed for the Greek treasury if delegations of workers, accompanied by accountants and financial experts, examined the books of the bankers, the industrialists, the shipbuilders, the tourist industry and so on to collect the taxes owed.

Securing the proper production and distribution of food, the delivery of health care and social services, etc., must be prepared if there is going to be a battle with the euro bankers and the Greek capitalists.

The most important aspect of any defensive strategy against economic sabotage would be to involve the workers in the process of enforcement. As the struggle intensifies, the organization of the workers will be crucial in dealing with the police and the military — the repressive arms of the capitalist state that will no doubt be called upon to protect capitalist interests against the intervention of the workers.

To be sure, Syriza shows no signs of being anywhere near such measures. Nor are the masses prepared for this right now. But this struggle is not going to be concluded just because negotiations end in Brussels. The hard question of austerity still has to be fought from below, no matter what happens at the top. And the question of leadership will be decisive.

There is a great deal of potential in the struggle against austerity. It could easily mushroom from being at a stalemate in negotiations to become a struggle in the streets. Should such a struggle break out in Greece, this could be a clarion call to the long-suffering workers and middle classes of Portugal, Spain, Italy and other European countries. By the same token, it would stimulate crucial international solidarity, already begun in Spain — as shown through the protest held by Podemos — and recently seen in Paris, London and Lisbon.

This is what has the euro bankers worried, even though they will never admit it. But everything must be done to make their worst nightmares come true.