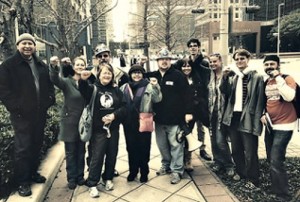 As you enter the United Steelworkers Local 13-227 union hall in Pasadena, Texas, just outside Houston, the signs and notices announce that oil workers are on strike. Entering strike central, a large room with a big table in the middle, you see and hear the low-level but constant buzz of organizing activity. Union Vice President Jeff Lewis is signing in workers who come in for their picket shift. Another union worker is on the phone reminding workers when their shift is scheduled.

Of 11 facilities involved in the national oil strike, five of them are in the Houston area, where the union represents 5,000 oil workers.

As plant gates are assigned, a few workers eat a meal of spicy boudin, a Cajun sausage that someone has prepared for the strikers. The shuttle driver comes in to find out who needs a ride to the Shell plant gate. A community activist supporting the strike brings in a $25 donation for the strike fund before he volunteers to walk a picket line.

One striker told Workers World that he has been forced to work 36 hours straight. “I was operating a control board with buttons, and after 24 hours the buttons started to blur into each other. I was so sleepy I literally couldn’t see.”

Tensions heated up this week at the Shell Deer Park refinery when officials ordered strikers off the picket line with fabricated stories of workers blocking entrances.

The union together with the community has held several protests, a major one at Shell headquarters in downtown Houston led by U.S. Reps. Gene Green and Al Green. Over 300 workers, their families and community leaders and activists surrounded the square block occupied by the major oil company, chanting, singing and carrying picket signs.

The Oil Workers Strike Solidarity Committee was formed in Houston to organize support and build community solidarity by walking the picket lines at the refineries. One young activist, Marie Brignac, grew up with a father who worked for Shell. As she walked the picket line to honor him, she recalled worrying as a child if her father, a refinery worker, would come home safely from work or be injured in an explosion.

After putting in 35 years with Shell, her father was fired for trying to enforce safety on the job.

In the Houston area, workers who are not on strike are showing solidarity by cooking food, barbecuing, getting food donated to the strikers and even baking cookies. Others are finding temporary jobs for strikers.

Texas has never had a high rate of union membership. Politicians often brag that the low rate of unionization is one of the state’s biggest assets in attracting new business. Lately, however, union membership has been slowly increasing, going from 518,000 in 2013 to 543,000 last year, according to the U.S. Bureau of Labor Statistics.

The oil industry is the richest industry in the world, but the owners’ greed and their bad faith bargaining have prevented efforts to improve serious health and safety challenges in workplaces. This endangers not only the workers but people living in proximity to facilities.

While I walked the picket line, one of the workers pointed out the irony that Shell and the other companies where workers are striking could afford to pay for extra security at each of the plant gates for 24 hours a day, yet they couldn’t pay for more workers to cut the forced overtime in their plants.

The five largest oil companies — BP, Chevron, ConocoPhillips, Exxon Mobil and Shell — made a combined total profits of $93 billion in 2013, or $177,000 per minute, according to American Progress.org. But the big five’s profits declined by 27 percent in 2014, so they’ll probably use this decline to pressure Congress to retain their $2.4-billion-per-year tax breaks, opines American Progress.

As one of the strikers said, “Yes, we do make good wages, but the profits of the oil industry are so astronomical that the refusal to cut forced overtime and consider worker safety as well as the safety of the community is criminal.”