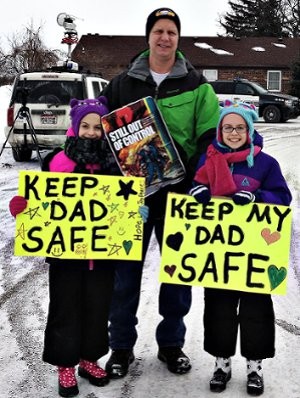 Toledo, Ohio — Since Feb. 1, thousands of oil workers across the country — members of the United Steelworkers union — have been on an unfair labor practice strike. This is a big strike involving 5,000 workers at 11 refineries in California, Texas, Kentucky, Washington state, Indiana and Ohio. Initially, Shell, Tesoro and LyondellBasell were hit with picket lines; on Feb. 7, two BP facilities were added to the strike.

“Shell refused to provide us with a counter-offer and left the bargaining table,” stated Steelworkers President Leo Gerard, explaining this was an unfair labor practice dispute. “We had no choice but to give notice of a work stoppage.” (abc7.com/news) Shell is the lead negotiator for the affected oil companies.

The Steelworkers’ master oil contract covers 30,000 oil workers at 230 refineries, pipelines, terminals and petrochemical plants. They have been represented by the USW since the union absorbed PACE (Paper, Allied-Industrial, Chemical and Energy Workers International Union) in 2005, itself a merger of several unions including the Oil, Chemical and Atomic Workers. The 65 refineries involved in the negotiations produce 64 percent of the oil in the United States.

The main issue in contention is safety on the job. At one of the struck facilities, a Tesoro refinery in Anacortes, Wash., seven workers were killed in a 2010 explosion.

USW International Vice President Gary Beevers explained, “This work stoppage is about onerous overtime; unsafe staffing levels; dangerous conditions the industry continues to ignore; the daily occurrences of fires, emissions, leaks and explosions that threaten local communities without the industry doing much about it; the industry’s refusal to make opportunities for workers in the trade crafts; the flagrant contracting out that impacts health and safety on the job; and the erosion of our workplace, where qualified and experienced union workers are replaced by contractors when they leave or retire.” Beevers leads the Steelworkers’ National Oil Bargaining Program. (abc7.com/news)

The workers are standing strong and winning support in what is the first national oil industry strike since 1980. At the BP refinery in Whiting, Ind., the union has almost 6,000 “likes” on its USW Local 7-1 Strike Support Facebook page. Pictures on the page show delegations of supporters from Lake Central Teachers Association, National Association of Letter Carriers Local 1326 and United Auto Workers Local 551 picketing with the oil workers.

Local 551 rank-and-file activist and Ford electrician Scott Houldieson has already visited the picket line several times, always with a new delegation. On one occasion his local president joined him to present the striking workers with a $900 donation.

“On Tuesday [Feb. 10] I went to the picket line before work,” Houldieson told WW. “I met four BP electricians. We started talking about the BP Deepwater Horizon oil spill that killed 11 workers and the Texas City refinery explosion that killed 15 workers and injured scores more. It became clear that this was not just a strike about wages and working conditions. This was not just an issue for BP workers, but an issue important to the surrounding communities that could be gravely impacted by a calamity at the huge refinery.”

In Toledo, Ohio, where another struck BP refinery is located, 150 members and supporters of USW Local 1-346 rallied and marched in near-zero temperatures. Speakers from the striking local and other Steelworker locals, as well as USW District Director Dave McCall, were upbeat about the strike and stressed the overriding issue of worker and community safety. Workers chanted “No contract, no peace” and “Safe refineries save lives” as they marched. Steelworkers drove over an hour from USW Local 1299 in Detroit and parts of Ohio to stand out in the bitter cold with the Toledo strikers.

Solidarity is growing around the country. In Boston, USW Local 8751 members who comprise Team Solidarity, the Voice of the United School Bus Workers, stated in a solidarity statement: “The oil workers’ strike is a frontline battle deserving the solidarity of every worker and every sector of society. Team Solidarity stands ready to assist in this heroic and important strike in any way we can.”