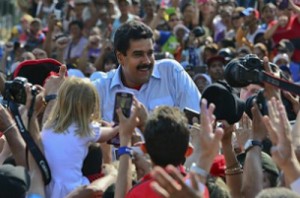 Ever since Comandante Hugo Chavez became president of Venezuela in 1998 and the Bolivarian Revolution began, there has been no time that the opposition — supported and, to a large extent, led by the United States — has stopped trying to overturn the revolutionary process. It is a story repeated many times in Latin America — so much so that there’s a joke that “the U.S. is the only country where there are no coups because there is no Yankee embassy there.”

The latest attempted coup aimed at Venezuela was revealed this past Feb.12, when Youth Day is commemorated, just a year after the start of violent street demonstrations known as guarimbas. The right-wing opposition used these street actions in an attempt to overthrow the government of President Nicolas Maduro. They killed 43 people and injured hundreds. This Feb. 12 Maduro told the people his government had dismantled another attack. He released details about recently discovered plans and the role of the U.S. government.

According to President Maduro, the coup was to unfold in three phases: The first would be the publication of the “Program of the Transitional Government” in print, followed by the second phase, an attack with a Tucano fighter plane on the president’s Miraflores Palace and more than a dozen other places, including government departments and the central station of Telesur, the Bolivarian media organization. The third phase would be the publication of a “video of a general who had confessed and been convicted of a coup last year, who would report that a military force had revolted against President Nicolas Maduro and had overthrown him.” (Telesur, Feb. 12)

Diligent work by Bolivarian government intelligence officials, combined with the loyalty of young army officers, succeeded in dismantling the planned coup. The evidence obtained, including guns, computers, etc., along with confessions of some detained officers, leave no doubt about the details of the plan, its authors and its financing. Some of those involved, including military aviation officers, are in the hands of the courts, which continue the investigation.

Involved in the coup attempt are such right-wing assembly members as Julio Borges, a deputy to the National Assembly from the right-wing party Primero Justicia; 17 active military officers who had already obtained visas from the U.S. State Department; plus retired officers such as Major General Maximiliano Hernández, who is now incarcerated; businessman Parsifal D’Sola; Maria Corina Machado, a known oppositionist who receives funding from the U.S. Agency for International Development; Leopoldo Lopez, in prison now for promoting violent guarimbas in 2014; and others.

The latter two people, together with the metropolitan mayor of Caracas, Antonio Ledezma, signed on Feb. 11 the “Call for Venezuelans to a National Agreement for the Transition,” a program aimed at reversing the gains of the Bolivarian Revolution and restoring neoliberalism to Venezuela, including the “insertion” of the country in international organizations like the International Monetary Fund.

On Feb. 14, President Maduro announced on Telesur: “We’re just about to capture the person who brought the script that the officers were to read, which a counselor of the Embassy of the United States edited.” Maduro assured the people that all those captured have admitted their role, and so far the authorities already know “how much money was paid in dollars and where the money came from.”

An article published  Feb. 14 on aporrea.org, headlined “Blackwater USA appears to own the Tucano aircraft that was to be used to bomb Caracas and overthrow Maduro,” reports that the plane “would be provided by a private U.S. security contractor that obtained the aircraft in order to train pilots.”

Beside granting visas to the coup officers, the U.S. showed its role in Venezuela with the White House statement about its “National Security Strategy” of February 2015, which leaves no doubt of the U.S. government’s position: “We are with the citizens where democracy is at risk, as in Venezuela.”

This latest attempted coup and U.S. intervention have sparked a wave of indignation and solidarity throughout the world. Governments of the countries that are members of the progressive regional organizations ALBA (Bolivanian Alliance for the Peoples of Our America), UNASUR (Union of South American Nations), CELAC (Community of Latin American and Caribbean States) and MERCOSUR (Common Market of the South), and popular movements worldwide have spoken out in support of the Venezuelan government and the Bolivarian people. Many organizations have simply sent photos showing signs that read: “Je suis Telesur.” (I am Telesur).

But it is in Venezuela itself where support for the government has been crucial. The Bolivarian youth, leftist political parties such as the United Socialist Party of Venezuela, the Communist Party of Venezuela, Patria Para Todos, the Movement of Rural Women, the Social Movement of African Descendants and others have taken to the streets and have made public statements supporting the government and opposing U.S. intervention.

On Feb. 15, Workers World spoke with Juan Contreras, the deputy to the National Assembly for the Simón Bolívar Coodination (CSB). Based in the historic January 23 neighborhood in Caracas, CSB represents the aspirations of Venezuela’s poor people.

Contreras mentioned three factors that are strangling Venezuela’s economy: low oil prices, food smuggled from Venezuela to neighboring countries, and the economic war by merchants who try to hide food in the distribution chain to cause famine among the people. Together they have aroused a great mobilization of the people. Contreras said, “The only way to curb the pretensions of the unpatriotic sectors led by this rotten bourgeoisie who follows a script provided from the North has been the mobilization.”

So far, despite U.S. support, the bourgeoisie has not triumphed thanks to two important keys of the Bolivarian process, Contreras continued. “One is readiness of the people for change, and second, the civilian-military unity that at this time has put the brakes on those who want to take power by the easy route through a coup, a violent solution and by destabilizing. Sectors of the Venezuelan bourgeoisie and the U.S. empire have both attempted these ploys.”

Contreras ended with a call for solidarity. To the people of the U.S., he requested that they “know the reality of the Venezuelan people, who are determined to build another world, another society that we have said is the Bolivarian Revolution, the Bolivarian socialism. And we are building it in peace and we want to continue building it in peace. Do not be deceived by your government nor by these large international corporations that blatantly lie about the reality of Venezuela.”

The Venezuelan Bolivarian process is a living process, and as such it is dialectical. This is a continuous struggle that needs the solidarity of all peoples.

The public declaration by the Simón Bolívar Coordination about the coup attempt ends with the following paragraph: “We call on our comrades, friends and brothers in the struggle to redouble our connections with our people mobilized on the street to confront any attempt to destabilize the government we elected to lead the Bolivarian process; in addition, we will work to expose and correct errors such as corruption, impunity and making the process bureaucratic — scourges that make the task easier for the enemies of the people.” It is signed by the Simón Bolívar Coordination: “Libertarian, Revolutionary, in Solidarity, Indigenous, Popular and Socialist.”