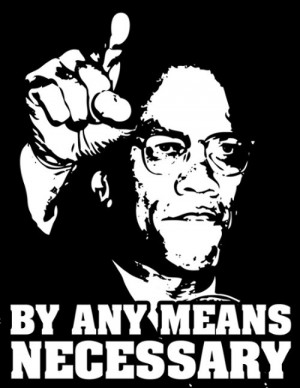 February 21 marks the 50th anniversary of the martyrdom of Malcolm X, El-Hajj Malik El-Shabazz, who was gunned down by three men at the Audubon Ballroom in Harlem, N.Y., in 1965 as he prepared to address several hundred people. The meeting was sponsored by the Organization of Afro-American Unity, founded by Malcolm X on June 28, 1964, at the same location.

At the time of his assassination, Malcolm X had been working to build two new groups: one religious, the Muslim Mosque, Inc., and the OAAU, which was secular and committed to Pan-Africanism and anti-imperialism. In April 1964, he made a hajj (pilgrimage) to Mecca, fulfilling his obligation as a devout believer in Islam.

Since his formal break with the Nation of Islam in March 1964, Malcolm X worked tirelessly to reframe the debate and ideological struggle in the African-American freedom movement of the 1960s. During his tenure with NOI, he had been a strong proponent of the program of Elijah Muhammad, the spiritual leader of the Chicago-based organization. Muhammad was from Georgia and had relocated to Detroit where he was recruited by NOI founder Master Fard Muhammad (W.D. Fard), who resided there from 1930 to 1934.

Racist violence against the Little family

Malcolm X was born Malcolm Little in Omaha, Neb., on May 19, 1925, as the fourth of eight children. His parents, Earl and Louise Little, were members of the Universal Negro Improvement Association and African Communities League (UNIA-ACL), formed by Marcus Garvey and Amy Ashwood Garvey in 1914. The Garveys moved the UNIA headquarters to the United States when they migrated here in 1916.

The Littles met at a UNIA convention in Montreal in 1919. The following year the UNIA gained international prominence through its New York City gathering, which attracted tens of thousands of people to Garvey’s message of Pan-Africanism that stressed economic empowerment and reparations for enslaved Africans.

Malcolm’s early life was impacted by racism and white mob violence. His family became targets of the Ku Klux Klan and similar terror groups as a direct result of his parents’ militancy.

In “The Autobiography of Malcolm X,” written by Alex Haley during the last two years of Malcolm’s life, he told the writer, “When my mother was pregnant with me, she told me later, ‘a party of hooded Ku Klux Klan riders galloped up to our home.’ Brandishing their shotguns and rifles, they shouted for my father to come out.” (Grove Press, 1965)

In 1926, the Little family moved to Milwaukee, Wis., relocating in 1928 to Lansing, Mich., the state capital. It was there in September 1931 that Earl Little was found dead near streetcar tracks, prompting the family to conclude that a white racist group, such as the Klan or the Black Legion, killed him.

Earl Little had been in conflict with Lansing authorities when he was ordered to vacate a home in a white neighborhood. Before the family moved, the home was torched and Little was charged with arson, which was later dropped. The family maintained that the home was burned down by racists in retaliation for Little’s defiance of white authorities.

The impact of Earl Little’s death, which was classified as a suicide, therefore preventing the family from collecting insurance benefits, devastated the family. Louise Little’s personal struggle to earn a living during the Great Depression years and constant harassment by state welfare officials, resulted in her deteriorating mental health and placement in a psychiatric institution.

Malcolm and most of his brothers and sisters were sent away to live in youth homes and foster care settings. Although he was an outstanding student, the racist atmosphere of the time resulted in his dropping out of school after the eighth grade and moving to Boston to live with an older half-sister, Ella Collins.

During the war years, Malcolm worked at menial jobs in Boston and engaged in petty criminal activities to survive. He was arrested and prosecuted for burglary in 1946 and was imprisoned for six years in Massachusetts.

During his incarceration, he was transferred to Norfolk Prison Colony, a facility Malcolm described as far superior to other institutions, with less restrictions and a large library. There, he read voraciously and participated in debating teams.

Malcolm’s brothers and sisters joined NOI while he was prison, and eventually recruited him after his initial rejection of all religions. He converted to NOI in 1948 while incarcerated.

In 1952, after he was paroled and went to live with family members in Inkster, Mich., near Detroit, Malcolm became a devout follower and NOI organizer, and was appointed an assistant minister in Detroit. In 1953, he became the minister of temples in Boston and Philadelphia. The following year, he was named minister in a temple in Harlem, N.Y., where he was based after 1954.

Elijah Muhammad appointed Malcolm as NOI’s national spokesperson in 1957. Malcolm played a pivotal role in recruiting members into the organization and enhancing its national and worldwide profile. In 1959 and 1960, NOI rallies drew thousands in major cities around the U.S. A national newspaper, Muhammad Speaks, was launched in 1961 under the aegis of Malcolm X.

The organization advocated the building of an independent Black nation of people of African descent in the U.S. NOI’s program, which was published weekly on the back of Muhammad Speaks, said that this nation would be either inside or outside the U.S. and that the federal government should pay reparations to African Americans for decades, as compensation for unpaid slave labor over the centuries.

By 1963, internal problems within the NOI resulted in Malcolm’s suspension and his complete departure by March 1964. The Federal Bureau of Investigation, along with local police agencies, monitored and infiltrated the NOI, which contributed to the heightening of divisions between Malcolm X and other leaders in the organization.

Malcolm X’s contributions: then and now

With the formation of the Muslim Mosque, Inc. and the OAAU in 1964, Malcolm X pointed the way forward for the urbanized African-American working class and poor. His emphasis on the need for mass organization, broad united fronts and political education was paramount in his outlook.

After making hajj in April 1964, Malcolm visited numerous African, Middle Eastern and European states to broaden his intellectual horizon and form alliances for a renewed struggle by African Americans against the U.S. capitalist and imperialist system.

During another trip overseas from July to November 1964, Malcolm X visited the Organization of African Unity’s second summit in Cairo. He issued an eight-page memorandum, which called on newly independent African states to support the liberation movement of African Americans.

In addition, the OAAU sought to bring the plight of African Americans to the United Nations to demand sanctions against the U.S. government for its refusal to recognize the human rights of this oppressed nation. This effort drew upon the work of William Patterson, Paul Robeson and W.E.B. Du Bois of the Civil Rights Congress, which issued an appeal to the U.N. entitled “We Charge Genocide” in 1951.

Since mid-2014, there has been a resurgence of mass demonstrations and rebellions throughout the U.S. protesting the blatant and unpunished killings of African Americans by law enforcement agents. These protests have prompted the intervention of state police agencies and National Guard units in Missouri. Moreover, Pentagon-sponsored militarization of police departments around the country has been laid bare before the world.

Malcolm X remained in an organization from the time of his release from prison until the time of his assassination. He recognized that the liberation of African Americans would require a collective effort based on militancy including the right to self-defense, anti-imperialism, Pan-Africanism and eventually anti-­capitalism.

In order to move the anti-racist movement forward in the U.S., there must be consolidation and organization of the popular forces fighting police terrorism and judicial impunity. Institutional racism is an integral part of the world capitalist system. One cannot be fought without rigorous opposition to the other. This is part of Malcolm X’s enduring legacy. pan>