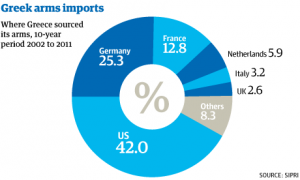 Since the 2008 capitalist downturn sparked the debt crisis, Greek working people have held huge demonstrations, general strikes and now have voted in the Syriza government to oppose the brutal austerity program imposed by U.S. and European, especially German, banks. Syriza has pledged to have half the debt written off and to roll back the austerity measures of the previous government. At this time, the European Union’s bankers refuse and are digging in their heels.

While massive unemployment and social service cuts have also hit hard in Portugal, Spain, Ireland and Italy, austerity and unemployment in Greece have brought the proportion of people living under the poverty line from 3 percent in 2010 to 44 percent today. (Public Policy Analysis Group, Athens University).

Why did this austerity hit Greece with the most devastating blow?

The Wall Street Journal of July 10, 2010, answered this question for its business audience: “Greece, with a population of just 11 million, is the largest importer of conventional weapons in Europe — and ranks fifth in the world behind China, India, the United Arab Emirates and South Korea. Its military spending is the highest in the European Union as a percentage of gross domestic product. That spending was one of the factors behind Greece’s stratospheric national debt.”

Since the 2008 global economic crisis struck, the bankers in Berlin, London and Wall Street have gone into overdrive to convince the Greek workers — and workers everywhere — that the debt crisis in Greece arose because the Greek workers were living “beyond their means.” This was a constant theme, not only of German chancellor Angela Merkel and German finance minister Wolfgang Schäuble, but also of the corporate media internationally. They claimed that the Greek government had taken out unsustainable loans in order to guarantee full health care, a minimum wage, decent pensions, libraries, schools and parks.

But the standard of living of Greek people, modest by European standards, was not the reason Greece had the highest rate of unsustainable debt in Europe.

The corporate media tell the same lie to workers in Ireland, Portugal and Spain, and to the workers in Germany whose incomes have shrunk, and in the U.S. to the working people of Detroit. This lie must be challenged politically on every front so that the people understand that their modest gains are not the source of the problem. The capitalist system and its inevitable crises are the problem.

The bankers understand very well, but are not telling the workers who the major culprit is, especially behind the Greek debt.

An article in the April 19, 2012, British newspaper the Guardian explained the impact of the years of weapons purchases:

“According to the Stockholm International Peace Research Institute … from 2002 to 2006, Greece was the world’s fourth biggest importer of conventional weapons. It is now the 10th.

“‘As a proportion of GDP, Greece spends twice as much as any other EU member on defense. … Well after the economic crisis had begun, Germany and France were trying to seal lucrative weapons deals even as they were pushing us to make deep cuts in areas like health,’ said Dimitris Papadimoulis, who now represents Syriza in the European Parliament.”

For many years, Greece was the biggest customer in Europe for German military corporations and also a major purchaser of French weapons. These are the two imperialist countries that hold the largest share of Greek debt.

The contracts for these weapons purchases and decades of maintenance and parts supplies are provided by bank loans from the countries supplying the weapons — Germany, France and the United States. The incentive for the huge unneeded purchases is a network of bribes from the military corporations, especially to the generals and top political leaders.

Angelos Philippides, a prominent Greek economist, explained: “For a long time Greece spent 7 percent of its GDP on defense when other European countries spent an average 2.2 percent. If you were to add up that compound 5 percent from 1946 to today, there would be no debt at all.

“‘If Athens had cut defense spending to levels similar to other EU states over the past decade, economists claim it would have saved around €150bn — more than its last bailout. Instead, Greece dedicates up to €7bn a year to military expenditure — down from a high of €10bn in 2009.”  (Guardian, April 19, 2012)

“‘Since the 1974 invasion of Cyprus, Greece has spent 216 billion euro on armaments,’” said Katerina Tsoukala, a Brussels-based security expert.” (Guardian) This amount is far larger than the Greek debt at the time the 2008 capitalist crisis hit. The purchases included German submarines, Mirage fighter jets from France and F-16 jets from the U.S. and 1,300 tanks.

According to SIPRI statistics, even though Greek military spending has declined since the crisis, Greece is the second-biggest defense spender (in relation to its GDP) among the 27 NATO countries, after the U.S.

Past military regime in Greece

Since the beginning of the Cold War between the imperialist West and the Soviet Union, the Greek military has played an extremely privileged and thoroughly reactionary role in maintaining capitalist rule and keeping Greece within the U.S.-commanded NATO military alliance. With full support of U.S. and British imperialists and of Greek fascists, the Greek military fought a violent civil war from 1945 to 1949 against anti-fascist workers organized by the Communist Party of Greece — the KKE.  Communist-led partisans had driven out the German occupation forces at the end of World War II.

U.S. President Harry Truman in 1947, in what became known as the Truman Doctrine, pledged unlimited military support to defeat growing workers’ movements throughout the world following the World War II surrender of Nazi-led Germany. This policy facilitated brutal coups and decades of military repression in Greece, Turkey and Iran. In Greece in 1947, the communists were defeated militarily and outlawed.

In 1967, using a NATO strategic plan, Greek colonels again seized power and set up a ruling junta, which stayed in control until 1974. The army moved in 1967 to stop the Socialist Party under George Papandreou from taking office with a center-left coalition. This brutal military junta, called the Regime of the Colonels, ruled by martial law, mass arrests, torture and disappearances. Today’s extreme right-wing fascist party, Golden Dawn, has its origins in the police units that operated with impunity during the junta’s rule.

Although ousted by a mobilized mass movement in 1974, the military and police hierarchy was untouched, except for the prosecution of a handful of coup leaders.

Greek military contracts have always been the greatest source of corruption, payoffs, kickbacks and secrecy. The bribery by major military corporations infects every level of the military. Continuing scandals surrounding military contracts have rocked past administrations. The most notorious bribery scandal involves billions paid over 12 years and billions still owed for six yet-undelivered German submarines. Former Minister of Defense Akis Tsochadzopoulos was convicted in 2013 of accepting $8 million in bribes connected to these submarines.

Given this history, the appointment of the right-wing Greek Independence Party to head the Defense Ministry in the Syriza cabinet is an especially ominous development. It certainly implies that the past onerous military loans and secret payoffs will not be challenged.

An enormous battle is ahead for the workers in Greece. Political agitation and clear demands targeting the generals enmeshed with the UE bankers who have enriched themselves in the Greek debt trap will help prepare the workers to understand who their enemy is and what they are up against.