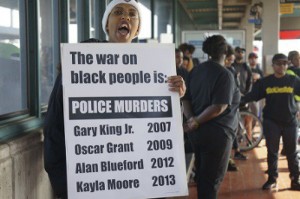 On so-called Black Friday 2014, considered the busiest shopping day of the year one day after “Thanksgiving,” 14 Black activists pulled off a daring action at the West Oakland, Calif., Bay Area Rapid Transit station to protest racist police and state violence.  These heroic activists chained themselves to train cars on both sides of the platform and to each other — shutting down the system for hours. One of the organizers, Celeste from the Blackout Collective, told the San Francisco Bay View newspaper: “Until there’s an end to the war on Black people, until there’s an end to state-sanctioned violence, we’re going to keep shutting down the system, because we don’t agree with the system.”

The “Black Friday 14” went to court on Feb. 4 to demand that the district attorney drop the call for “restitution” and dismiss the misdemeanor trespassing charge. A chanting, youthful crowd of 120 greeted them at the courthouse, singing “Which Side Are You On? (on Freedom’s Side!).” A new coalition, “Asians for Black Lives,” which had pulled off another militant action during Oakland’s stunning “96 hours” over the Martin Luther King Jr. holiday weekend, helped lead the chants, along with Latino/a and Palestinian activists. The rally turned into a teach-in.

An African-American man told of growing up in West Oakland when it was a thriving, self-sufficient Black community — until the profit-minded powers-that-be conspired to destroy it, to blot it out, and replace it with a maze of freeways and that very same West Oakland BART station.