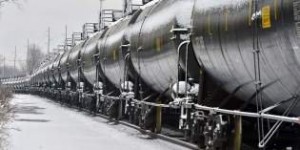 Philadelphia — For the second time in just over a year, a train carrying Bakken Shale crude oil derailed in Philadelphia, again in an area where potential harm to surrounding communities could have been catastrophic for thousands of people.

Eleven cars of a 111-car CSX train traveling from Chicago jumped the tracks around 3 a.m. on Jan. 31 in a South Philadelphia rail yard. It was near the Lincoln Financial Field sports arena and the Philadelphia Naval Yard. The area is also near Interstate 95, one of the busiest highways in the U.S., and close to waterways.

While none of the derailed cars carrying the crude oil ruptured, this second near-miss has again raised concerns.

A little over a year ago, on Martin Luther King Day, seven cars carrying Bakken Shale crude derailed over the Schuylkill River here in what was described as “a near miss from disaster.” That derailment put several major institutions at risk, including the University of Pennsylvania medical complex, Children’s Hospital and the Veterans Administration, as well as a heavily populated residential section of Philadelphia.

Both accidents were predictable. These mile-long trains carrying oil to the Philadelphia Energy Solutions refinery in South Philadelphia run 24 hours a day, seven days a week. There is very little regulation or oversight.

The trains carry crude from shale formations in North Dakota, Colorado and Texas. With over 100 cars, each carrying 30,000 gallons or more of highly volatile oil, they have been described as “ticking bombs.”

Crude oil from the North Dakota Bakken formation contains a high content of combustible gas, making it more volatile than most traditional light crude. Chemicals used in the hydraulic fracturing process are also thought to contribute to the combustible nature of shale crude.

A runaway train carrying Bakken crude oil derailed and exploded on July 6, 2013, near the village of Lac-Mégantic, Quebec, killing 47 people and demolishing the town center.

At least eight significant incidents involving crude-by-rail have taken place in the U.S. since 2013, resulting in over one million gallons of oil spilled — more than in the previous 38 years combined. (earthfix.opb.org)

Since Lac-Mégantic, fiery derailments of oil trains have occurred in the Canadian province of New Brunswick as well as in Alabama, North Dakota and Lynchburg, Va. Major derailments of crude trains not involving explosions have taken place outside Albany, N.Y., and in Greeley, Colo.

Whether this highly combustible fossil fuel is transported by rail, barge or pipeline, it will still pose a danger. More oil is released into the environment through pipeline spills while explosions caused by train derailments put major populated areas at risk. It is not a question of substituting one method of transit for another. All three methods have proven to be destructive. They all attest to the hazards created by the capitalist system, where greed for profits outweighs all other considerations.