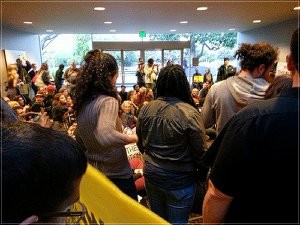 Oakland, Calif. — An overflow crowd of some 400 people packed the Bay Area Rapid Transit Board of Commissioners’ meeting here on Jan. 22, calling for dropping the criminal charges against the Black Friday 14 and BART’s demands for financial restitution.

Protesters spilled out into the large lobby, where a boisterous rally was held. Guards prevented many from entering the space.

The arrests occurred when the Black Friday 14, organized by the Blackout Collective, shut down the West Oakland BART station on Nov. 28 — so-called Black Friday. They linked themselves in a human chain from the rail cars to the benches in the station. Their purpose was to stop “business as usual” in opposition to the grand jury’s refusal to indict Police Officer Darren Wilson for killing Michael Brown in Ferguson, Mo. 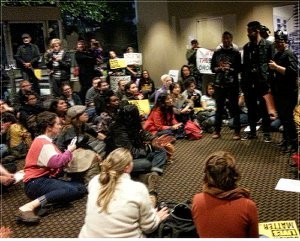 Cat Brooks, one of the 14, explained the goal of that action was an “economic boycott of the system that continues to terrorize and kill us.” (tinyurl.com/mqsa4xc)

BART has pressured District Attorney Nancy O’Malley to pursue criminal charges against the 14, who are all Black, and to demand restitution of $70,000 for the business that BART allegedly lost during the shutdown.

Importantly, there were many subsequent Bay Area protests against the grand jury decisions not to indict police officers who killed Michael Brown and Eric Garner. Those in the streets blocked freeways and intersections and closed down other BART stations. Despite the fact that the groupings at every protest were multinational and many white activists were arrested, almost all of those facing charges for the actions are Black or other people of color, showing the inherent racism of the criminal justice system.

During the Commissioners’ meeting, two different groups of Black Friday 14 supporters unfurled banners and led chants, after which they were hauled out by police. Another group stood up to reveal T-shirts with messages supporting the 14. Because so many protesters spoke there, the official agenda was tossed out. Sixty activists, including some of the 14, took the floor and dominated the Commissioners’ meeting.

Supporters also presented a petition to drop the charges, signed by more than 11,000 people. At one point, the entire room full of protesters broke out singing “Which Side Are You On?” Finally, Commissioner Rebecca Saltzman declared that she would draft a resolution to drop the charges and demands for restitution and present it to the next board meeting for approval.

The crowd declared victory and filed out of the room singing, promising to return to the board’s next meeting at 9 a.m. on Feb. 12 to make sure the resolution passes. Meanwhile, a court appearance for the 14 is scheduled on Feb. 4. Supporters are asked to come out in large numbers for both of these events.