Based on a talk at the Workers World Party Forum in New York on Jan. 23. 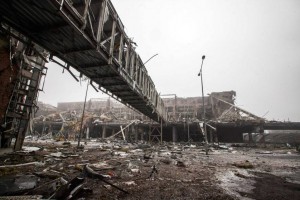 The rush-hour shelling of a trolley bus in the capital of Donetsk left 13 dead and 20 wounded on Jan. 22. At least 100 civilians were killed Jan. 21 alone in the Ukrainian terror-bombing of cities in the Donetsk and Lugansk People’s Republics of the Donbass mining region, also known as Novorossiya.

Since Ukraine announced the resumption of hostilities Jan. 18, Gorlovka has been shelled nonstop, and cluster bombs were dropped in the Lugansk city of Stakhanov.

The United Nations reported Jan. 22 that the official death toll of Ukraine’s “Anti-Terrorist Operation” is now 5,086 — although the U.N. admits this is seriously undercounted. Of these, 262 deaths occurred in the last nine days.

As horrible as this is, it’s important to know that the Novorossiyan people’s militias are fighting back strongly. Once Kiev cast aside the last pretense of a ceasefire, the militias took the long-contested Donetsk airport, moved to the outskirts of occupied Mariupol, and now are taking the fight to Ukrainian forces all along the front lines.

Donetsk Prime Minister Alexander Zakharchenko has declared their intention to expand the people’s republics’ control to the full territory of Donetsk and Lugansk, beyond the rump area they were restricted to under the Minsk Accords last September.

In recent days Zakharchenko, a former militia leader, has proven a masterful propagandist, appealing to the families of Ukrainian soldiers with a message urging them to resist the new wave of the highly unpopular military draft — the fourth in Ukraine in less than a year.

Novorossiyan forces reportedly lost 300 to 350 killed and wounded soldiers in the past week. The junta lost 1,200 killed, wounded, prisoners of war and missing in the vicinity of the Donetsk airport alone.

January 22 will be a day of remembrance in Donetsk for the victims of the trolley bus bombing and other victims of the junta. But don’t expect to see world leaders flocking to Donetsk the way they did to stand with imperialist France and Charlie Hebdo a couple of weeks ago.

In fact, the same day the trolley bus passengers were massacred in Donetsk, Lt. Gen. Ben Hodges, head of the U.S. Army in Europe, was in Kiev. There he met with wounded Ukrainian soldiers and thanked them for their service.

Hodges also met with the commander of the Ukrainian armed forces and the head of the fascist National Guard, which reports to far-right Interior Minister Arseny Avakov. He announced that U.S. troops will soon be deployed to Ukraine to train National Guard troops.

To mark Hodges’ visit, the U.S. Embassy gave the first prototype of a new armored vehicle, the Kozak, to Ukraine’s Border Guard.

The Kiev regime’s attacks on Donbass have been escalating steadily since the New Year. But we can trace this development further back to Dec. 4.

Many people will remember Dec. 4 as the night of the first big demonstrations after a grand jury decision exonerated the New York Police Department cop who choked Eric Garner to death. Here in New York the movement packed Foley Square and then marched over the Brooklyn Bridge.

What was the House of Representatives doing that night? Were they discussing measures to curb police terror against Black and Brown communities?

No. Instead the House passed a resolution condemning Russia and supporting the far-right junta in Ukraine. Former Congressperson Dennis Kucinich called it a “declaration of war.”

It passed 411 to 10, with the ten dissenters evenly split between Democrats and Republicans — showing truly bipartisan imperialist unity on this issue.

If that was the declaration of war, then what came a week later was the means to make war. On Dec. 11, both the Senate and House passed the so-called “Ukraine Freedom Support Act,” providing millions of dollars in additional military aid to Ukraine, opening the door to directly arming the junta and approving additional sanctions against Russia.

Even before President Barack Obama signed it into law on Dec. 18, airports in southeastern Ukraine were shut down to receive planeloads of U.S. weapons, vehicles and ammunition. President Peter Poroshenko then toured the country, lavishing new weaponry on military units.

In mid-January, U.S. financier and anti-communist George Soros flew to Kiev to help cook up a refinancing deal with the International Monetary Fund to save Ukraine from defaulting on its debt.

We know the U.S. was the driving force behind last February’s coup and everything unleashed since on the people of Donbass and Ukraine. But why is Washington pushing even harder now? What’s changed?

What’s changed is the economic crisis in Russia brought about by the collapse of the global oil market. U.S. and European sanctions that could be laughed off or circumvented six months ago now have real bite.

There’s never been unanimity among Russia’s capitalist ruling class or government about Donbass. Many in the Russian ruling class want to return to the neoliberal relationship with the U.S. that existed in the 1990s under Boris Yeltsin. These forces could be kept in check when there was relative prosperity. Now they are raising their heads more forcefully, demanding the abandonment of Donbass and an end to what they view as a costly global confrontation with the West.

All the capitalist factions understand that the long-term U.S. goal is to dominate and break up the Russian Federation. All are also united in regarding a revolutionary, socialist development in Donbass as even more dangerous to their interests. That is why they try to control and tamp down the struggle there, even though a strong revolutionary Novorossiya would actually be the best guarantee of Russia’s sovereignty.

During the Gorbachev period before the collapse of the Soviet Union, Workers World Party chairperson Sam Marcy was fond of using the term “full-court press.” By this he meant the U.S. was using all means of pressure — financial, military, propaganda, cultural, etc. — to exacerbate the internal contradictions in the USSR and bring about its destruction.

Today Washington is employing a similar strategy aimed at Russia. Along with the NATO buildup in Eastern Europe and more direct U.S. military intervention in Ukraine, the Ukraine Freedom Support Act includes millions of dollars earmarked to increase the influence of U.S.-backed nongovernmental organizations and political opposition loyal to imperialism, as well as to increase Russian-language propaganda broadcasts.

This development has big ramifications for Syria, Iran, China, Venezuela, the BRICS alliance (which includes Brazil, Russia, India, China and South Africa) and many other countries. But Donetsk and Lugansk are literally the front line.

Workers World Party, the International Action Center and the United National Antiwar Coalition have played a leading role in raising this important struggle in the U.S. We have disseminated information, held protests and teach-ins, brought the issue to other parts of the movement at diverse actions like Lesbian-Gay-Bi-Trans-Queer Pride and rallies for Gaza, and developed relationships with comrades and allies on the front lines.

But the fact remains that most of the working class is unaware of what is happening in Ukraine and Donbass or of the U.S. role. With some exceptions — the United National Antiwar Coalition, for example — most of the left is at best silent, at worst active cheerleaders for agents of U.S. imperialism as in Syria.

This struggle is not going away and could escalate into the dominant world issue. Now is the time to raise solidarity with Novorossiya and push it out into the broader movement, finding ways to link the struggle against war and fascism in Ukraine with the new, dynamic movement against police killings and the racist capitalist system.