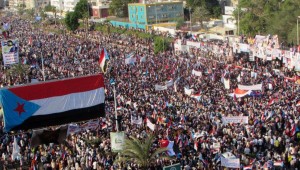 The flag of former South Yemen is seen attached to a billboard during a rally in Yemen’s southern port city of Aden October 14, 2014.

Yemen, with a population of some 24 million people, is the poorest country in the Middle East. To its north lies the brutal, oil-rich kingdom of Saudi Arabia. To its east are Oman and the rest of the wealthy Gulf kingdoms. Yemen’s own oil resources are running out, as is its meager water supply. Only 2 percent of its land can grow crops.

Millions of Yemenis have been forced to migrate to other countries, particularly to Saudi Arabia, where they are treated as slave labor. Yemen has become a transit point to Saudi Arabia and the Gulf states for the sex-slave industry.

Yemen is located between the Persian Gulf to the east and the Red Sea to the west.  It borders the narrow Bab el Mandeb strait at the entrance to the Red Sea and the gateway to the Suez Canal, one of the world’s most important shipping lanes.  So Yemen has long been targeted by Western imperialism. Until the incredibly late date of 1967, south Yemen, then called Aden, was a British colony.

After winning independence, a leftist government in South Yemen, called the People’s Democratic Republic of Yemen, instituted many reforms, particularly in women’s rights and education.  After the fall of the Soviet Union, however, South Yemen was forced to reunite with the Saudi-influenced, right-wing state to the north, under the brutal U.S.-backed dictator Ali Abdullah Saleh.

Saleh ruled the country for 31 years.  He supported the U.S. invasions of Iraq and Afghanistan.  He signed on to Washington’s “war on terror,” particularly after the U.S. Navy ship Cole was bombed while docked at Yemen’s port city of Aden in 2000.  Saleh opened the door to the dreaded U.S. assassination drones, which have killed many Yemeni civilians in dozens of attacks.

In 2011, during the “Arab Spring,” more than 3 million people demonstrated. Some of the protests were attacked and dozens of people were killed and wounded. Saleh was ousted and Abed Rabbo Mansour Hadi became president.

Yemen remains wracked with internal conflict between militia factions, however, including an Iranian-supported group called the Houthis, as well as al-Qaida of the Arabian Peninsula. President Hadi continued to allow the Pentagon free rein to use its universally hated drones in Yemen.  At least 200 U.S. soldiers, including commandos, are stationed in Yemen, as well as an unknown number of CIA operatives.

On Jan. 23, the Houthi faction forced the resignation of Hadi and his cabinet.  This has touched off large demonstrations throughout Yemen, both for and against Hadi.

Washington is trying to whip up public opinion in the U.S. to support a new military intervention in Yemen. “A dangerous situation just went from bad to worse with grave implications for our counterterrorism efforts,” said Rep. Adam Schiff (D-Calif.), a member of the House Intelligence Committee.  “Our relationship with the Yemen government has been vital in confronting [al-Qaida] and keeping the pressure on its leadership, and every effort must be made to continue that partnership.” (“Yemen chaos threatens U.S. counterterror efforts, including drone program,” Washington Post, Jan. 22)

At the same time, the Obama administration is desperately trying to “persuade” the Houthi faction to drop its opposition to U.S. drone attacks so that the Pentagon can continue its campaign. (“U.S. Teams up with Rebels Taking over Yemen,” wnd.com, Jan. 25) That could be a tough sell, since U.S. ally Saudi Arabia had recently launched air strikes against the Houthis’ strongholds.

Washington’s war in Yemen only adds to the suffering and misery of the Yemeni people. No U.S. intervention! Stop the drone strikes! Withdraw all U.S. troops from Yemen now!