Disabled-rights groups are among the most energetic advocates of solidarity with African-American victims of police murder.

Some 34 disability activist groups across the country have signed a statement protesting the police murders of Michael Brown and Eric Garner, expressing solidarity with their families and communities, and urging all to do so. (tinyurl.com/qabbdn8, Aug. 15)

This statement’s signers are both national and local groups, including organizations from Kansas, Minnesota, Montana, California, New York State and New England. They include the National Council on Independent Living and four local independent living centers; several autistic groups, including Autism Women’s Network; Little People of America; Queerability and other LGBTQ disability groups; several student groups; Help Educate to Advance the Rights of the Deaf; the Peoples With Disabilities Caucus of the Peoples Power Assembly; and Parents to Improve School Transportation.

The statement calls upon everyone to oppose “the criminalization and dehumanization of our citizens” especially of “communities viewed as ‘other’ to the American majority — young men of color, people with disabilities, LGBT individuals.” For these communities, “statements such as ‘they didn’t comply,’ they were ‘bad kids,’ ‘they were being belligerent,’ ‘they looked suspicious’ often warrant a death sentence.”

Half of people killed by police have disabilities

People with disabilities are themselves dramatically more likely to be killed by police. According to a 2013 report by the Treatment Advocacy Center and National Sheriffs’ Association, between 1980 and 2008 “at least half of the people shot and killed by police each year in this country have mental health problems.” (tinyurl.com/mjs67oa)

In many cases police were responding to requests for assistance from family or neighbors to get mental health care for the person.

People who, for example, are hearing impaired, autistic, have difficulty processing verbal information, or for other reasons of disability react atypically when approached by police are much more likely to be tasered, beaten and arrested. 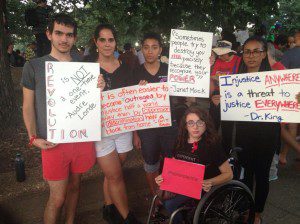 The Lead On Network statement cites such several such cases:

In capitalist society there are many forms of bigotry. There is often an intersection of racism and discrimination against people with disabilities. Disabled activists also cite the racist strangulation of Eric Garner, who told police 11 times that he couldn’t breathe. Police supporters are now blaming Garner for his own death because he was obese, asthmatic and had a heart condition.

Ethan Saylor killed for wanting to watch a movie twice 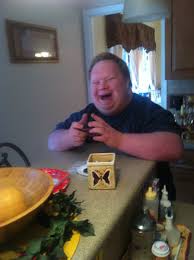 Disabled activists note the similarities between the police murder of Garner and of Ethan Saylor, a white man with Down Syndrome, asphyxiated by police in Frederick, Md.

On Jan. 12. 2013, Saylor, who was 26 years old, weighed 350 lbs, and was reported to have an IQ of 40, was at theatre with a caretaker watching the movie “Zero Dark Thirty.” He was so taken with the movie that he wanted to stay and watch it again. Saylor did not understand that he would have to purchase more tickets, and neither he nor the caretaker had the money to do so.

Police called to remove Saylor from the theatre were told by the caretaker of Saylor’s condition, and advised not to remove Saylor by force. The caretaker pleaded with the police to just “wait it out,” and informed them that Saylor could not handle being touched and would “freak out.”

The caretaker wrote in her statement to the Sheriff’s Department, “Next thing I know there are I think three or four cops holding Ethan, trying to put him in handcuffs.”

According to witnesses, three deputies fell on top of Saylor on an inclined ramp. They placed three sets of handcuffs on him, and he was laid face down for several minutes, then suddenly grew quiet and unresponsive. His last words before he died were, “Mommy! It hurt!”

Saylor’s throat cartilage had been fractured while his heart was still beating, and the death was ruled a homicide, as it could have been caused only by a direct blow or manual strangulation. Despite this ruling, just as with the police killings of Eric Garner and Michael Brown, local law enforcement called all the shots at the grand jury investigation, which cleared the deputies who killed Saylor of any wrongdoing.

It gets worse. With the police let off the hook, Saylor’s disability and weight are now being cited as having caused his death. The sheriff reportedly said that Saylor died because of a “medical emergency.” The coroner also blamed Down Syndrome and size for the death. (CNN, Dec. 4)

In the police murders of Saylor in 2013 and of Eric Garner in 2014, both victims were obese and were strangled by police who lay on top of them while applying pressure to their throats. Grand juries refused to indict police in both cases. Part of the social exoneration of the police in both cases was to blame both victims for their own deaths by citing their disabilities.

Garner: Killed, then sneered at for his disabilities

Rampant racism and ableism have been especially vicious in the high-profile case of Garner, who has been ridiculed and blamed for his own death because he was obese and had asthma and a heart condition. Representative Peter King (R-New York), speaking on CNN, thanked the grand jury for not indicting policeman Daniel Pantaleo, saying, “You had a 350-pound person who was resisting arrest. The police were trying to bring him down as quickly as possible.” King claimed, “If he had not had asthma and a heart condition and was so obese, almost definitely he would not have died.”

Pantaleo’s attorney and police union officials made the same argument.

This view was expressed more crudely on PoliceOne.com. Comments on the site about the deceased Garner include, “This guy would have died going up a flight of stairs,” “He died because of his preexisting medical conditions,” and “His family should sue Papa Johns, Dominos, Pizza Hut, Burger King, McDonalds.”

Call issued to transform the system

The disabled community has responded in its Aug. 15 statement mentioned above by holding the system as a whole responsible, and calling for everyone to unite to fight for justice for all:

“When a system that is designed to protect and serve is fueled by fear and anger, that is not merely a surmountable problem. It is a catastrophic failure of the system, and it demands transformation. Such a failure represent a lack of leadership, a corruption of institutions, and a distressing willingness to purposely and violently silence the voices of entire communities marked as different, non-compliant, and suspicious. …

“As members of a community that supports justice and inclusion, we do not have the luxury to stand by when injustice is blatantly taking place in any form, nor should we be satisfied to wait for other communities to ask for our help. Civil rights, respect and justice are due to all. We will not remain silent.” (tinyurl.com/qabbdn8)