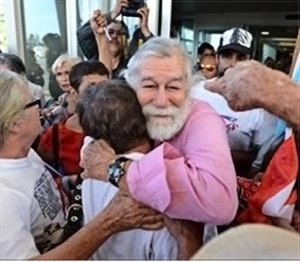 Hugs and cries of joy from a group of relatives, friends and political activists greeted Puerto Rican patriot Norberto González Claudio on Jan. 15 at the Luis Muñoz Marín Airport Terminal in San Juan, Puerto Rico. González Claudio had been arrested in the United States for his role in the robbery of $7.2 million from a Wells Fargo armored car carried out by Los Macheteros-People’s Army in Hartford, Conn., in September 1983.