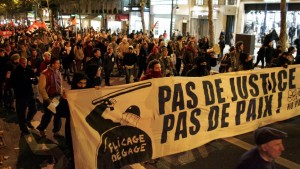 Based on remarks by Deirdre Griswold on the Charlie Hebdo attack, given to a Jan. 9 Workers World Party meeting in New York.

This should be universally recognized, taken for granted. Of course Black lives matter. But what should be self-evident has to be fought for, and at last we have the rise of a wonderful new movement to shake up the racist status quo.

Remember when Ebola looked like it might spread to the U.S. and Europe? It was front-page news. Well, it hasn’t spread here, but it continues to claim thousands of lives in West Africa. But Ebola is not in the headlines any more. The not-so-subtle message: African lives don’t matter.

When the U.S. invaded Iraq with “Shock and Awe,” when it provided planes and funding to bring down the Libyan government, when it supplies the “opposition” to kill tens of thousands in Syria and displace millions, it’s treated like a footnote. Their lives don’t matter.

When U.S. drones wipe out a wedding party in Pakistan or artillery obliterates a village in Afghanistan, it’s not news. When Al Qaeda or the Nusra Front kill people in the Middle East, the main concern expressed is how this will affect Washington’s plans for the area. Muslim lives don’t matter.

But when Al Qaeda — and we only have the French police version of this to go on — carries out a bloody attack on a newspaper in Paris, then every columnist must deplore it, every channel must give us the latest news, even if it’s only speculation. Countries and prominent individuals have to make official statements or be charged with being soft on terrorism. All the lives being snuffed out by the Western imperialists don’t matter, but these in Paris do. That’s the real message.

Needless to say, we Marxists have no ideological affinity to Al Qaeda, if that’s who the attackers were. On the other hand, the U.S. and European imperialists have no problem, in principle, with Muslim fundamentalists of the type who run some of the oil-rich principalities in the Middle East — no matter how much they oppress women or virtually imprison immigrant workers. If they protect the imperialists’ interests, then they’re OK.

How does someone living in a Muslim or Middle Eastern country feel about the furor raised over the attack on Charlie Hebdo, the French magazine? Can they not be keenly aware of this double standard in the media and politics of the so-called free, democratic world? Think about the Palestinians. They’re not for Al Qaeda, but they must be saying, “Where was this level of anger and condemnation when Gaza was being bombed every single day last summer by the Israelis? Don’t our lives matter?”

It took more than 2,000 Palestinian deaths, including more than 500 children, to arouse some sympathy in the capitalist media.

So that’s one aspect of this development. Another is the issue of free speech, which is being raised to justify the French cartoonists’ degrading images of oppressed people. We have recently seen the same thing here, in the government’s defense of the film “The Interview,” which not only is grossly insulting to the leader of the Democratic People’s Republic of Korea, but encourages murdering him by treating his fictional assassination as a laughing matter. The State Department actually worked with Sony on shaping that film.

At one time, racist, sexist and anti-LGBTQ images in this country were the norm, especially in the so-called entertainment industry. So was the practice of making “jokes” about disabled people. It has taken many, many struggles to make it clear that cartoons, jokes, ads and movies that perpetuate degrading stereotypes of oppressed people will not be tolerated. This didn’t happen because of government censorship. It happened because of countless protests and boycotts.

I don’t know firsthand about the situation in France, but I do know that far-right parties there and in other parts of Europe are openly attacking immigrants, especially from Islamic countries, in a style reminiscent of the Ku Klux Klan here. Any publication that feeds into this bias is reactionary, no matter what it calls itself.

Right-wing groups in Europe are blaming the continent’s growing economic woes on immigrants and trying to turn the anger of the workers and small shopkeepers against “foreigners.” It is these same “foreigners” who were plundered during colonialism; Europe grew wealthy on their backs. But colonial rule reduced them to poverty and underdevelopment, which has lasted until the neocolonial era today. Most of the world is still dictated to by the imperialist banks.

This is what has forced so many in Africa and Asia to leave their homes and look for work in Europe.

What the European workers need to know is that their problems come from capitalism, not from immigrants. It was the drive for super-profits in the first place that drove the developed capitalist countries to carve up the rest of the world into their colonies, at the cost of tens of millions of lives. In its latest, high-tech stage, capitalism has brought the workers on every continent into a world labor market in order to exploit the cheapest labor available, whether for production or services.

The capitalist oppression of whole nations, which has spawned countless wars over just the last few decades, most in the Middle East, has aroused national and religious antagonisms to a fever pitch. The super-rich who dictate the policies of the imperialist countries are responsible for the bloodshed in Paris just as much as they are for the millions in the oppressed countries who have died in these endless imperialist wars.