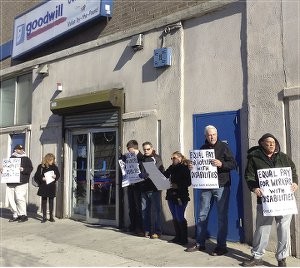 During Workers World Party’s National Conference in New York on Nov. 15-16, some of the participants took advantage of a lunch break to picket in front of a nearby building housing Goodwill Industries. The issue was how Goodwill, which cultivates the reputation of helping people with disabilities, actually exploits them quite shamefully.

Edward Yudelovich, an organizer of the protest and a co-chair of his union’s Committee on People with Disabilities, explained to the conference that the Fair Labor Standards Act, which established the minimum wage, excludes people with disabilities, as well as prisoners, immigrants and domestic workers. This has resulted in abysmally low wages for many workers at Goodwill.

He pointed out that when the Attica prisoners rose in rebellion in September 1971 against inhuman conditions, their demands included “Apply the New York State minimum wage law to all state institutions” and “Stop slave labor.”

Many of the people imprisoned in the U.S., he informed, “are people with disabilities who are regularly subjected to abuse, beatings, torture, denial of properly prescribed medication when it is medically necessary, and minimal accommodations to their disabilities.”

Yudelovich cited the case of Jerome Murdough, a homeless African-American veteran, mentally disabled, “who was baked to death at Rikers Island in February while on anti-psychotic and anti-seizure medication, which made him more vulnerable to the over-100 degrees heat in his cell. Murdough had been arrested for trespassing in the stairwell of a city housing project to escape the cold.”