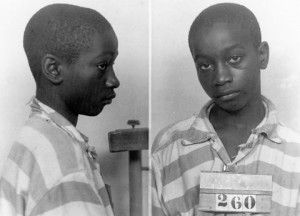 The current national uprising against police terror sweeping the U.S., following the murders of Michael Brown and Eric Garner, is helping to shed a bright light on the racist war against Black youth, rooted in slavery and Jim Crow racism. The demise of Reconstruction, a radical period when freed Black people attempted to build institutions to codify democratic rights, ushered in an era of semi-slavery that included horrific lynchings by the Ku Klux Klan and other fascistic formations.

These lynchings of Black people not only took place illegally with hangings and other unspeakable acts of savagery, but also legally through the racist courts with executions of many, including youth. Take the case of George Stinney.

At the age of 14, Stinney was the youngest person to be executed in the U.S. during the 20th century. He was arrested in March 1944 for allegedly killing two white girls in Clarendon County, S.C. In less than three months, an all-white jury had convicted and condemned him — after deliberating for only 10 minutes!

On Dec. 17, 70 years after this heinous crime was committed against Stinney, South Carolina Judge Carmen T. Mullen vacated his conviction, stating in a 28-page order that there were multiple “fundamental, constitutional violations of due process.” (New York Times, Dec. 17) Among these violations were Stinney’s arrest without a warrant and police interrogation without a lawyer.

The vacating of Stinney’s conviction comes 70 years too late because his arrest, much less execution, should have never taken place.

Fast forward to 1955, when another 14-year-old, Emmett Till, was lynched by the KKK in Money, Miss., for allegedly whistling at a white woman. When his mother, Mamie Till Mobley, showed her son’s horribly disfigured face in a casket for the whole world to see, it helped to launch the historic Montgomery Bus Boycott a few months later on Dec. 1, 1955.  The success of this boycott against racial segregation is viewed as the opening shot of the Civil Rights Movement.

If the racist sham of a trial for 14-year-old George Stinney had become national news — which it should have — would it have helped to save his precious life? Stinney certainly would have benefited from a worldwide movement of solidarity, like that which came to the defense of the imprisoned Scottsboro Brothers in Alabama.

The case of George Stinney is educating many, many people about the fact that the racist war against Black youth didn’t start with 12-year-old Tamir Rice in Cleveland; 18-year-old Ramarley Graham in New York; 18-year-old Michael Brown in Ferguson, Mo.; 18-year-old Trayvon Martin in Sanford, Fla.; or even 14-year-old Emmett Till.

As this anti-racist movement declares that “Black Lives Matter,” let us also add the name and photograph of George Stinney to that already too long and tragic list.