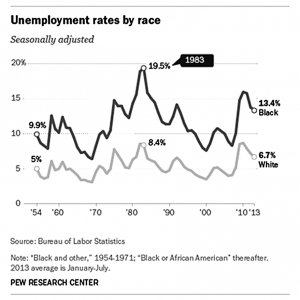 It is an outrage that Eric Garner was killed by a wolfpack of racist cops and a chokehold. It is an even greater outrage that, although the attack was caught on videotape for the whole world to see, the killers were not brought to trial.

What makes it even more horrendous is that Garner was killed for being suspected of the petty offense of selling “loosies,” which he was not even doing at the time.

Garner’s killing and the killings of Michael Brown, Tamir Rice and so many others have set off a movement that is trying to push back the racist cops, the pro-cop prosecutors and the grand jury system through mass demonstrations, shutdowns, blockages and other forms of resistance.

Unemployment and the underground economy

But why was a father of six with two grandchildren, whose son was about to start college, forced to sell loosies to support his family?

According to an Associated Press dispatch of July 21, entitled “Man in Chokehold ‘Gentle Giant,’” Eric Garner had recently worked for the New York City Parks Department on horticultural maintenance projects. He spent time on a block known as a gathering spot for day laborers and others in the underground economy.

The underground economy grows when there is less and less room for making a living in the formal capitalist economy. It is not just that there is an unemployment crisis in the U.S. The fact is that the African-American unemployment rate is more than twice that of white workers.

This difference is an ironclad measure of social and economic inequality. High unemployment among all oppressed people goes with rundown neighborhoods, inferior schools and health care, massive medical problems, and high rates of hunger and poverty, especially child poverty and infant mortality.

As the accompanying graph indicates, this disparity has been officially acknowledged for six decades, since the U.S. government began compiling statistics by race. This shows how deeply rooted are racism, national oppression, and social and economic inequality in the U.S. system of capitalist exploitation.

It is, after all, the bosses who carry out racist hiring policies as well as discrimination in pay. And it is the summits of the capitalist ruling class, the bankers and the giant corporate monopolies, along with their politicians and government officials, who for generations have lavished public funds on corporate handouts, war and intervention while inequality festers — not only for African Americans but also for Latinos/as, Asians, South Sea islanders and Indigenous peoples.

‘40 acres and a mule’ denied to freed slaves

The capitalists have shut the door on economic equality, going back to the Civil War 150 years ago. After the Northern armies defeated the slavocracy, they occupied millions of acres of confiscated land. Some 394 million acres of land had belonged to 70,000 former slave owners. (W.E.B. Du Bois, “Black Reconstruction in America,” Meridian Books, 1935) Four million freed slaves were largely landless with no means of support. Former slaves had deserted their Southern masters by the hundreds of thousands and taken up arms in the war. Black people began cultivating lands that their former masters had fled. Those freed from slavery expected land from the victorious Northerners.

From May to September 1864, General William Sherman made his famous march on Atlanta and then from November to December his “March to the Sea,” defeating the Southern armies. Thousands of freed slaves followed his army into South Carolina.

(It is important to note that Sherman later played a key role in the genocidal war against Indigenous nations on the Great Plains, destroying their food supply by killing the buffalo and expelling them from their lands to make way for the railways and settlers.)

On Jan. 12, 1865, Sherman and Secretary of War Edwin Stanton held an unprecedented meeting in a church in Savannah, Ga., with 20 leaders from the Black community and asked them what they wanted. The universal demand was for land. (Henry Louis Gates, “The Truth Behind ‘Forty Acres and a Mule,’” theroot.com)

On Jan. 16, Sherman issued his famous “Special Field Order No. 15”: It read in part that whenever three heads of families of freed slaves “shall desire to settle on land … the Inspector of Settlements and Plantations will himself … give them a license to settle such island or district and afford them such assistance to establish a peaceable agricultural settlement. The three parties named will subdivide the land, under the supervision of the inspector, among themselves, and such others as may choose to settle near them, so that each family shall have a plot of not more than forty acres of tillable ground.” (blackpast.org)

Sherman later offered army mules to the Black homesteaders to help till the land. This is the origin of the demand, which spread like wildfire, for “40 acres and a mule.” Under this order, 40,000 freed slaves were settled on about 400,000 acres.

(It should not be forgotten that much of the former plantation owners’ land was originally occupied by Native people, most of whom had been driven out.)

The freed African Americans established self-governing communities that were to be, according to Order No. 15, governed entirely by Black people themselves. The lands included the Sea Islands off the coasts of South Carolina, Georgia and Florida, down to Jacksonville and abandoned rice plantations 30 miles inland. Inspector General Rufus Saxton told the freed slaves that “the faith of the government was solemnly pledged to maintain them in possession.” (James Allen, “Black Reconstruction,” International Publishers, 1937)

The Radical wing of the Republican Party, led by Rep. Thaddeus Stevens from Pennsylvania and Sen. Charles Sumner from Massachusetts, advocated broad land redistribution and wanted to crush the slavocracy. But the bourgeoisie made an historic decision to disregard them and the promise of 40 acres and a mule and keep the former slaves in a different kind of bondage, wage slavery.

The counterrevolution began after Lincoln was assassinated. President Andrew Johnson signed a virtual universal pardon for the former plantation owners and restored confiscated land to them.

Established in March 1865, the Freedmen’s Bureau, which had custody of another 850,000 acres of land, sold most of it to Northern land speculators. Congress prescribed that on land where the military was in control, former slaves had to sign year-long labor contracts. These contracts resembled slavery. There was armed resistance when the military tried to expel the freed homesteaders from their land in the Sea Islands. The military finally had to back off.

While the Northern armies and Congress authorized male suffrage for former slaves, and in many of the former Confederate states constitutional conventions endorsed political rights for African Americans, the Northern ruling class would not concede to 40 acres and a mule — the economic foundation upon which political and social rights rested.

The capitalist class refused to fund equality, which required a massive distribution of land to the majority of landless former slaves. Millions of landless poor whites, who were told by former slave owners that they were superior to the freed slaves, could also have been granted land and thus been removed from political domination by the plantation owners.

But by 1877 the Northern armies pulled out of the South and the freed slaves were subjected to a reign of terror, enforced by the Ku Klux Klan and the infamous Black Codes. These were designed to restrict African Americans’ freedom and compel them to work for wages so low they were constantly in debt. A major feature was vagrancy law, which allowed local authorities to arrest former slaves at will and force them into involuntary labor.

Between the Northern capitalist investors and the returned Southern planters, the African-American population was submerged in a racist world of sharecropping, prison labor and the end to Black participation in government, while the capitalists and the planters piled up profits.

From Civil War to 1960s rebellions

Fast forward 100 years to the 1960s. From 1964 to 1967, there were numerous Black rebellions in urban centers. From Watts in Los Angeles to Harlem in New York to Newark, N.J., and Detroit, the rebellions were powerful. In many cases, armed former GIs from the Vietnam War battled police from windows and rooftops. There were at least 100 more rebellions after Dr. Martin Luther King Jr. was assassinated in April 1968.

Because the rebellions of the 1960s constituted a social explosion of threatening magnitude for U.S. capitalism, President Lyndon Johnson appointed the blue-ribbon Kerner Commission in 1967 to investigate the uprisings. On Feb. 29, 1968, the commission issued its famous verdict:

“Our nation is moving toward two societies, one Black, one white — separate and unequal.” The commission found the causes of the rebellions to be rooted in police brutality, racism, and economic and social hardship. In other words, in racism and national oppression.

After copious interviews in the various communities, the commission report outlined the causes, arranging them by “level of intensity”:

The report said the U.S. was in danger of moving toward “a system of apartheid.” To remedy this, the communities would have to be lifted up, primarily through the creation of jobs, job training programs and decent housing.

President Johnson rejected the report. Similar reports have been written by numerous commissions since then. The same report could be written today.

The Northern bourgeoisie faced the decision about what was to be done with millions of acres of landed wealth in 1865: Was it to go to the landless former slaves who had created the wealth of the Southern slave-owning aristocracy, or would it line the pockets of the Northern railroad barons and industrialists and the former slave owners? They chose their profit interests.

Today, to move toward equality, jobs must be created and funded. The run-down housing stock in the oppressed communities, including the prison-like projects, has to be replaced with affordable, livable housing. Schools at all levels have to be turned into welcoming environments, and all staff have to be well paid and trained. Mass incarceration must be ended, and the racist, repressive prison system has to be torn down to be replaced by community-supervised rehabilitation.

In order to root out inequality, the entire working class must have its standard of living raised. But because African Americans and other oppressed peoples have suffered from racism and national oppression for so long, their needs require even greater resources to close the gap.

It does not take much math to figure out that these measures would require hundreds of billions of dollars. That is what it would take for the millions of Eric Garners to be able to make ends meet without having to sell loosies in the underground economy.

History shows that genuine social renewal and the eradication of racism and national oppression cannot be obtained under the present-day, decadent profit system, any more than it could in 1865.