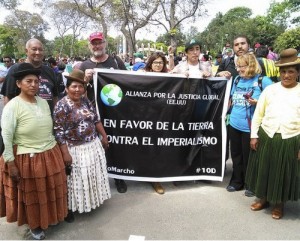 Some 15,000 people demonstrated in Lima, Peru, on Dec. 11 during the United Nations Climate Change Conference, called “COP 20.” Marchers included many from Indigenous communities as well as environmental activists from around the world, particularly from poor countries.

This was the largest climate change event in Latin America since the World People’s Conference on Climate Change and the Rights of Mother Earth, which was held in Bolivia in April 2010 and attended by up to 30,000 people. That conference was openly anti-imperialist.

This year in Lima, demonstrators marched to the U.N. conference and then across town to protest in front of the plush Hilton Hotel, where some 500 corporate leaders were having their own “World Climate Summit.”

These capitalist bigwigs had gathered to put pressure on the delegates from 195 countries attending the U.N. conference. They insist that any agreement to reduce carbon emissions and help the communities that already feel devastating effects from global warming must not challenge the imperialist profits-before-people system.

The U.S. delegation was headed by Secretary of State John Kerry. In his speech, Kerry admitted that the world is “still on a course leading to tragedy.” He said that an agreement is “not an option — an urgent necessity.”

Nevertheless, the U.S. delegation did everything it could to ensure that any deal was weak and left worldwide imperialist polluting projects largely untouched. The original 1992 U.N. framework convention had established the principle of “common but differentiated responsibilities.” This put the onus of carbon emissions reduction on developed countries, which had already put the vast bulk of long-lasting carbon dioxide gas into the atmosphere.

It is poor countries that have endured the most destructive consequences of this, whether from super-typhoons in the Philippines, land erosion in small Pacific island countries or devastating droughts, like the one now gripping Sao Paulo, Brazil, home to 20 million people.

The U.S. is seeking to water down and dismantle the differentiated responsibilities principle, thus giving imperialist corporations a free hand to continue their emissions without having to compensate poor countries that bear the brunt of climate change or to help them pay for changes to their energy infrastructure.

Many of the Indigenous people who came to the demonstration spoke out strongly against the imperialist-sponsored “Reducing Emissions from Deforestation and Forest Degradation” (REDD) program. This program pays the governments of many poor countries to force Native peoples to stop farming and fishing on their land, supposedly to protect pristine forest land. In fact, many Indigenous people are actually being evicted from their land, even though they are the victims, not the producers, of global climate change.

People from Africa and Latin America are particularly hard hit by the REDD program.

Meanwhile, giant corporate mining, logging and oil-producing operations that emit billions of tons of carbon dioxide and other pollutants every year continue unabated.

It should be noted that marchers from U.N.-sponsored organizations were forbidden from putting Kerry’s name or even “U.S.” on their signs and banners.

The Peru U.N. climate conference is meant to be a prelude to a 2015 climate conference in Paris where a final international agreement will supposedly be signed. But because of imperialist opposition to any meaningful change, the agreement reached in Lima is weak and virtually meaningless.

Dipti Bhatnagar is with Friends of the Earth International, where she is the climate justice and energy coordinator. She traveled to Lima from Mozambique, where she lives. Bhatnagar gave a reporter her take on the conference and the demonstrations:

“Lima, COP 20, is doing nothing to actually stop the climate catastrophe. But people are acting. There’s mass mobilizations. There will be an action here at 11:00 a.m. There will be a die-in, talking about justice, talking about impacted people, energy, food, the real issues that people care about. And we were talking about seeds earlier. So our slogan is: ‘They buried us, but they didn’t realize that we were seeds.’ So we grow, and the movement will continue to grow on the road to Paris and beyond.”