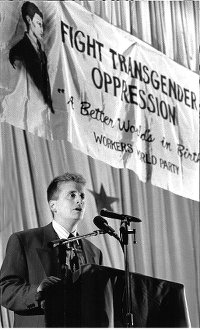 She brought ‘trans’ into labor’s vocabulary

In 1895, the year that Frederick Engels died, a 25-year-old V.I. Lenin wrote a tribute as an introduction to the first Russian language edition of Engels’ works. He opened with two lines from Russian poetry:

“What a torch of reason ceased to burn,
What a heart has ceased to beat!”

These lines, which I first came across as a communist youth, came back to me again when I had to put together some thoughts about Leslie Feinberg. One could not help but notice her mind and her intellect, whether hearing her speak for the first time or again after many times. Or even in a short and pleasant conversation.

Leslie was a patient but unyielding teacher. She taught us the word “transgender” as soon as it entered the English language. In 1994, at the founding convention of Pride at Work, I knew — thanks in part to Leslie — that it would not do to call ourselves just a lesbian and gay labor organization. Before the convention closed I made sure to make a motion to call ourselves the Lesbian, Gay, Bisexual and Transgender Labor Organization. It passed unanimously. Back then it was a vanguard position. Now it is the norm in the LGBTQ movement and Leslie deserves some credit for that.

Leslie and I shared the experience of being queer in a factory environment. We worked in some horrible sweatshops, she in Buffalo and I in Cleveland before I landed a UAW Chrysler job. I have met worker intellectuals in the factories, but too often they look down on their own class and tend to embrace capitalist individualist ideology. If anything, they embrace it more than their coworkers. Leslie was also a self-taught worker intellectual, but one who hated capitalism and fought for socialism.

As a writer and editor, she absorbed vocabulary.  I remember writing about when George Bush stole the election in Ohio in 2004. I sent the email with the word “malfeasance” in the subject headline — but I didn’t use it in the article headline because I thought the word was obscure. But when the next issue of the paper came out, sure enough, the headline referred to “electoral malfeasance in Ohio.”

Leslie loved words and words loved Leslie. But Leslie loved much more than language. She loved the species for which language is unique — she loved humanity. She loved her class, the working class, and fought for the most oppressed. She knew, even in her failing years, that three words — “Free CeCe McDonald,” chalked on a courthouse wall — would speak volumes.

A warm and loving heart has ceased to beat, and the only real tribute we can pay is to fight a little bit harder ourselves for the communist future.