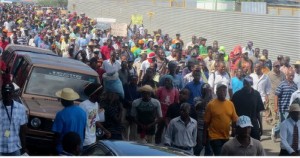 Tens of thousands of Haitians have come out into the streets repeatedly in the last month. They demand that President Michel Martelly and Prime Minister Laurent Lamothe leave office and that the 6,000 troops of the United Nation’s occupation force, called Minustah, leave Haiti.

Port-au-Prince, Léogane, Petit Goâve, Cap-Haïtien, Fort-Liberté, Ouanaminthe and Aux Cayes — the largest cities in Haiti — have all seen huge demonstrations. The people demand electricity in their houses and clean water, especially since clean water will hinder the spread of the cholera that Minustah troops introduced into Haiti. Their children need lights to study by and water to wash and drink. Haiti needs development and jobs, houses, hospitals, schools and public sanitation systems.

The popular name for this mobilization is “Operation Burkina Faso,” referring to the mass uprising that drove the French-backed dictator out of that country in October.

The U.S. government knows full well how the momentum of popular protests drove Jean-Claude Duvalier from power in 1986 and Gen. Prosper Avril from power in 1990. On Dec. 2, U.S. Ambassador to Haiti Pamela White convoked six parties that oppose the Martelly-Lamothe regime to a meeting at the headquarters of the Fusion Party of social democrats.

The most significant party invited, Fanmi Lavalas, along with a smaller party, turned down the “invitation,” and some Lavalas militants joined a protest that greeted Ambassador White.

According to a video posted on YouTube, White’s bodyguards were pushed around by the protesters, whose signs in English denounced the interference of U.S. imperialism into the internal affairs of Haiti. They did not assault White. Protesters indicated the only acceptable outcome of the meeting would have been for White to escort Martelly, Lamothe and Minustah to Miami.

U.S. Secretary of State John Kerry is scheduled to visit Haiti on Dec. 12. It is widely expected that Kerry will announce the resignation of Prime Minister Lamothe at that time. This move will allow the U.S.-backed Lamothe to run for president in 2015 without all the ugly baggage — corruption, drug dealing, repression and ostentatious waste — that Martelly would drag along.

The Haitian people have made it clear that they want neither Martelly nor Lamothe. They certainly don’t want U.S. imperialism mucking around in their internal affairs.