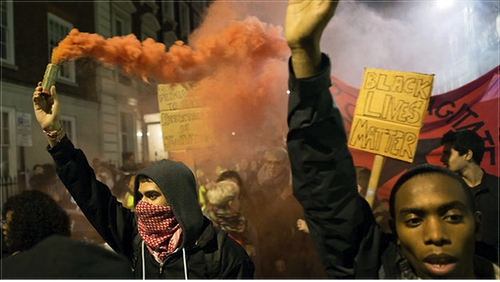 The United States is the major imperialist power in the world, so governments and media worldwide thoroughly analyze any major developments here from multiple points of view.

The struggle against racism in Ferguson, Mo., has been the subject of tens of thousands of articles and programs, in both written and broadcast media around the world, according to Google.

But besides news reports and analysis in the corporate media, there have been concrete expressions of solidarity. For example, Palestinian activists tweeted advice on how to deal with tear gas — get close to the cops and stay upwind. There were protests throughout Canada on Nov. 25 in front of U.S. consulates and the Embassy in Ottawa. More than 2,000 people attended the protest in Vancouver. (vancouver.24hrs.ca)

On Nov. 26, Stand Up To Racism and the London Black Revolutionaries organized a protest outside the U.S. Embassy in London against the grand jury’s decision, gathering a thousand people. After the rally, hundreds of anti-racist activists swarmed between buses and cars on some of the city’s busiest roads — as had been done the night before in New York.

Demonstrators held signs reading: “Black lives matter” and “Who protects black people from the police?” as they weaved their way down Oxford Street and past Parliament before finishing at Scotland Yard, which is the headquarters of England’s national police force. (www.morningstaronline.co.uk)