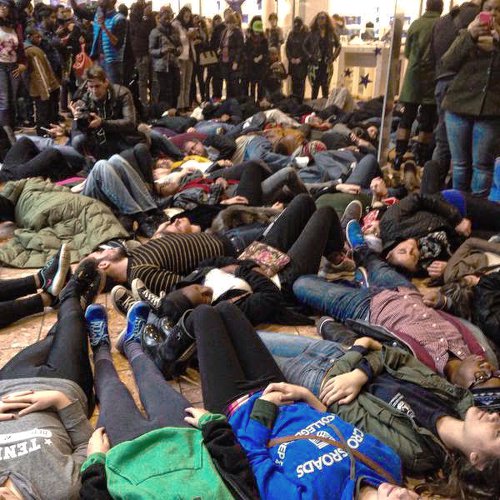 Dec. 1 — Resistance and anger over the failure of a grand jury to indict Ferguson, Mo., police officer Darren Wilson for killing Michael Brown continued over the so-called Thanksgiving holiday, when activists and community members held protests to call attention to the struggle against police brutality and police killings, as well as disrupt the profit-garnering frenzies of “Black Friday” and “Cyber Monday.”

A call for actions from movement organizers in Ferguson urged people across the country to perform walkouts on Dec. 1. Using the hashtag #HandsUpWalkOut, the national announcement states: “Our momentum is building and this is just the beginning. Tomorrow [on Dec. 1] we urge you to join thousands of others and walk out of EVERYTHING — jobs, campuses, and schools — at 1:01 p.m. EST/10:01 a.m. PST, the time Mike Brown Jr. was gunned down by police officer Darren Wilson. Congregate with others, remember [the lives of those slain by police] and honor them by working to end state violence.”

The Ferguson organizers are also honoring the heroism of civil rights pioneer Rosa Parks with these walkouts.  Parks’ refusal to sit in the back of a segregated bus in Montgomery, Ala., in 1955 sparked the yearlong Montgomery Bus Boycott.  Their call reads in part:  “Nearly 60 years ago today, Rosa Parks engaged in a simple act of civil disobedience that set the stage for a movement against anti-black racism.  Rosa Parks showed the world that meaningful actions by ordinary people can make all the difference. She took huge risks for justice.  Will you?”

On “Thanksgiving” — a day that celebrates the genocide of the Native peoples in the U.S. — protesters on Nov. 27 disrupted the most iconic representation of the holiday, the annual Macy’s Thanksgiving Day Parade in New York City. Seven activists were arrested after they attempted to break from the designated parade route and disrupt the march of the floats during the nationally televised event. Some 60 others held a sit-in in Times Square.

Eighteen-year-old Nicholas, a Harlem resident, told the New York Daily News: “We shouldn’t celebrate Thanksgiving when there’s going to be an empty seat at dinner for the family of Mike Brown. It needs to be known worldwide! So many people come to see the Thanksgiving parade from all over the world, it was important to show them what’s going on. It was the perfect place.” (Nov. 27)

New York Police Department commissioner, William Bratton, stated one day before the disruption: “We will not tolerate, under any circumstances, any effort to disrupt this parade. This is a national event, a historic event. Anybody who would seek to interrupt it would be callous, indeed, on this special day.”  (nbcnewyork.com, Nov. 26)

The next day, actions around the country slowed down the annual shopping day known as “Black Friday.” In Atlanta, protesters against police brutality joined with others at a “Fight for $15” action at an Atlanta Wal-Mart, and then held a die-in on Nov. 29 in the Atlantic Station shopping district.

Shutting down transportation and malls

Public transportation between San Francisco and the rest of the Bay Area was brought to a standstill on Black Friday, when activists chained themselves to trains on both sides of the West Oakland Bay Area Rapid Transit platform. The protests raised the failure to indict Darren Wilson as well as the case of Oscar Grant, a Black Oakland teenager who was killed by a BART police officer on New Year’s Day in 2009. The highly strategic action caused systemwide delays since the West Oakland station connects all of the BART train lines except one. Full service was not restored to the system for a full three hours, although protesters had planned to hold the protest for four hours to highlight the fact that Mike Brown’s body was left lying on the ground for four hours after he was shot.

Led by Black youth, hundreds shut down the Galleria Mall in St. Louis, a huge shopping center located just eight miles from Ferguson. Activist Bruce Gagnon reports: “As the crowd swelled it took over both floors of the mall and about half of the stores pulled down the security gates to close their shop. Many of the workers inside the stores stood behind their gates and clapped, chanted and filmed the protest. The best moment was when two women in Macy’s uniforms led the rousing chant ‘No Black Friday!’ … Many mall customers were clapping and filming the action with their cell phones. Many actually joined the crowd as we walked through the mall.” (popularresistance.org, Nov. 28) Two die-ins were held during the 90-minute action and, after leaving the Galleria, some activists continued on to protests at other stores in the area.

The national Black Friday protests were organized online by #BlackoutBlackFriday, which issued a statement that asserted, “In the wake of #Ferguson, it’s become painfully clear that people of color, and Black people in particular, are still unjustly targeted by law enforcement and the criminal justice system.” (Huffington Post, Nov. 28)