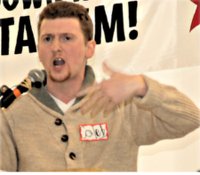 What’s the difference between a socialist and a communist? This question comes up as we spread the revolutionary message among our class. The writer Sherwood Anderson said, “The Communists are the ones who mean it.”

We do mean it. We are serious about our vision of a classless society, without the profit system’s horrors of hunger, poverty and homelessness.  We intend to rip up this society and replace it with something completely different.

Every so often, a historical moment arises where we are put to the test, and we have to prove that we are the ones who mean it. A moment like that came about 100 years ago. Then, as now, the world was ruled by a group of billionaire monopolists, who profitted from war and militarism.

Imperialist war: A test for revolutionaries

During World War I, when the billionaires waged war to determine how profits would be divided, many socialist parties and “Marxists,” labor union leaders, intellectuals and academics went along with it. They waved their flags and did not oppose the catastrophic imperialist war. Millions of workers were sent to their deaths.

Workers World Party, like the Bolsheviks, is a Communist party. Like Lenin, we will never wave the flag and cheer as workers are sent to die. We will never team up with the war makers and billionaires when they  attack a country.

Not only are we anti-war, but we are not neutral. We don’t just oppose U.S. imperialism and Israel’s Zionist settler regime, we defend the right of the Palestinians to fight against it, whatever their tactics. We support the Islamic Republic of Iran’s right to pursue peaceful nuclear energy and develop its economy. We support the right of people in East Ukraine to form self-defense militias and get support from whomever offers it. We support the right of socialist north Korea to develop nuclear weapons and  protect themselves.

We support Ferguson’s oppressed youths’ right to do what they determine is necessary to stop police terror. We offer unconditional support to forces of resistance outside the U.S.’s illegal borders.

Forging our own ‘deadly weapons’

Marxism-Leninism isn’t a utopian doctrine, with dreams about the ideal society. It is the science of revolution, and it views the world as filled with contradictions. It involves taking sides in unfolding struggles and pushing forward the forces of social progress against the old order of reaction and oppression.

The oppressive order today is imperialism. A small group of monopolists and bankers control the world economy and use violence and repression to keep their profits rolling in. To defend their profits and keep this system intact, the imperialists have drones, tanks, fighter jets and cruise missiles.

The pro-imperialist press is their deadliest weapon. When imperialists funded a neo-Nazi army, which overthrew Ukraine’s elected government, the media convinced millions of people it was about  “Russian aggression.”

In Hong Kong, a pro-imperialist, pro-Wall Street minority of rich students fantasize that China can become a Disneyland playground if only the Communist Party is overthrown. The majority of working-class Chinese people oppose them. Yet the U.S. has convinced many that this is a righteous struggle for democracy.

To combat the billion-dollar imperialist megaphones, we have our own media: Workers World newspaper and Red Flag, the Fight Imperialism, Stand Together magazine.  Also, there is more media coming from oppressed countries, which present their views.

Why doesn’t Workers World criticize certain countries? Because the press is a deadly weapon, we won’t add our voice to the imperialist chorus. We won’t echo the bosses’ case for war and destruction.

We want to build a revolutionary movement. We want to build alliances with those fighting against Wall Street: Muslims, secular nationalists, Bolivarians, anarchists, all resistance forces.  We know who the real enemy is and what our job is in the center of the empire.

Danger of a new world war

Imperialism does not bring development. It impoverishes people all over the world.

Russia is now a capitalist country, and China has strayed far from its revolutionary past, but both of them became what they are today because of socialist development, which brought them out of poverty. It is only because of revolutions in 1917 and 1949 that Russia and China are rising as huge players on the global markets.

The Wall Street imperialists, the London stock exchange criminals and the Western banking cartels are losing their grip on the world. Their only hope for getting it back is war.

If the U.S. launches a new world war, millions of youth, who go to schools filled with cops and who face lives with short-term, low-wage jobs, will be sent to fight in Wall Street’s war.

When that happens, what will we do?  It is our duty to tell the next generation that the Chinese people didn’t cripple us with student debt, Russians didn’t fill our schools with cops, and Iranians and Venezuelans didn’t destroy good-paying jobs. If World War III comes, U.S. workers must turn their guns around and make war against the war makers.

With a strong revolutionary party, this country’s youth have the potential to be the generation that saved humanity from catastrophe and destruction. This will require fearlessness, boldness and a willingness to make sacrifices.

The U.S. is a reactionary place, but this society still gave birth to great revolutionaries like Harriet Tubman, John Brown, Paul Robeson and Andy Stapp.

The next chapter in the people’s struggle is waiting to be written. It is time to move forward, to bring our class a message of resistance and to keep raising the banner of revolution.