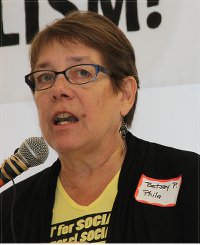 Betsey Piette, of the Philadelphia branch of Workers World Party, gave this talk at the WWP national conference, held on Nov. 15-16 in New York City.

In 2014, the discretionary budget for one Philadelphia elementary school was just $160 — roughly the cost of a family’s weekly groceries. It was meant to provide books, postage, staff training and supplies for 400 students.

At Philadelphia’s highly ranked Central High School, the second oldest continuous public school in the U.S., students started the school year with 50 to 70 of them crowded into classrooms — without enough desks or books to go around.

This is what austerity looks like as globalization and technological advances make educating the working class a low priority for U.S. corporations.

Philadelphia has closed 31 schools and laid off 4,000 teachers, librarians, counselors, nurses and support staff. The deaths of two students have been tied to a shortage of school nurses.

In most schools, teachers and parents are the ones buying paper, pencils, books, food, cleaning supplies and even toilet paper.

But voting Corbett out won’t solve anything. The source of the austerity crisis impacting the U.S.’s eighth largest school district is capitalism’s inherent drive for profits.

The introduction of Common Core State Standard tests, while creating new markets for Microsoft, won’t improve education. The devastating cuts turn schools into prisons without bars for students who spend 60 percent of their time taking tests.

Philadelphia’s state-appointed School Reform Commission, established in 2002, was designed to replace public schools with for-profit privatized charter schools. Students, parents and teachers have been fighting ever since.

The SRC was supposed to fix a two-year $115 million deficit. Instead the district’s deficit increased 32 percent annually, reaching $1.1 billion by 2012.  Philly schools pay $280 million in debt service each year — 10 times the national average.  Much of this debt stems from interest rate swaps benefiting big banks.

Racism: major cause of underfunded schools

Racism plays a major role in the underfunding of schools.  While Philadelphia has only 10 percent of Pennsylvania’s student enrollment, the city suffered 25 percent of the state’s education funding cuts. Black, Latino/a and Asian students make up more than 72 percent of the district’s enrollment. Sixty years after the Brown vs. Board of Education Supreme Court decision outlawing school segregation, segregation of public schools has surpassed 1954 levels.

For-profit education corporations, such as the Boston Consulting Group, the Walton family, the Gates Foundations, openly advocate replacing teachers with costly technology. Their privatization drive is a vicious attack on unionized teachers.

When the SRC was created, Philadelphia teachers were prohibited from striking. When the Philadelphia Federation of Teachers contract expired last year, the SRC demanded $131 million in concessions. The union refused to accept these draconian cuts.

On Oct. 6 of this year, the SRC announced it was cancelling its collective bargaining agreement with PFT.  In response to the SRC’s shocking decision, students staged a one-day strike. In the largest rally to date, thousands of workers turned out on Oct. 16, with many calling for a citywide general strike.

Over 50 union leaders signed a letter condemning the SRC’s “destruction of collective bargaining,” but stopped short of calling members out to support the teachers. Instead, they urged support for Tom Wolf, a Democratic candidate and businessman, who defeated Corbett in the Nov. 4 election. The PFT, rather than mobilizing members to take direct action, turned to the courts where they won a temporary injunction stopping the SRC from implementing contract cuts.

We don’t know what will happen next around the education struggle in Philadelphia.  We know that relying on elections or the courts to solve a crisis deeply routed in a failing capitalist economic system leads nowhere.

In 1835, Philadelphia workers staged the first general strike in U.S. history.  In 1981, a 51-day Philly teachers’ strike ended when the city’s Central Labor Council threatened a general strike. That threat provided the leverage needed to force the district to back down on demands for concessions. History shows that general strikes are effective in workers’ battles against the bosses.

Severe reduction of workers’ wages, racist housing policies, endless war spending and tax cuts for wealthy corporations — not teachers’ salaries and benefits — are to blame for funding shortfalls. Taking on the fight for public education means taking out the rotten for-profit capitalist system and bringing in a system of socialism where human needs, including education, are the priorities.