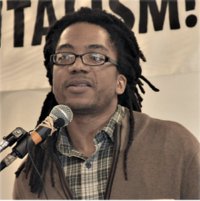 Excerpts from the talk given by Larry Hales at the 2014 Workers World Party National Conference in New York City Nov. 15-16.

I believe in comradely and revolutionary love, but also in the power of hating oppression and those that oppress. I believe in letting that hate for the oppressor burn right next to the love for the oppressed, and hopefully the tornado that forms the contradictory winds keeps you inspired.

This past year, how many victims have there been of state violence, both victims of the internally oppressed and of the oppressed nations externally? If we were to say all the names of the people killed by the violence of the U.S. imperialist state, then perhaps we would need more than the two days devoted to this conference. Someplace their names are being said. And they are just memories now.

We have long memories. We never forget.

Now the value of a young life is being weighed — of 18-year-old Michael Brown, who would have been three-quarters of the way through his first semester of college. We can all imagine which way the decision to indict Darren Wilson will go; we can infer from the so-called leaks and from numerous other cases because we don’t forget. Of course, whatever this secretive grand jury decides, it will not change the meaning of the young man’s life for his family and friends, the people of Ferguson and St. Louis County, the Black nation, oppressed people or working people in general.  It will most likely be just another indication of how this society values Black life.

But I want us, comrades, to look at the bigger picture of national oppression and the capitalist system itself, of the circumstances that created Ferguson, a once majority-white, middle- to upper-middle-class enclave, into a suburban Black ghetto.

Ferguson is in the spotlight because of the murder of Mike Brown by the pig Darren Wilson, but hundreds of Fergusons have been created from once majority Black cities, long divested from by businesses, that have felt the crush of constant cutbacks in state expenditures and of social needs being attacked.

The neoliberal model, an imperialist policy, is now a policy destroying oppressed communities, unions, social needs such as public housing, education and food programs like SNAP [Supplemental Nutritional Assistance Program] benefits. More and more the bourgeois state is becoming austere, and money is being put in the hands of the banks, financial institutions, agribusiness and huge retailers like Walmart in the form of subsidies, bond buybacks or interest payments.

Developers have moved in, bought up land, built on it, establishing minimum-income requirements, pushing the poor and oppressed out.  This comes on the heels of school closings which disproportionately affect Black children. In the latest round of school closings in Philadelphia last year, 79 percent of the children affected were Black.

Zero tolerance or quality-of-life ordinances are enacted, some neighborhood specific, like Broken Windows in Denver and in Harlem, N.Y., under the first Bratton term — something that is now citywide — or stop-and-frisk, the policy that led to the murders of Ramarley Graham and Kimani Gray.

These are the conditions, along with this specific killing of young Mike Brown, that led to the rebellion, and these conditions are all over the country, where poverty is growing at twice the rate in the suburbs as opposed to inner city areas. We must tie this to the current stage of capitalist imperialism — and the growing war against oppressed and working people in the imperialist center — with that of the oppressed around the globe.

It is why we must raise again and again: Build independent power, build the peoples’ assemblies to fight in the interests of the most oppressed behind a working people’s program whose goal is every gain we can extract on the path toward complete emancipation of oppressed and working people.

Forward ever! Power to the people, workers and assemblies of the oppressed!