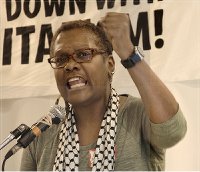 Talk given by Monica Moorehead at the 2014 National Conference of Workers World Party in New York City on Nov. 15.

The Ferguson Rebellion, ignited by the racist police lynching of Michael Brown, still strikes fear into the hearts of the 1%, the ruling capitalist class, so much so that they are preparing their storm troopers — the police and National Guard — on every level for a new phase of the rebellion, not only in Ferguson but beyond its borders, as the U.S. and the world await the dreaded outcome of the grand jury decision on whether Michael Brown’s killer, Darren Wilson, will be indicted or not.

For our class, despite the tragic death of Michael Brown, this rebellion was a political victory. It has reinforced the right of the most oppressed to rebel and to resist against an entire system by exposing to the world the horrors of police terror that protects the interests of the 1% while defying the rights of millions.

The Ferguson Rebellion upped the ante by tearing the covers off the growing militarization of the police with their tear gas, rubber bullets, tanks, drones and other terror weapons, for almost two weeks, starting on Aug. 10, when Black youth defied bogus curfews by staying in the streets.

The Ferguson Rebellion must be examined within the overall context of the global capitalist economic crisis, where the most oppressed, the most disenfranchised, the most marginalized are targeted first and foremost with racism, cutbacks and austerity.  Black and Brown youth face a relentless war of racial profiling by the police as an occupying force, the prisons, the courts, extralegal terror exhibited by the likes of George Zimmerman, demonizing by the big business media and more. All of these instruments of repression make up the state apparatus, which exists to subjugate one class by the other.  And this war is rooted within this current capitalist crisis of unemployment, underemployment, low wages, union-busting, gentrification, privatization, attacks on public education and other assaults against the workers and oppressed.  And for African Americans, this crisis is very much rooted in the legacy of slavery and Jim Crow racism.

Our party stands in unwavering solidarity with the Ferguson Rebellion, because we stand in solidarity with the workers, including oppressed nationalities from the African Diaspora, from Latin America, the Caribbean, the so-called Middle East, Asia and the Indigenous peoples, who share a common oppression, regardless of boundaries and language, in relationship to the expansion of capitalism into imperialism, which relies on the plunder and superexploitation of whole countries and peoples for its very existence.

Being nationally oppressed means being denied basic democratic rights, even under a bourgeois democracy.  So defending the right to self-determination for oppressed nations is critical for any multinational, revolutionary party to adhere to in order to strengthen class unity to move forward the class struggle.

And how does this understanding relate to the Ferguson Rebellion?  It means defending the right of the Black youth to rebel against their oppressor by any means necessary.  There is still this erroneous view that it is acceptable for the oppressor to be violent but not the oppressed. But, comrades and friends, this is a bourgeois concept.

How many times did we hear CNN, ABC, CBS and others echo how terrible it is for the “criminal” youth to be “looting and rioting” in Ferguson?  Well, isn’t it the capitalist system that loots the entire working class on a global scale every day in terms of wages, pensions and social services?  Isn’t it the police, not the masses, who riot, armed to the teeth, and impose draconian laws that provoke righteous anger?  Why do so many armed police occupy and terrorize oppressed communities if not for this purpose?

Sam Marcy, the late chairperson and founder of our party, wrote an important pamphlet after the 1992 Los Angeles Rebellion, following the acquittal of the four white police officers who beat Rodney King.  What he wrote over 24 years ago could easily apply to the Ferguson Rebellion:  “After every stage in the struggle of the workers and oppressed people, there follows an ideological struggle over what methods the masses should embrace to achieve their liberation from imperialist monopoly capital. There are always those who abjure violence while minimizing the initial use of violence by the ruling class. They denounce it in words, while in deeds they really cover it up.

“Yes indeed, they readily admit the verdict in the Rodney King beating was erroneous and unfair.  But — and here their voices grow louder — ‘The masses should not have taken to the streets and taken matters into their own hands.’ Their denunciation of the violence of the ruling class is subdued and muffled — above all it is hypocritical, a sheer formality. It’s an indecent way of seeming to take both sides of the argument when what follows is in reality a condemnation of the masses.

Comrades and friends, the Ferguson Rebellion is far from over; it is a bellwether of things to come, because as repression deepens, so will many other Ferguson uprisings.  And as a revolutionary party, it is our responsibility to assist our class, especially those in motion, to not feel abandoned or isolated, which are exactly the aims and objectives of the ruling class. Division within our class helps to keep the ruling class in power.  Their greatest fear is working-class unity, which will lead to the demise of their system.

So what can we do to assist this rebellion led by Black youth?  What strategies can we use to motivate the unions to organize these youth, just as migrant workers demanded to be organized, especially during the great May Day strike in 2006?

When a number of us were recently in Ferguson, youth told us that they want jobs, they want to be organized, but the unions are not hearing or listening to them.  This is why the slogan “Black lives matter!” is revolutionary, considering their lowly status within society.

Why can’t the unions take the millions of dollars they waste on getting some Democrat elected and instead launch a nationwide organizing drive for Black, Brown and Indigenous youth?  Think of how this act of solidarity would empower their lives and politically strengthen the unions, especially the uprising of low-wage workers?

So many of these youth in Ferguson and St. Louis are class-conscious.  They know that the capitalist system is to blame for their dismal existence; they know that police occupation is a symptom of the system and therefore, they have nothing to lose by resisting the police.