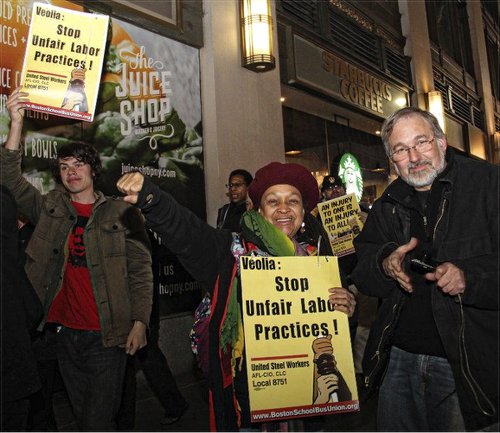 FIST youth lead the conference in singing the Internationale.

Long Island City, Queens, N.Y. — The stage banner in a school auditorium in Queens, N.Y., said it all: “Workers World Party stands in solidarity with Gaza, Ferguson and Ayotzi! Down with capitalism! Fight for socialism!” 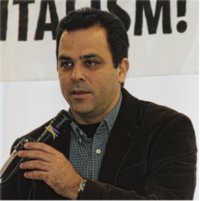 This theme resonated on Nov. 15-16 as the WWP annual national conference highlighted major struggles here and worldwide, including resistance to U.S. police and military occupation — from Occupied Gaza to Ferguson, Mo.

Ayotzi is the abbreviation for Ayotzinapa in Mexico’s Guerrero state, where 43 students disappeared recently after being kidnapped by police, setting off massive marches and rebellions against state repression.

Conference attendees were multinational, with many women and youth, Black, Brown, Asian, Arab and Indigenous, as well as lesbian, gay, bisexual, transgender, queer and people with disabilities. They came from every part of the country — west, south, north and east — to discuss and strategize around important issues such as the fight against union busting and privatization. 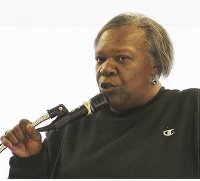 There was strong focus on support for the Boston school bus drivers’ union, under attack from the Veolia corporation; building political solidarity with the Ferguson rebellion against police terror; organizing low-wage workers and building peoples’ assemblies, especially for the Dec. 4 “Black Friday” fast food workers’ strike and the Los Angeles $15-an-hour minimum-wage campaign. Workers.org/wwp lists the many breakout groups held on Nov. 15.

The conference agenda included two protests. Before a lunchtime picket of nearby Goodwill industries on Nov. 15, Edward Yudelovich, a national organizer with the WWP Peoples with Disabilities Caucus, gave an orientation on why it was important to protest the organization’s super-low wages for workers with disabilities. 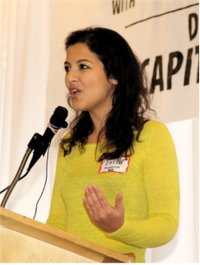 That evening a demonstration was held in front of the Veolia headquarters in Manhattan to expose this corporate giant’s attempt to break the United Steelworkers Local 8751 bus drivers’ union in Boston. Dozens of the mainly Haitian and Cape Verdean union members led the protest, which was joined by other conference delegates.

Both demonstrations reflected the struggle-oriented program of WWP.

Developing a revolutionary perspective, solidarity with most oppressed

The Saturday opening plenary session, featuring three members of the Party Secretariat — Fred Goldstein, Teresa Gutierrez and Larry Holmes — helped set the political tone for the entire conference. It was chaired by Colleen Davidson, a youth leader of Fight Imperialism, Stand Together from Baltimore. As part of her welcoming remarks, Davidson asked the many FIST members to stand and be recognized. 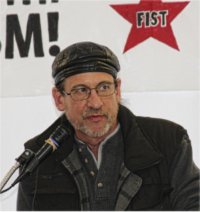 Goldstein, the author of “Low-Wage Capitalism” and “Capitalism at a Dead End,” spoke on Marxism and revolutionary socialism as the only way to overcome all capitalist inequality. Gutierrez, a co-coordinator of the May 1 Coalition for Worker and Immigrant Rights, spoke on solidarity with the struggles in Latin America, including the recent migrant caravan from New York City to the Texas/Mexican border. Holmes, WWP’s first secretary, spoke on the relationship between national oppression and the current global capitalist economic crisis. (Excerpts from their talks are on workers.org.) 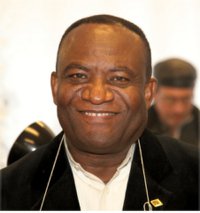 Ariel Hernandez Hernandez, first secretary of the Permanent Mission of the Republic of Cuba to the United Nations, was introduced by Cheryl LaBash, co-chair of the National Network on Cuba. Hernandez spoke on Cuba’s solidarity with West Africa around the Ebola health crisis and the ongoing campaign to free all the Cuban Five.

Team Solidarity leaders Georgia Scott, Andre Francois and Steve Gillis, along with 30 other Boston school bus drivers, received a thunderous ovation after an introduction by Sharon Black, an organizer of the Baltimore People’s Power Assembly. The three Boston militants spoke of their unwavering support for union founder Stevan Kirschbaum, who is facing criminal charges trumped up by the Boston police at the behest of Veolia, which seeks to drive communist leadership out of the union. Kirschbaum goes on trial Nov. 24 in Dorchester, Mass. 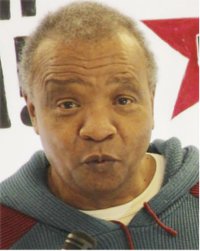 The union local may go on strike in the coming months for a decent contract and to demand the rehiring of fired union leaders Kirschbaum, Francois, Gillis and Garry Murchison, who also spoke.

LeiLani Dowell, a WW managing editor, chaired the second plenary on the low-wage worker uprising against austerity and the global capitalist crisis. On the panel were Tommy Cavanaugh, a low-wage worker in Rockford, Ill., and a leader of FIST; Betsey Piette, a WW contributing editor and writer on the cutbacks in Philadelphia; John Parker, WW West Coast editor and an organizer of the Fight for $15 minimum-wage campaign in Los Angeles; Jerry Goldberg, a fighter against the Detroit bankruptcy crisis and attorney in a lawsuit against the city of Detroit that demanded no cuts in workers’ pensions; and Steven Ceci, an activist with the We Deserve Better Baltimore Workers’ ­Assembly.

A solidarity message was read from Clarence Thomas, co-chair of the Million Worker March Movement and a rank-and-file longshore worker and unionist.

The right of oppressed youth to resist

The third plenary that day addressed “Lessons of the Ferguson Rebellion against Police Terror.” Rebeca Toledo, an organizer of the migrant solidarity caravan, chaired. Panelists were Monica Moorehead, WWP Secretariat member and editor of “Marxism, Reparations and the Black Freedom Struggle”; Lamont Lilly, an organizer with the Durham, N.C., WWP branch and contributing editor for Triangle Free Press; Larry Hales, organizer of the People’s Power Assemblies movement and a WW contributing editor; and Imani Henry, an organizer against racist police brutality and gentrification, with a major focus in Brooklyn, N.Y.

Moorehead, Lilly and Henry recently traveled to Ferguson and St. Louis for the Oct. 11-13 weekend of resistance. Pam Africa from International Concerned Family and Friends of Mumia Abu-Jamal spoke.

The theme of the fourth plenary on Nov. 16 was workers and oppressed of the world unite against imperialism. Tova Fry, an organizer with the WWP Bay Area branch and an activist against police abuse, chaired and spoke on anti-apartheid solidarity with Palestine.

Other speakers included Sara Flounders, WWP Secretariat member and co-coordinator of the International Action Center; Abayomi Azikiwe, WW contributing editor and editor of the Pan African News Wire, who has written on the Ebola crisis in West Africa; Berta Joubert-Ceci, a Puerto Rican revolutionary and editor of WW newspaper’s Mundo Obrero section; Ramiro Funez, a leader of FIST, an activist with the Honduran Libre Party and an organizer of the migrants’ caravan; Greg Butterfield, a WW contributing editor who has written on the U.S.-backed right-wing coup in Ukraine; and Caleb Maupin, a leader of FIST and an editor of its new Red Flag publication.

Deirdre Griswold, a WWP Secretariat member and WW editor, spoke on the political importance of the party’s national fund drive. Jefferson Azavedo, from the WWP Los Angeles branch, read a tribute to the late founder of the American Servicemen’s Union, Andy Stapp, from draft resister Eddie Oquendo, who went to jail rather than be drafted to go to Vietnam war.

Maggie Vascassenno, from Los Angeles, chaired a panel on solidarity with Lucy Pagoada, a founder of Honduras USA Resistencia; Charles Jenkins, president, New York Chapter of the Coalition of Black Trade Unionists; Kazem Azim, SI-Solidarity with Iran; Bernadette Ellorin, chairperson of BAYAN USA; Mick Kelly, Freedom Road Socialist Organization; Victor Toro, a founder of Chile’s Movement of the Revolutionary Left, who won the right to live in the United States after facing the threat of deportation; and Joe Lombardo, co-coordinator of the United National Antiwar Coalition.

Eva Panjwani, an organizer with the Durham WWP branch, chaired the closing plenary. Larry Holmes gave a summary. The conference adjourned after singing the communist anthem, The Internationale, in English and Spanish.

Spoken word presentations were given by Tony “Gao” Chia-Ren and Sara Benjamin.