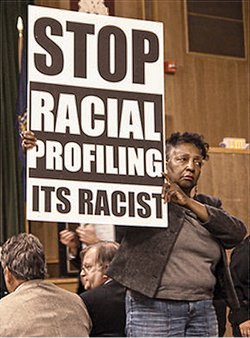 Members of the Coalition for Justice and its supporters packed a Milwaukee Fire and Police Commission meeting Nov. 6 to demand justice for Dontre Hamilton, who was shot 14 times at Red Arrow Park in Milwaukee by Christopher Manney, a Milwaukee police officer, on April 30.

When officials of the so-called “police union” attempted to speak at the commission meeting to demand Police Chief Edward Flynn reinstate Manney, they were shouted down by community activists. Manney was fired in October due to mass struggle by the Coalition for Justice and other community activists and supporters, but he is yet to be charged with any crime for killing Dontre Hamilton.

The coalition, which is led by the Hamilton family, is asking supporters to contact Milwaukee District Attorney John Chisholm and demand he charge Manney with murder. Call 414-278-4646 and/or email [email protected]

For more information and updates about the struggle for justice for Dontre Hamilton and other victims of police terror, go to facebook.com/justicefordontre and www.wibailoutpeople.org.