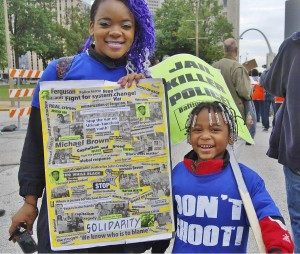 I’ve had the opportunity to travel to Los Angeles for the “$15 Minimum Wage” campaign, which includes a ballot initiative that demands a livable minimum wage of $15 an hour for the city of Los Angeles, to take effect immediately after it’s passed. The campaign also supports the struggle of low-wage workers for a union.

I support this initiative because I am a part of the working class. I have been a victim of wage theft from big corporations that profit and continue to get rich off my labor, my cheap labor. Many people, including me, find themselves scratching for funds or working a second or part-time job.

In Los Angeles, over 60 percent of the low-wage workers are Latino/a, African American and/or women. In populations like this, it is not unusual to see a widespread lack of extracurricular activities for youth and families, with no or poor health care, homelessness and a weak economy.

Since low-income families spend most of their wages directly on food, shelter and transportation, any increase in their wages would immediately boost the local and city economy by putting money back into businesses.

The ruling class spends less of their high incomes on these items not because they don’t need them but because they have so much money. There is no anxious need to spend the last of the little funds they have, like many workers who live paycheck to paycheck. So in the end, you have the majority of workers of color and women, who are the most underpaid, spending the most money consuming products. Is this fair? No.

As a Baltimore native, I know first hand the consequences of a city and government that do not safeguard their workers. Wages are low, jobs are minimum-wage, prices are increasing and education is inadequate. The gap between the rich and the poor is the biggest it has ever been.

Over the last 30-plus years, everything except wages has gone up. Child and health care, housing and especially the price tag for a college degree have skyrocketed while the wages have stayed stagnant. The minimum wage in 1963 could buy you more than the minimum wage can buy you today. This is mind-blowing.

The workers create profit through their labor but do not directly benefit from their labor. Instead, they are left with poverty wages and stress as to how they will survive.

This makes it hard for the working class to thrive. Mothers aren’t able to spend adequate time with their children because of their work schedules. As a mother of a five-year-old daughter, I know it is important to provide her with enrichment opportunities; most mothers want the same but fall short of providing them.

While supporting the Los Angeles $15 minimum wage ballot initiative I was able to work with the LA Workers Assembly, which initiated and sponsors the initiative. I spent ten days helping John Parker, the coordinator and main proponent of the ballot initiative ordinance, collect signatures, but more importantly, informing and educating people on the benefits of demanding a livable wage.

A report titled, “Effects of a Fifteen an Hour Minimum Wage in the City of LA” by the AFL-CIO, used the Fair Labor Standards Act as a criterion to determine that $15 an hour is the minimum necessary to live and survive in Los Angeles. Asking a worker to accept anything less is like asking them to “almost” get by.

Mayor Eric Garcetti made his own proposal when hit with the pressure of thousands of workers around the country and state being proactive and fighting for $15. In fact, the LA Workers Assembly was inspired by the many fast food and Walmart workers demanding a livable wage. Initiatives have passed in San Francisco; Santa Fe, N.M; Washington, D.C.; and Seattle, and Los Angeles is hoping to be next to also significantly raise the wage.

While we were getting the petitions out we also got youth registered to vote as well since people have to be registered voters in order to sign the petition. I spent a good amount of time at Los Angeles Trade and Technical College during the school’s Club Mixer Day.

I set up a booth with John to get people talking and signing for this initiative. On Oct. 23, I was a special guest in two of Dr. McClain’s sociology classes. I talked to students about the initiative and also answered questions. This was important and the most rewarding part of my work with the Assembly because it provided clarity to the students and also got the word out by word of mouth.

The majority of the student body at LATTC is Latino/a or African American. You tend to see more low-income workers attending a two-year college. Many work multiple jobs to pay tuition. Lots of questions were asked like: “What if I already make $15 an hour?” and “What about small businesses?”

I said that overall, $15 may seem like a lot, but when it comes to surviving, workers are only asking for the basics, the least possible amount needed and since we are a class of people that hold so much power in labor, $15 is fair. With any amount, inflation is possible but things have already gone up. Why not the wages?

Even inflation is not an overnight process. In section 20.02 (b) of the LA $15 Minimum Wage Ballot Initiative, the minimum wage increases annually based on that year’s inflation. This initiative protects inflation from robbing our wage increase. So in the end, we all win. The workers making poverty wages get an increase and so do the workers already making the minimum of $15 based on inflation.

Small businesses are also protected in this initiative. Section 20.01 defines what a small business is and gives that company two years to adjust their wage increase. In the end, higher wages for the working class equals a better standard of living, more money to put back into local businesses whether small or big. The fight for $15 an hour is an important one, and I am glad to have been a part of it. All power to the people!

Go to laworkersassembly.org for more information and to get involved with the campaign.