The time to openly attack and expose capitalism and advocate for its opposite, socialism, has not been this ripe since the Great Depression of the 1930s. The capitalist system is transparently rotten to the core and taking a huge toll on the lives of workers — whether employed or unemployed. The devastation in the ­African-American, Latino/a and other oppressed communities is extreme.

There are numerous studies by banks, ruling-class think tanks, universities and so on giving a partial picture of how bad things are. Even in the upper echelons of the rich and their thinkers, there is deep concern about the actual deterioration of economic and social conditions — ­because they fear eventual rebellion.

Of course, this anxiety among those who have the real information is not at all reflected in the propaganda machine of big business, which continues to talk up the economy. For example, in the last quarter the economy is supposed to have grown at 3.5 percent. Unemployment, they tell us, is going down and hiring is on the rise.

Talking up economy, playing down reality 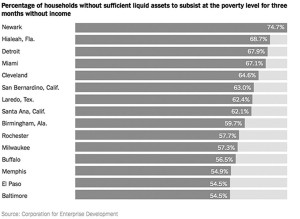 Here are some of the things the publicists of the rich do not dwell upon:

Economic inequality is at obscene levels. Mass suffering is increasing as the stock market reaches new highs — despite its ups and downs. Working-class debt of all types goes up as bank profits soar.

Trillions of dollars have been poured into the banking system to bail out the rich, even as millions of workers are under water and live from paycheck to paycheck — if they are fortunate enough to get a paycheck.

The so-called decline in the unemployment rate is because workers have dropped out of the work force by the millions. Millions more are working at low-wage jobs, are forced to work part time or are working two and three jobs just to make ends meet.

All television networks, mainstream newspapers and major politicians of the two big business parties tell us the system is basically sound and “we” are “coming back” from the capitalist crisis of 2007 to 2009. This is a smokescreen designed to conceal the fact that the “comeback” is only for the rich. The masses of people not only have not “come back” but are living with hardship on a daily basis.

Half of those in cities are ‘economically insecure’

According to a sweeping survey conducted by the Corporation for Enterprise Development, nearly half the people in major U.S. cities are living in a state of economic insecurity.

The survey asked: “If you lost your job or had a bad accident, how long would your savings last?”

The answers, according to a report in the Sept. 17 New York Times, showed: “Nearly half of all households in major cities don’t have enough money saved to cover essential expenses in an emergency.

“For many Americans, living without any cushion can lead to financial disaster. This nerve-racking financial insecurity has come to characterize life in cities across the country.

“In Newark, for example, three-quarters of the population does not have enough money to meet basic expenses for three months at the federal poverty level, about $6,000 for a family of four. The absence of assets that can be quickly converted to cash — like stocks, bank accounts or retirement accounts — is why the study calls these people ‘liquid asset poor.’ Other cities where more than half the population has nearly no financial leeway include Detroit at 68 percent, Miami at 67 percent, Cleveland at nearly 65 percent, as well as Laredo, Tex.; Birmingham, Ala.; Milwaukee; Buffalo; and Memphis.”

This survey was conducted for the banks. While it undoubtedly understates the situation, the figures show that the profit system is grinding the people down.

This survey does not include widespread rural poverty, which in many ways is even worse because support resources are scarcer, transportation costs are higher, and jobs are even harder to get. It is harder to conduct surveys where the population is dispersed.

Half can’t raise $400 in an emergency

Last year the Federal Reserve Bank did an extensive study showing that half the population could not come up with $400 to meet an emergency car repair, doctor’s bill, etc., without borrowing money or selling something. (“Report on the Economic Well-Being of U.S. Households in 2013”) The same study showed that 60 percent of the people did not have enough savings to last three months if they lost their job, were injured, etc. This condition was much worst in African-American and Latino/a communities.

As for the so-called decline in the unemployment rate, 6.3 million workers have dropped out of the work force, according to official statistics. These are among the “missing workers.” If they were counted, the unemployment rate would be 9.6 percent. Over 90 million people in the U.S. are not in the labor force.

So the population has clearly not “come back” from the economic crisis.

What these studies leave out, and what the working class needs to know above all, is that the problem is the capitalist system of wage slavery — and the solution is socialism.

For example, student debt now exceeds $1.2 trillion. People in their sixties are still paying on their debt, while the new generation has become indentured to the banks because education is so expensive and the system of student loans is harsh and unjust.

The students know this. But they also need to know that it is because of the capitalist system, in which the banks are powerful rulers who dictate legislation, fees, interest rates, penalties, etc. This is the financial core of capitalism — the so-called “free market” profit system. The privately owned, profit-making banks are so powerful that the only way to put an end to their blood sucking is to get rid of them and the profit system itself.

It is not only student debt but mortgage debt, auto debt, credit card debt, payday loan debt and many other kinds of robbery of workers’ wages that weigh down the population.

Communists must expose the system

The struggle against capitalism and for socialism requires that communists bring explicit knowledge of the system of exploitation to the workers and the movement. That is essential to the struggle for socialism. Understanding the enemy is a basic necessity for working-class leaders.

The truth is that the corporate industrialists, who are financed by the banks and merged with them, oppress and exploit workers for profit. It is a law of the system. The corporations and businesses own the economy — the factories, the hospitals, the big box stores, etc. Workers own only their ability to work and the few personal possessions they have been able to accumulate in a lifetime of labor.

And the bosses completely dominate the political system. No promises or urging by capitalist politicians to create jobs, lessen inequality, etc., will turn the bosses around. They are guided by their own profit interests.

Workers are dependent on the bosses to live. They must sell their ability to do a job of some type to a capitalist, day after day, month after month, year after year. If the bosses won’t hire them or business falls off, then the workers are out of luck. They work at the will of the owners.

The masses are suffering from the law of the maximization of profit, which drives capitalism.

They want to lower their labor costs by laying off workers and then extracting more out of the workers who remain on the job.

And they can only do this because they own the means of production, transportation and services.

Under capitalism, the working class is totally dependent on the bosses. This is why the unemployment rate won’t go down. This is why wages are permanently low. And this is why half the population, and probably more, live in a state of economic insecurity and worse.

The fightback against the capitalists and their drive to extract more and more unpaid labor from the workers must be escalated. But in the long run, the working class and the oppressed must eliminate their dependence on the capitalist class by getting rid of them and their system. Only when there is a socialist revolution and workers take over the economy in order to run it for human need and not for profit will we be able to escape the capitalist nightmare.

There is a great deal more that communists must explain. The roots of racism, sexism, bigotry and oppression of all types. The persecution and scapegoating of undocumented immigrants. The drive to militarism, intervention and war. The deceptive character of capitalist politics.

True class consciousness means understanding the enemy class and all of its treacherous features.