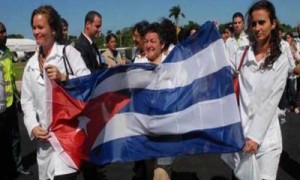 Nov. 3 — Cuban health care workers have played a leading role on the African continent for decades. The revolutionary government views its work in the fight against the Ebola Virus Disease as a manifestation of internationalism and solidarity with Africa.

In a surprising diplomatic twist, President Barack Obama’s administration noted the role of Cuban doctors and nurses in Liberia where they will work in a newly reconstructed treatment center. Samantha Power, U.S. ambassador to the United Nations, who often attacks and slanders Cuba, praised Cuba for its contribution to the fight against Ebola after her recent return from West Africa. 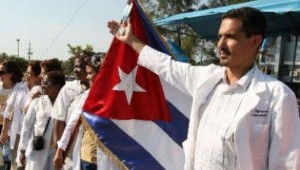 Liberian President Ellen Johnson-Sirleaf inaugurated the first of 17 new Ebola Treatment Units that are being constructed with U.S. Agency for International Development  funds. At the ceremony on Oct. 31, in Congotown near the capital of Monrovia, Johnson-Sirleaf expressed her gratitude to the countries that have contributed to the project so far.

Some of the Cuban doctors and nurses who were sent to help this West African country will work at a field hospital now being built at the former location of the Liberian Defense Ministry and connected to the ETUs. The Cubans will be responsible for running this facility, the largest of the ETUs in Liberia, housing 200 beds. The Cuban government has noted that their health care workers start working there on Nov. 3.

Ronald Hernandez Torres, a Cuban doctor now in Liberia, wrote on his Facebook page, “This unit has the best conditions for patient care and the best professionals from different countries working side by side.”  (Huffington Post, Nov. 3)

Cuban health care workers have a long history of responding to natural disasters. In 2010, Cubans were first in establishing a field hospital in Haiti after the colossal earthquake. The Caribbean island-nation has also trained countless numbers of international medical personnel at the Latin American School of Medicine in Havana.

Despite more than five decades of a U.S. blockade against Cuba, the revolutionary government is able to take a principled approach in cooperating with personnel sent by Washington in the battle against Ebola.

Granma published an article on Oct. 19 by former President Fidel Castro, saying, “We gladly cooperate with American personnel in this task [combatting Ebola], and not in pursuit of peace between the two states that have been adversaries for many years but, in any case, for world peace.”

In Sierra Leone, the growing outbreak of EVD has shifted from its rural eastern region to the urban areas, including Freetown, the capital.  Another physician died in the country on Nov. 2. Dr. Godfrey George reported that he was not feeling well and was transported from his workplace at the Kambia Government Hospital in the north to Freetown where he died.

Four other doctors have died in Sierra Leone after treating EVD patients. These deaths take a tremendous toll there, since it is Sierra Leone’s medical personnel who are on the frontlines in the battle against the disease.

Just four years ago, Sierra Leone had two physicians for every 100,000 residents. The country underwent a 10-year civil war — from which it is only beginning to recover — as well as decades of colonialism and neocolonialism.

A regional conference of the World Health Organization began in Benin on Nov. 3. The country, a former French colony in West Africa, has not reported any cases of the disease. International assistance in the campaign to defeat the Ebola outbreak was high on WHO’s agenda.

Dr. Margaret Chan, WHO director-general, stressed, “The Ebola epidemic has set back political stability and economic recovery in the afflicted countries of Sierra Leone, Guinea and Liberia.” It has taken a “heavy toll on frontline domestic medical staff.” (Associated Press, Nov. 3)

Guéckédou, a town in the southern part of Guinea, on the border with Sierra Leone and Liberia, is where this EVD outbreak is said to have originated. Anthony Banbury, envoy for the U.N. Mission for Ebola Emergency Response, said the number of cases in the area had decreased significantly.

“The first case of Ebola, in December 2013, was just down the road from here, so I was very interested and coming and seeing the situation on the ground for myself. … Happily, the number of cases in Guéckédou has gone down a lot,” commented Banbury. “Transmissions are declining and the number of cases” in the area are nearly zero. He said even though there are cases outside the town, “there’s been good progress made over these past months.” (U.N. News Centre, Nov. 1)

However, Elisabeth Faure, Guinea’s director of the World Food Program, who is also working in the field there, paints another picture of developments inside the country.  She said that her agency is now helping to build Ebola treatment centers and is transporting medical personnel and equipment to these facilities.

Despite the international attention focused on the three African states most severely impacted by the epidemic, there are still not enough resources being directed to the most distressed areas. Solidarity and human rights organizations in the Western industrialized states must demand that these governments provide the necessary medical personnel, medications and protective gear critically needed to successfully fight and eradicate Ebola.