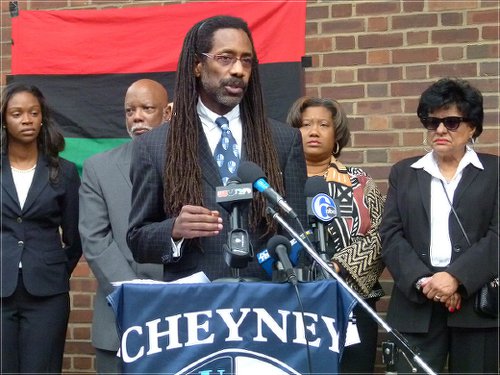 A coalition of Cheyney University supporters filed a major federal civil rights lawsuit against the Commonwealth of Pennsylvania and the Pennsylvania State System of Higher Education. The suit charges that PASSHE’s “separate but equal” education constitutes apartheid and is unacceptable. Filed Oct. 29, the suit seeks to end decades-long racial discrimination against the historically Black college.

Founded in 1837, Cheyney University was the first institution of higher learning for African Americans in the U.S. It is located 25 miles outside Philadelphia.  Cheyney eventually became part of PASSHE along with the 13 other state universities.

The coalition, “Heeding Cheyney’s Call,” is a broad-based group that includes Cheyney alums, students, professors, staffers, retirees, and civic and religious leaders as well as elected officials. HCC first brought notice of its intention to file the suit in September 2013. This was around the 30th anniversary of the anticipated settlement of the original discrimination charge.

Its stated goal in 2013 was to remedy a long-standing policy of underfunding that had left the university with a $14 million deficit. Meanwhile, the other 13 state universities, with predominantly white enrollment, enjoyed a collective budget surplus of over $100 million. HCC also cited a 60 percent drop in enrollment at the university from 3,000 in 1977 to 1,200 in 2013, as well as a lack of any new academic programs to encourage more students to enroll.

Cheyney students come from families with average household incomes of under $40,000. More than 80 percent of them rely on financial aid. The HCC coalition called for a major revision of the state’s funding-per-enrollment formulas that benefit larger schools.  While the Commonwealth claimed they could not give Cheyney more money because there are not enough students, Michael Coard, an attorney for HCC, said, “There are not enough students at Cheyney because there is not enough money.”

At the press conference held outside the Byrne Federal Courthouse in Philadelphia prior to filing the lawsuit, Sonny Harris, a retired Cheyney mathematics professor, charged that enrollment has since dropped to 1,000 students while the debt has risen to $22 million.

Harris also noted that only two new buildings were constructed at the school over the last 30 years while the lack of infrastructure improvements has left students without heat and running water in some buildings. Harris described Cheyney as the “stepchild” of the Pennsylvania university system.

In 1969, the precursor to the U.S. Department of Education ruled that Pennsylvania was one of ten states with a discriminatory system of higher education.

A civil rights lawsuit filed on behalf of Cheyney University in 1980 successfully charged the Commonwealth of Pennsylvania with racial discrimination in violation of the Civil Rights Act of 1964, the Fourteenth Amendment to the U.S. Constitution, and other federal and state laws. It cited the state’s unlawful and inequitable actions against the traditional Black university, compared to its treatment of traditionally white state-owned schools.

That lawsuit resulted in a binding agreement in 1999 with the Office for Civil Rights that funneled $36.5 million to Cheyney for building and academic upgrades. However, plaintiffs in the lawsuit filed today charge that the Commonwealth has continued to maintain an illegal and racial “dual system” of higher education, to Cheyney’s detriment.

Joseph H. Tucker, lead attorney on the lawsuit, explained that the group is not seeking a specific settlement amount but rather asking for equitable relief and for the federal government to force the Commonwealth to comply with their 1999 agreement.

“Separate but equal in education is not equal and it is not the law of the Commonwealth of Pennsylvania or the U.S.,” Tucker stated. “There needs to be parity through equity in the state education system.”