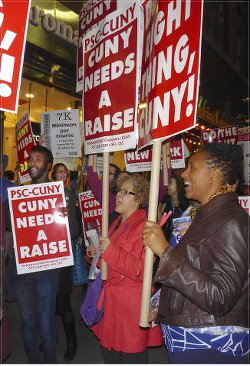 The Professional Staff Congress union represents 25,000 faculty and staff at the City University of New York. It has not had a contract since 2010, although New York state law keeps the provisions of the old contract in effect. It is the only union in New York whose contract must be approved by both the city and the state of New York.

Following a big demonstration at a meeting of the Board of Trustees at the end of September, the PSC held a large rally and march Oct. 21. At the rally, held at the Community Church of New York, the top leaders of the union explained their strategy of combining political pressure — lobbying — with street actions, both on the 21 campuses that make up CUNY and in Manhattan and Albany.

After the rally, 300 to 400 union members marched the sidewalks of Manhattan with placards, music and militancy, going past Gov. Andrew Cuomo’s office on Third Avenue and winding up at CUNY’s headquarters on 42nd Street.