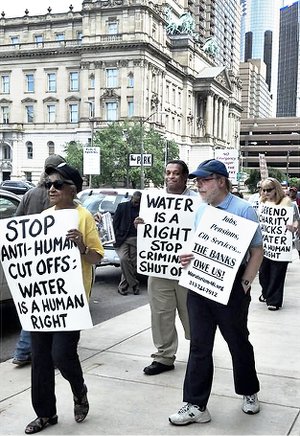 The report by Catarina de Albuquerque, U.N. Special Rapporteur on the human right to safe drinking water and sanitation, and Leilani Farha, U.N. Special Rapporteur on adequate housing, stated: “Detroit is undergoing large-scale water disconnections. This year alone, at least 27,000 households have had their services disconnected. … The utility has passed on the increased costs of leakages due to an aging infrastructure onto all remaining residents by increasing water rates by 8.7 percent. This, combined with the decreased number of customers, and increased unemployment rate, has made water bills increasingly unaffordable to thousands of residents in Detroit living under the poverty line.

“Without water, people cannot live a life with dignity — they have no water for drinking, cooking, bathing, flushing toilets and keeping their clothes and houses clean. … Denial of access to sufficient quantity of water threatens the rights to adequate housing, life, health, food, integrity of the family. It exacerbates inequalities, stigmatizes people and renders the most vulnerable even more helpless. Lack of access to water and hygiene is also a real threat to public health as certain diseases could widely spread.” (ohchr.org, Oct. 20)

At a press conference announcing their findings on Oct. 20, the rapporteurs cited the racially discriminatory character of Detroit’s shut-offs, noting the disproportional impact on low-income African Americans. Eighty percent of Detroit’s population are African American and 40 percent of Detroiters live in poverty. The rapporteurs noted how Detroiters are asked to make choices — pay rent or pay for water; pay medical bills or pay for water — and emphasized that these are not choices that should need to be made in the richest country of the world.

De Albuquerque asserted that she has visited developing countries where 50 percent of the population is without regular water due to underdevelopment. But she described the crisis in Detroit as a retrograde crisis — a developed city and country moving backward as a result of a “man-made perfect storm.”

The rapporteurs’ published statement explained: “The human rights to safe drinking water and sanitation and to adequate housing both derive from the right to an adequate standard of living which is protected under, inter alia, article 25 of the Universal Declaration of Human Rights which is fully applicable to the United States. In addition, adequate housing and access to safe water are clearly essential to maintain life and health, and the right to life is found in treaties the United States has ratified, including the International Covenant on Civil and Political Rights.

They further stated: “In line with the mandates entrusted to us by the Human Rights Council, we would like to underline that the United States is bound by international human rights law and principles. … These obligations apply to all levels of Government — federal, state and municipal. Moreover, they also extend to the various functions of State, including the judiciary.”

The rapporteurs made the following recommendations:

The rapporteurs emphasized the limits of their enforcement powers, and their conclusions were treated with disdain by Detroit Mayor Mike Duggan. However, their visit had an empowering effect on the victims of the shut-offs, who turned out in large numbers to testify before the rapporteurs, as well as the activists who are challenging the shut-offs. It was refreshing to hear from officials who place human rights and dignity ahead of profits and banks.

The struggle to stop the water shut-offs and against the cruel restructuring imposed on Detroit at all levels will continue.