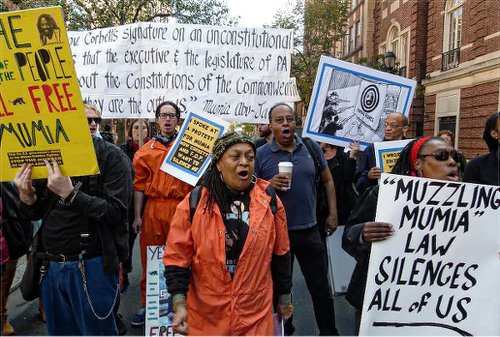 Philadelphia, Oct. 21 — Lots of media were on hand today in Philadelphia to record the moment when Pennsylvania Governor Tom Corbett put his signature on the “Revictimization Relief Act” — dubbed the “Silence Mumia Law” by civil rights activists. But Corbett had a problem: None of the media could hear him speak. Nearly 50 protesters, standing a short distance away from Corbett’s press conference at 13th and Locust streets, drowned him out with constant chants of “Our brother Mumia is under attack, what do we do? Stand up, fight back!” and “One term Tom!”

In what seemed to be a Hail Mary pass to revive his failing reelection bid, Corbett, his political business allies and the Fraternal Order of Police cynically set up shop on a sheltered, portable stage at the location where police officer Daniel Faulkner was shot and killed in December 1981. Political activist and journalist Mumia Abu-Jamal, who happened upon the scene, was framed by police for the shooting and subsequently served over 30 years on death row before being released into general prison population in 2011. Abu-Jamal maintains his innocence. 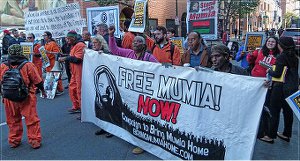 The same movement that has steadfastly fought to free Abu-Jamal responded on less than 24-hours notice to turn out on a weekday to confront the state’s latest effort to silence him. They were joined by prisoner rights groups and civil liberties forces that see the anti-Mumia law as a blanket attack on the constitutional rights of all prisoners and a dangerous precedent at a time when more attention is focused on mass incarceration.

Several protesters wore orange prison-style jumpsuits and carried signs depicting activities that will be banned under the legislation intended to muffle Mumia. One read, “I spoke out against abuse in prison, now Corbett & FOP want to silence me.”

Demonstrators also linked the efforts to silence Abu-Jamal with the government’s militarized response to those protesting police brutality in Ferguson, Mo., since the police murder of unarmed African-American youth Michael Brown. One chant today was, “From Ferguson to Philly, we say NO! Killer cops have got to go!”

A large hand-lettered sign carried a statement by Abu-Jamal for broadcast by Prison Radio in response to the bill. It read, “I welcome Gov. Corbett’s signature on an unconstitutional bill that proves that the Pennsylvania executive and the legislature don’t give one whit about the constitutions of the Commonwealth or the U.S. It proves that they are the outlaws,” signed Mumia Abu-Jamal.

Noelle Hanrahan of Prison Radio commented, “Having failed to kill Mumia in the street in 1981, and having failed to execute him during his over 30 years on death row, the FOP and the government of Pennsylvania continue to try to silence him, this time by extinguishing his speech,”

The demonstrators who turned out today made it clear that the state’s efforts are in vain. They stayed in the street for an impromptu rally that continued for some time after the Corbett forces abandoned the area.  A day of activities is planned for Oct. 22 to broaden the movement to free Abu-Jamal and to observe the national day against police brutality and mass incarceration.