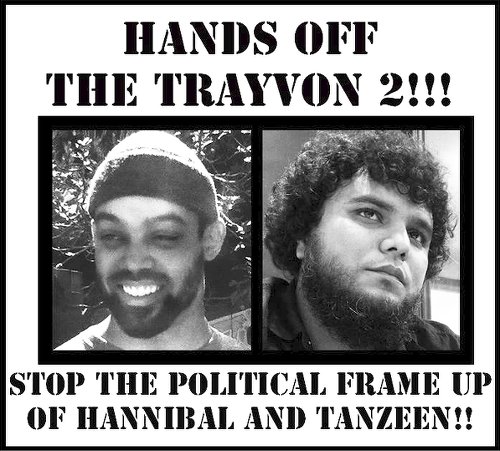 Hannibal Abdul Shakur and Tanzeen Doha were arrested during protests during the summer of 2013 in downtown Oakland, Calif., after the notorious George Zimmerman verdict was announced, where he was acquitted for the Feb. 26, 2012, murder of Trayvon Martin.  At an Oct. 10 pre-trial readiness conference, the Oakland prosecutor finally admitted that they had “insufficient evidence” to go to trial, putting forth a motion to drop the remaining charges. Workers World interviewed Hannibal Shakur about their legal and political victory.

WW: How were you originally arrested?

HS: When Zimmerman was acquitted there were a series of protests and rallies I was attending in Oakland. At one of those marches I was snatched by the Oakland Police Department. I was taken to the police station, then to the hospital, and from the hospital I was taken to the County Jail at Santa Rita. I found out at the hospital that they were charging me with vandalism and claiming I had broken a window.

WW: How did this become a felony charge?

HS: It’s my understanding that the felony was determined by the DA based on the value of the window, exceeding $4,000. Tanzeen was arrested separately. One police officer went after him and claimed that he had broken a window, and a different one went after me. There were four or five others arrested for vandalism, with one charged with assault on a cop.

We were arraigned separately at first. The DA combined Tanzeen and I as co-defendants. Even though we were at the same march, for us two to be made co-defendants, excluding everyone else who had been arrested, was something we found suspicious. Tanzeen had already been released on bail, but when they combined our cases, they bumped Tanzeen’s charge to a felony, raised his bail and issued an arbitrary warrant.

WW: I witnessed the pre-trial hearing last spring for you and Tanzeen, when they were still pressing the felony charges, and from the witnesses your lawyer, Walter Riley, presented, it was obvious that the DA had no case then. The charges were dropped from felonies to misdemeanors by the judge over the prosecutor’s objection, but he insisted on pursuing the charges at that time. Why do you believe he did, despite the clear lack of evidence?

HS: There’s been a lot of pressure on the DA to clamp down on protesters. They’re looking for a scapegoat to make them think organizing marches isn’t worth it. One of the discouragements for corporations to invest in developing these areas is there’s such a history of protests here. It represents an uncertain financial future for corporations who want to come in and advance capitalism.

We have such a mobilized community: students, workers, even different churches and mosques. The movement keeps the rapid development at bay, because there are community ties holding things together. They want certain individuals. Get those individuals who inspire people with a political analysis and offer a platform for people to unify.

We were an intersection of some different communities in the spaces we build in. We’ve been very outspoken about the fact that these are international issues; these are human rights issues; these are issues of class and issues of economic exploitation — the results of this global capitalist system that we’re dealing with.

We’re both Muslims. We believe there’s something we’re accountable to that’s bigger than the world that we’re living in. We’re not afraid of the unjust system. It’s powerful and massive, but still we find ways to resist and triumph, despite the position the system has placed us in in this society.

The thing that’s special about us is we’re people who believe in working together, sacrifice and commitment for a better world for all of us. In the case of Trayvon Martin, this is a young man who could have gone on to do anything. We know he had a high GPA, and with a young person there’s no way to predict what they’re going to manifest. He could have developed a car that didn’t need fuel or some new treatment for heroin addictions. I like to imagine that he would have done something great, because it was possible. The only thing that stopped him is this man who took it upon himself to decide whose life has value and decided to end his life.

WW: Despite the victory, the original arrests and the long period of these charges being held against you, they were at some significant costs to the two of you, weren’t they?

HS: The $7,000 to $8,000 paid to the bail bondsmen is lost. I’ve been fighting cancer since 2011. One of the most critical factors in wellness, in general, and fighting a disease like cancer is to reduce stress. This has been like a noose around my neck for a year plus. It was creating all kinds of anxiety, hard for me to think straight and function. When they arrested me, they slammed me on the ground. I was in a holding tank (at Santa Rita), laying on a concrete slab for three days. In jail they don’t observe religious practices — this was during Ramadan (fasting during the day). They only served food during the day. If someone tried to save something for me, it often had pork in it. By the time I got out, my condition was really intense.  I had head and knee injuries, could barely walk, my neck had swollen. It took about a week for me to recuperate.

WW: What plans do you have, now that the case is over?

HS: Put back those pieces of our lives; those things that have been disrupted. There’s something we’re not satisfied with. We were protesting a miscarriage of justice. We adamantly believe that Zimmerman needs to be held accountable. There’s a larger human rights issue, where if you’re a certain color in this society, then you can be murdered and it’s legal.

If someone stands up to say that your life has a value, then they’ll be punished. The government is encouraging fascism by punishing people for standing up. Looking at Ferguson, as another clear example where young people are being punished for saying that Mike Brown’s life has a value.

We have to make the bigger case in how this system is alienating us from life itself. That’s a human rights case. We’re dealing with an apartheid system, claiming to be a democracy. At the end of the day, they’re working for the corporations.

In the end, they had to dismiss the charges, because they were no longer able to continue to fight against us. We just have to persevere, keep looking for ways to bridge communities and struggles, let people know their lives are worth more than $7.50 an hour.